It goes without saying that one of the great things about being a beloved liberal is that when you write a new book, no one in the media will challenge any of the obvious falsehoods you present as facts.

Such has certainly been the case as newspapers, magazines, and television programs have gushed over former Vice President Al Gore and his new book “Assault on Reason.”

Fortunately, feeling that it doesn’t owe anyone such unwarranted sycophancy, Fox News “Special Report” on Tuesday chose to look at some of the statements made in Gore’s book, and see whether they pass the smell test.

Assault on the Great American Cookout

From the media's war on obesity to global warming, grilling and picnic foods just shouldn't be on the menu.

'Food or Fuel'? You Ain't Seen Nothin' Yet

By Dennis T. Avery, Special to BMI | May 23, 2007 11:06 AM EDT
While the media bemoan tough consumer choices stemming from the cost of gasoline, the ethanol price squeeze grows. 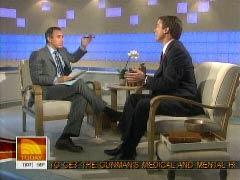 Updated with video below fold.

NBC's Matt Lauer spared no punches when he interviewed John Edwards on this morning's Today show, trouble is they were mostly left jabs. After a David Gregory report on the war funding bill, the Today co-host didn't waste any time launching into Edwards as he demanded to know why his fellow Democrats had to "cave-in."

The Global Warmingist-in-Chief, soon-to-be-Dr. Al Gore, was Larry King’s guest on CNN Tuesday, and the host, like so many in the media these days, gushed over the former vice president like a teenybopper around a rock star.

If that wasn’t enough to take, King actually asked Gore, “[W]ould you join with former President Carter in saying…that this is the worst administration foreign policy-wise ever?”

But, before we get there, the first Gore gushing came right at the beginning of the show (h/t Gary Hall):

No Blood for Lettuce

The American left loves to chant "no blood for oil." But those same liberals would eagerly sacrifice American interests in the name of . . . a cheaper Caesar salad.

Take this morning's report on CNN which came at about 7:35 am EDT. Entitled "Farm-Fresh Problems," the segment, narrated by CNN's Chris Lawrence, focused on the lack of illegal immigrant labor to harvest California's fruit and vegetable crops.

ABC's 'The Blotter' Tips Off Iran to Covert CIA Operation

Brian Ross joins a not so exclusive set of reporters who are using their positions in the national media to divulge national security secrets as passed to them by unnamed sources.

In an article honoring Dallas as "The Lavender Heart of Texas," Time writer John Cloud began with an unusually personal story of his political transformation, "trading movement conservatism for gay libertarianism." When you consider how he stereotypes conservatism as all about J.R. Ewing and an "air of profligacy," you could understand why it was easy to leave:

Why should a country go to the effort of spying on America when all they have to do is follow the US media? USA Today reported a database of phone calls and the New York Times publically exposed the SWIFT banking transaction database; both were used to combat terrorism.  Now on the May 22 edition of ABC News’ the Blotter, Brian Ross and Richard Esposito revealed another national security-related secret (my emphasis throughout):

The CIA has received secret presidential approval to mount a covert "black" operation to destabilize the Iranian government, current and former officials in the intelligence community tell the Blotter on ABCNews.com.

More Media Bury Head(lines) in the Sand on Muslim Poll

By Ken Shepherd | May 23, 2007 1:15 AM EDT
We reported yesterday about the evolving headline for an AP story on a poll showing a quarter of American Muslim males think that terrorism is sometimes justifiable.

Well now Ace of Spades took it a step further, taking a wider look at how other news agencies are similarly downplaying the alarming statistic with headlines that spin the results positively.

It's worth the read, although I have noticed that at least one headline has changed since Ace's post:

Olbermann Mocks Limbaugh, Then Concedes He Only Listens When Forced to on Toilet

MSNBC's Keith Olbermann on Tuesday night teased his “Worst Person in the World” segment by plugging “comedian Rush Limbaugh with a strong entry tonight whining that nobody at MSNBC actually hears him on the air. I know this because I heard him on the air.” In the subsequent segment, Olbermann recounted how Limbaugh complained “that the liberal media, particularly MSNBC, never actually listens to him while he's on the air and thus gets things,” like what Olbermann impugned as “his racist Al Sharpton/Barack Obama song, second-hand and out of context.”

Olbermann boasted of how “I happen to know he said all this because today I was actually listening to him while he was on the air.” But far from contradicting Limbaugh's point about how members of the “drive-by media” don't listen to him, Olbermann confirmed it as he explained that he only heard Limbaugh's comments because he “was at ABC Radio in New York where I do the Dan Patrick Show from” and “listening from the perfect venue where they pipe in comedian's show and you can't turn it off -- the toilet!” Nonetheless, Olbermann named “comedian Rush Limbaugh” as “today's Worst Person in the World!”

Kudos to Couric: Highlights Pro-Terrorist Views of Fourth of Young Muslims in America

On Tuesday's CBS Evening News, anchor Katie Couric allocated a few seconds to alerting viewers to how a new poll discovered that a significant minority of Muslims in America hold “disturbing” views on the acceptability of suicide bombings and who carried out the 9/11 attacks. Neither the ABC or NBC evening newscasts mentioned the new non-network poll released Tuesday by the Pew Research Center for the People and the Press.

Over the weekend Chris Matthews asked the panel on his syndicated program to answer Hillary Clinton's call to help find an official song for her campaign and while Matthews and most of the media panel suggested songs that stressed Hillary's perceived positives, NBC's Andrea Mitchell topped them all when she offered Helen Reddy's 70s' feminist anthem: "How about 'I Am Woman, Hear Me Roar?'"

When New York Times columnist David Brooks, the one resident conservative on the panel, suggested a not so celebratory song title, Hall&Oates 80's hit, "Maneater," Mitchell cringed, letting out a painful: "Oooh!"

The following exchange occurred on the May 20th edition of the syndicated The Chris Matthews Show:

Okay, I don't really get this, but apparently Stone Phillips, the just-laid-off "Dateline NBC" anchor, tops the list at "Google Trends" today.

You don't believe me?! I thought you wouldn't. See screencaps below the fold. By comparison, the late Jerry Falwell, whose funeral was today, came in at only #10.

A Tale of Two Bishops and One Bias: Reuters Skews Story on Anglican Conference

"Gay bishop snubbed by Anglican conference" reads the headline for the May 22 Reuters article by Luke Baker. But take a look at the lede and second graf and you'll see there are two bishops to be excluded from the gathering of Anglican prelates: