In Washington, many people look to Washington Post TV critic Tom Shales to see how the President's State of the Union went, at least as a televised event. Shales said it was competent, if forgettable. But his opening paragraph was bizarre:

Massachusetts Senator John Kerry must be thinking how fortunate he was that there were no real journalists in the room -- just perky Katie Couric -- when he appeared on NBC’s Today to complain about President Bush’s State of the Union address. As NewsBusters’ Mark Finkelstein noted earlier, Couric did ask a couple of pointed questions, at one point asking Kerry if there “was there anything you appreciated or liked hearing” in Bush’s speech.

But when Kerry started inventing statistics in his rant against the President’s education policies, preposterously claiming at one point that “53 percent of our children are not graduating from high school,” (in fact, 73.9 percent of incoming freshmen graduate from high school, according to the most recent Department of Education tally) Couric never even blinked -- not even when Kerry haughtily accused Bush of not presenting “the real state of the Union.”

With help from Mr. Baker's blogs, and the kindness of Duran Duran-loving editors at NRO, my overnight analysis of the State of the Union is posted on National Review Online today.

Sometimes, it's interesting to follow the choice of words reporters use and wonder whether they mean to send subtle signals. Yesterday morning, in Bill Plante's report on the "Early Show" on why the State of the Union speech might be important for Bush, David Gergen explained in a soundbite that it could be crucial for maintaining the GOP majority in the next two election cycles. 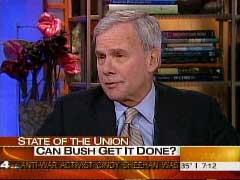 Liberals hate to be accused of having a pre-9/11 mentality. But how else can you describe it when two leading MSM lights dismiss the war on terror as a political ploy that President Bush has taken to "extremes"?

That's exactly what happened on this morning's Today show. Matt Lauer, conducting a SOTU post-mortem interview of Tom Brokaw, wrote off W's war on terror as a political tactic:

While CBS News coverage of the State of the Union speech showcased the bombast of New York Times columnist Tom Friedman, the ABC News coverage was the most hostile to Bush and conservative policies with its analysis delivered through a liberal prism. Anchor Elizabeth Vargas began the evening by emphasizing Bush’s low approval rating fueled by “an inept response to Hurricane Katrina, and the indictment of a high ranking White House official and, of course, growing dissatisfaction with the war in Iraq.” She resurrected Watergate as she highlighted how Bush’s 42 percent approval level “is the worst for a President entering his sixth year in office since Watergate hammered Richard Nixon." Charles Gibson noted that Bush “tries to unite,” but then painted Democrats as victims of Bush deceit as he stumbled through an adage which many have mocked Bush for once messing up: “A lot of Democrats feel this has not been a uniting President. They have gone down that road before trying to work with the President, and of course the old expression is, ah, ‘Fool me once, ah, shame on you. Fool me more than once, fool me twice or ten times, shame on me.'”

Following the speech, Vargas noted how Bush had offered an “olive branch” to Democrats. That prompted Gibson to again suggest that Bush is more to blame for partisan fighting: "Yes, he did. And you wonder if he had done this four years ago, five years ago, if indeed there might have been greater comity in the city of Washington, greater cooperation in the city than there has been so far through the Bush presidency." Gibson also relayed the odd analysis, from ABC’s political team, that of 62 paragraphs in the speech, “48 could have been given verbatim by President Bill Clinton.” Dr. Tim Johnson, a “single-payer” advocate, complained that on health care Bush “was just...tinkering with the system that is basically broken.”

Of the broadcast networks, ABC uniquely highlighted the Spanish language Democratic response from LA Mayor Antonio Villaraigosa. Vargas relayed how he “blamed the Bush administration's, quote, ‘reckless policies for increasing the national debt, the number of uninsured Americans, including 39 percent of Latinos, and the number of failing students and the ranks of the poor.'" As if one Democratic response were not enough. (Transcripts follow.)

Picking up on President Bush’s assurance, in his Tuesday night State of the Union address, that military decisions in Iraq will be made by military leaders, MSNBC’s Chris Matthews and Joe Scarborough rejected the notion of any such military independence, but during ABC’s coverage, when Charles Gibson similarly questioned if the military will be able to determine troop levels, retired General Jack Keane, Vice Chief of Staff of U.S. Army from 1999-2003, maintained that the feared political pressure is an illusion. Matthews asserted that the Generals in Iraq were not “really given the freedom to say how many troops they needed because when Shinseki said this is going to take a couple of hundred thousand troops, not a hundred thousand troops, he was cashiered. So this idea that these guys are free to think out loud, I thought, has been yet to be proven." Scarborough echoed: “They parrot, for the most part, the Generals and the Admirals, 99 percent of them parrot” the Pentagon. Keane contended on ABC that the idea that “the military commanders are under some kind of pressure from the administration” is false and military commanders will “call the shots as they see them.” (Transcripts follow.)

Matthews: Bush a Hypocrite on “Civility” Since He “Jammed” Iraq Vote Before Election 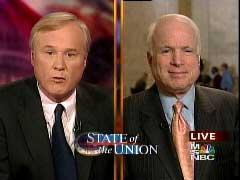 President Bush didn’t play for with Democrats in 2002, MSNBC’s Chris Matthews complained to Senator John McCain just before 11pm EST Tuesday night. Raising how in his State of the Union address Bush had made an “appeal for comity, for civility,” Matthews charged when Bush wanted authorization for military action against Iraq, “he jammed that vote right up against the election of 2002. 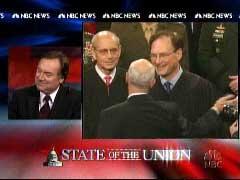 The saying goes that the Palestinians never miss an opportunity to miss an opportunity. Along the same vein, NBC’s Tim Russert never misses an opportunity to denounce a tax cut or pass along arguments in favor of raising taxes. And NBC anchor Brian Williams didn’t even have to mention taxes to lead Russert, a few minutes after President Bush finished his State of the Union address Tuesday night, to fret about how Bush hasn’t raised them.

Word of the Night for the Public Mood: “Sour” -- Employed by ABC, CNN and Fox 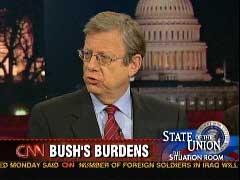 Before President Bush’s Tuesday State of the Union address, at least three network reporters seemingly read from the same talking points as they described the public mood with the exact same word: “sour.” As noted in an earlier NewsBusters item, on World News Tonight, ABC’s George Stephanopoulos insisted that “the country is just in a sour mood.” About 90 minutes before Bush’s address, CNN’s Jeff Greenfield wondered “whether the President c

In the article, "Sheehan Arrested in House Gallery", CNN.com completely ignored the facts of Cindy Sheehan's meeting with President Bush in June 2004. Instead of reporting Cindy's own words to David Henson, staff writer for the Vacaville Reporter, CNN relied on talking points from Cindy's public relations team.

It turns out that media coverage of the nation’s economic growth can vary a lot depending on how strong or weak the economy is doing. Strong numbers are downplayed or undermined and weak numbers like the fourth-quarter results are highlighted in some of the major media.

The Commerce Department released the fourth-quarter Gross Domestic Product (“GDP”) January 27, and the 1.1 percent growth was well below the 2.8 percent analysts had predicted. Though the stock market rose by 98 points and the dollar rallied strongly against most other currencies, much of the news was strongly negative. Articles over the weekend had phrases like “The economy slowed to a near crawl in the final quarter of 2005, a listless showing that was the worst in three years,” and “Those numbers suggested that the economy is slowing – and an end is in sight to free spending.”

One of the most bearish reports came from that evening’s “NBC Nightly News.” Reporter Anne Thompson began her segment in a similar vein:

By Lyford Beverage | February 1, 2006 12:01 AM EST
Well, we've now got the AP's analysis on the President's State Of The Union address tonight, and it is nothing if not predictable. Frankly, one wonders whether Ron Fournier even bothered to wait until the speech had started, never mind ended, before producing this news analysis.

ABC the Most Negative Before SOTU Address: State of the Union “Sour” 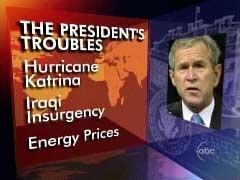 Of the three broadcast network evening newscasts on Tuesday, ABC’s World News Tonight delivered the most downbeat take on the public attitude facing President Bush as he delivers his State of the Union (SOTU) address.

Rall: US Military No Different Than Terrorists

What do you get when you cross a so-called editorial cartoonist with a person that hates the Military, Republicans, President Bush and America?  If you answered “Ted Rall”, you hit the nail on the head.