By Lyford Beverage | February 10, 2006 10:07 AM EST
Vice-President Cheney spoke, last night, to the annual Conservative Political Action Conference (CPAC) in Washington. The AP has a snippet of his speech in their video stories this morning. The passage that they've got up includes the following from the Vice President, speaking on the NSA Terrorist Surveillance Program:

Perhaps inspired by the discovery of new species in New Guinea, Katie Couric has claimed a discovery of her own: a new breed of terrorists that are "not as vicious."

Over at the NBC Nightly News "Daily Nightly" blog, NBC "investigative producer" Robert Windrem relates how at the 2:30 pm editorial meeting on Wednesday, "we had a lively discussion of what the context should be" about the Muslim cartoon jihad. For his part, Windrem agreed with local liberal academics, who somehow can link cartoonists to police brutality:

NYT Has Trouble Understanding Presidential Rebuttal to its Distortions

You have to love it when reporters play dumb. The case for the NSA program, approved by the American people in nearly all polls (sometimes by as much as a 2-1 margin) understand, fund and support the program. 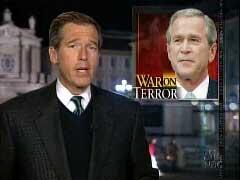 But there are questions."

Reporting on President Bush’s Thursday speech in which he detailed a foiled al-Qaeda attack on a Los Angeles office tower, the three broadcast network evening newscasts fretted about the timing in relation to controversy over “domestic eavesdropping.” ABC co-anchor Charles Gibson cued up George Stephanopoulos, “Democrats in Washington immediately began asking: Why is the President talking about this now?” Stephanopoulos contended “there is a lot of politics at play here,” but portrayed Democrats as the victims as he relayed how “Republicans hope that this war on terror issue is going to be the key to have them keeping control of the House and the Senate in these 2006 mid-term elections” while Democrats “know” they “can’t let Republicans play the fear card.”

CBS’s Jim Axelrod maintained that “the eavesdropping issue is starting to cut just a little bit differently, as even some Republicans now are starting to call for more oversight" and “the President's speech came at a time when his tactics in the war on terror are under attack from some quarters with the eavesdropping controversy consuming Washington.” It certainly is “consuming” the press corps. Axelrod zeroed in how “the White House won't go anywhere near this question of whether the eavesdropping program had anything to do with the foiling of this West coast bomb plot, won't go anywhere near it. But checking across the government today, we couldn't find one single U.S. official to say that it had.” Jim Stewart reported that “they got this information not from any wiretap, but from what they called the rigorous questioning of some al Qaeda detainees.” To which Bob Schieffer translated: “Torture." NBC’s Brian Williams opened: “The White House says it was just a coincidence that during this time while the President is under fire for a program of domestic eavesdropping, and while he's been trying to renew provisions of the Patriot Act, he just happened to choose today as the day to talk about a planned terrorist incident in the U.S. that was thwarted.” (Transcripts follow.)

Nancy Soderberg, a former Ambassador to the United Nations and Foreign Policy Advisor under the Clinton administration, repeated the often-heard myth that President Clinton prevented Millennium attacks on the United States. Soderberg made the debunked claim as a guest on tonight's episode of The O'Reilly Factor (Thursday, February 9, 2006).

Viewers of today's American Morning on CNN were treated to co-host Miles O'Brien's view of scientists who dare question the validity of global warming. In a debate between Reverend Jim Ball, director of the Evangelical Environmental Network, and Reverend Richard Land, president of the Southern Baptist Convention's ethics commission, shortly after 8:15am, O'Brien revealed his beliefs.

Miles O'Brien: "You know, I know that science and religion are often at odds, but the scientific evidence is overwhelming at this point. Are you denying that?"

O'Brien: "Scientists who are bought and paid for by the fossil fuel industry, usually."

Land: "Well, not, not necessarily. I'm not going-"

By Ken Shepherd | February 9, 2006 2:00 PM EST
In New Hampshire on February 8, President Bush gave a simple lesson journalists could use. He compared slowing spending growth to driving the speed limit, rather than cutting spending, which would be like putting your car in reverse. The media, however, chose to steer readers wrong with an insistence on calling spending increases cuts and amplifying liberal outrage for not spending enough money.

Medicare, Medicaid, and Social Security are getting funding

Ken Shepherd forwarded to me another piece of evidence that the NAACP has thrown its old attempted bipartisan stance, last seen in the Benjamin Hooks era, out the window. Reporter Hazel Trice Edney, a Washington correspondent for the National Newspaper Publishers Association ("The Black Press of America"), has this report in the Baltimore Times and other papers:

Lizette Alvarez reports from Denver Thursday on the Army’s drive to recruit more Hispanics in “With Charm and Enticements, Army Is Drawing Hispanic Recruits, and Criticism.”

She paints the drive in a negative light:

Imagine you're the host of a morning news show, and the head of the country's major opposition party has just invoked the danger of the President of the United States turning the country into a police state akin to Iran. Would you perhaps ask a follow-up question challenging your guest to substantiate his inflammatory remark? No, you wouldn't. At least, not if you're GMA's Charlie Gibson. For when Howard Dean made just such an allegation this morning, Gibson never blinked.