Readers of a September 22, 2005, Newsbusters story, posted by this writer, may be pleased to see that the Anti-Defamation League (ADL) has written a letter to Air America radio host Randi Rhodes.

CNN Concerned About Propaganda in the Media

People outside of Prince George’s County, Maryland might not be aware of it, but the Pentagon launched a new cable channel recently, and CNN is concerned that this might be a violation of a 50-year-old law barring the government from creating propaganda. CNN’s Jamie McIntyre reported on today’s “Anderson Cooper 360 Degrees”:

“The Pentagon Channel originates from studios here in Alexandria, Virginia. There's everything here you'd expect to find in a modern television station, cameras, teleprompters, computers. The one thing it says it doesn't have is an agenda to advance administration policies.”

However, to counter this view, McIntyre asked the opinion of former CNN correspondent and current University of Delaware Professor Ralph Begleiter:

“You want to have radio free America or some such hypothetical title, broadcasting propaganda to the United States, no. We don't allow that in this country. It's a law.”

What follows is a full transcript of this report, along with a video link. 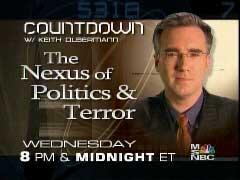 This week, Keith Olbermann, the host of MSNBC's Countdown show, is continuing to push his latest conspiracy theory that terror alerts have been politically timed to distract attention away from events embarrassing to the Bush administration, or for other political reasons.

By Rick Moore | October 11, 2005 10:58 PM EDT
The dead tree news media is suffering these days and their readership is aging. This is not a sign of good things to come for the newspaper industry (from the Star Tribune):

Newspaper readership is down. Fewer young people are picking them up, and the average age of a newspaper reader is now 55, according to a Carnegie Corporation study. Many papers have been losing circulation at alarming rates across all age groups.

By Bob Owens | October 11, 2005 10:29 PM EDT
If you a member of the media and you intend to snipe at a critic over the quality of localized newspaper reporting, you might want to start by not mischaracterizing what he says.

Jay Rosen of PressThink takes Raleigh, NC News and Observer Executive Editor Melanie Sill to task on her blog for getting it wrong.

Chicago Trib's Jim Warren: Conservatives Never Satisfied, So Bush Should Lie to Them?

The opposition from the religious right faced by the fictional Republican presidential candidate on NBC's The West Wing, symbolizes for Jim Warren, the former Washington Bureau Chief for the Chicago Tribune who is now a Deputy Managing Editor for the paper, how real-life conservatives, upset over the Harriet Miers pick, will never be satisfied. On Tuesday's Hardball on MSNBC, Warren admired how the fictional drama's Alan Alda character “confronts a top Christian Right official who insists on a public pledge that Alan Alda, if elected President, will only pick anti-abortion judges to the federal court. And Alan Alda, seeing the world as much more complicated, declines to do that.” Warren asked and answered his own question: “Why is that relevant? I think it's relevant because just like Bill Clinton could never satisfy his left, it seems that Bush can never satisfy a group for whom he has cut taxes, delivered Saddam Hussein on a platter, done what they want on late term abortion and stem cell research, come out against gay marriage and picked a whole lot of conservative judges.”

Full transcript of his proposition, and the West Wing scene, follows.

"A Magic Moment" with Loony Bush Hater on the Taxpayer Dime

By Ken Shepherd | October 11, 2005 6:11 PM EDT
Now with David Brancaccio on PBS last Friday was a special treat for conservative taxpayers. Brancaccio conducted a fawning interview with Kurt Vonnegut, a novelist who spent most of his time either attacking the Bush administration or more generally whining about life.

After a half-hour of failing to challenge Vonnegut's nuttier statements, Brancaccio gushingly declared: "Well, I think it's easy to notice that some moments with you Mr. Vonnegut add up to I think a magic moment.

By Brent Bozell | October 11, 2005 4:42 PM EDT
One year after the credibility of CBS News collapsed over their use of fake memos against George W. Bush, lame attempts to rehabilitate CBS seem to be everywhere. Dan Rather is now telling anyone who will listen that after defending the report, then apologizing for it, he now thinks it’s true again. Al Gore is suggesting Rather was demoted because the all-powerful White House was angry. At a ceremony for the news and documentary Emmy awards, ABC’s Ted Koppel and MSNBC boss Rick Kaplan scrambled like the King’s men reassembling Humpty Dumpty. But the eggy mess remains.

By Ken Shepherd | October 11, 2005 3:14 PM EDT
In today's Washington Post, liberal columnist and former staff writer E.J. Dionne salutes Bill Buckley on the 50th anniversary of National Review and on Buckley's part in shaping and promoting conservatism as an ascendent political movement over the past 50 years.

Yahoo Inc.'s online news search tool on Monday added Internet journal entries as a supplement to professional media offerings — an experiment that figures to test the public's appetite for information from alternative sources....

Yahoo's inclusion of blogs in its news section represents another validation for a growing group of people that are bypassing newspapers, magazines and broadcast outlets to report and comment on topical events.

By Greg Sheffield | October 11, 2005 2:00 PM EDT
New York Times executive editor Bill Keller spoke on a wide range of issues during a lunch with members of the Association of National Advertisers.

Former FBI Director Louis Freeh wasn't on this morning's Today show for very long before his credibility was immediately questioned by Couric. After her introduction and a generic 'why did you want to write this book?' query Couric pounced in just her second question:

Couric: "You know many people have viewed this book in reviews and, and newspaper accounts so far as your effort to settle scores with the President. Do you think, you obviously, there's no love lost between the two of you, that's very, very clear. Do you think your personal animus might be coloring your professional perspective so much that you can't be objective about what was really going on during the administration?"

While the buzz around Freeh's book surrounds his account of the Clinton scandals Couric managed to ask just two questions about them before to asking about the FBI's pre-9/11 preparedness.

By Clay Waters | October 11, 2005 10:59 AM EDT
The New York Times' resident iconoclast columnist (anti-recycling, pro-gas tax) John Tierney unloads on liberal bias in the media in his Tuesday column (sub. req'd). The piece from libertarian-leaning Tierney comes with the usual Times' head-scratcher of a headline, "Where Cronies Dwell," but the text box gets right to his point: "The left has a lock on journalism and law schools."