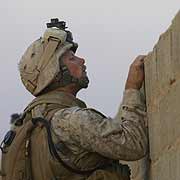 As reported yesterday by NewsBusters, a brand new ABC News/TIME poll depicted Iraqis as being very optimistic about themselves and the future of their country. The Associated Press via USA Today is sharing this information with its readers by focusing attention on the negatives first. The article, entitled “Most Iraqis Oppose U.S. Troops, Poll Says,” began:

“Most Iraqis disapprove of the presence of U.S. forces in their country, yet they are optimistic about Iraq's future and their own personal lives, according to a new poll.

“More than two-thirds of those surveyed oppose the presence of troops from the United States and its coalition partners and less than half, 44%, say their country is better off now than it was before the war, according to an ABC News poll conducted with Time magazine and other media partners.”

Then the article addressed the positives:

washingtonpost.com is its own kingdom in many ways, with more content, more readers and at least as many issues that beg for accountability as the newspaper. So bravo to Post ombudsman Deborah Howell for writing about the website in her Sunday column. Most visitors to the site have no idea how separate the operations are, but its reporters sure do:

Diane Sawyer Asks Whether the Pope Has a Christmas Credibility Problem 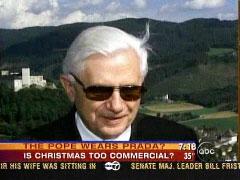 Pope Benedict XVI recently encouraged Catholics to remember the true meaning of Christmas and to not focus on the shopping aspect. After the speech, the first thing Diane Sawyer thought of was his shoes, his Prada shoes, and how they may represent a credibility problem for the Pope. 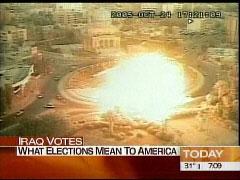 Somehow, I doubt that was the headline in the wake of D-Day.

Yet this morning, the Today show viewed the impending Iraqi elections largely through the prism of bringing US troops home.

Olbermann's Crusade Against Fox News, and Why It's Worse than You Thought

By Mark Koldys | December 12, 2005 2:46 AM EST
We've had a War on Poverty, and a War on Terror. But the war of special interest to us is the War against Fox. The soldiers fighting in the axis against FNC include ideological purists and rabid partisans. But there is another musketeer in their army.

Given his philosophical bent, it is not surprising that Mr. Keith Olbermann would join in the assaults. Still, it is unusual for an on-air personality to regularly attack the personnel of a competitor. Whether this violates some sort of unwritten rule or protocol in the journalistic community we cannot say. But when the vilifications are of dubious accuracy, and the tone becomes personal, they are not principled criticisms, but rather egotistical indulgences.

At my personal blog, I have detailed Mr. Olbermann's November 2004 insults about Bill O'Reilly, how O'Reilly didn't say what Mr. Olbermann claimed, and how Mr. Olbermann--even when proven wrong--refused to make any kind of correction. In February, he ginned up an issue about Mr. O'Reilly college punting record. This was fodder for three broadcasts and a blog entry, but through it all he never bothered to note the official statement from Marist College. They concluded Mr. Olbermann's remarks were erroneous, as did others.

Similar snipes were increasingly common as the months went by: references to "the Jeff Gannons of Fox News", and "the President's fan-club tv network at Fox News"; he wrote that Fox was equivalent to the propaganda newscasts from 1984 (a novel and film about a totalitarian society). But anyone who thought Mr. Olbermann had learned a lesson about recklessly inaccurate charges was in for a disappointment.

In its usual over-the-top manner, the New York Times has once again treated the destruction of New Orleans/>/> due to ravages of Hurricane Katrina as a product of the Bush administration.

ABC News, TIME Magazine, and the Trickling Out of the "Great News From Iraq" Poll

There’s a new poll out, done by Oxford Research International for ABC News and TIME magazine. Unfortunately, unless you were watching “This Week” on ABC this morning, or this evening’s “World News Tonight,” you likely missed it.

Slate Editor: "It's Not Impossible to Imagine" That Bush Would Bomb Journalists

Jacob Weisberg, editor of the liberal, Washington Post-owned online magazine Slate, has asserted the credibility of a printed rumor that President Bush likes the idea of lethal retaliation against reporters opposed to the U.S.'s Iraq policy.

Newsweek: “Bush Might Be The Most Isolated President in Modern History”

The latest issue of Newsweek featured an almost 4,000 word article – written by Evan Thomas and Richard Wolffe, with assistance from Holly Bailey, Daniel Klaidman, Eleanor Clift, Michael Hirsh and John Barry – that painted a pretty bleak picture of President Bush as possibly being “the most isolated president in modern history.” The authors referred to Bush as being in a “bubble” that blocks out thoughts, policy suggestions, and ideas that he is either unwilling or intellectually incapable of absorbing. Some of the lowlights:

By Mike Bates | December 11, 2005 9:34 AM EST
Today's Chicago Tribune carried a New York Times News Service article on the passing of Eugene J. McCarthy. The story notes: "As a senator, Mr. McCarthy was an unabashed liberal unafraid to take on Sen. Joseph McCarthy (R-Wis.) and his alarmist warnings about the communist menace."

No doubt Senator Eugene McCarthy was an unabashed liberal on many issues.

Colunmnist Charles Krauthammer's Weekly Standard essay on the moral defensibility of torture in fighting terror has raised eyebrows, and the New York Times tries to gin up more controversy in a feature on Krauthammer for the Sunday Week in Review.

In a TV-journalism age in which a good haircut and a sharp suit often seem to count for more than substance, there's something admirably old-school about Barry Schweid. Old, and unapologetically schlumpy, Schweid is the antithesis of TV's Sharp-Dressed Man.

Even so, on Fox & Friends Weekend this morning, Schweid let his liberal leanings show.

On MSNBC's Hardball Friday night, four weeks to the day after he devoted his show to trying to convince viewers that the Bush administration tried to make the American public believe Iraq was involved in the 9/11 attacks to sell the Iraq War (see earlier Newsbusters posting for details), Matthews again pushed this myth, claiming that "many, many times" between the 9/11 attacks and the Iraq invasion, "the case was made that we were going after them, the people that had attacked us.

While conservative talk radio blazed this week over DNC chair Howard Dean's comments on Iraq, that the idea we're going to win is "wrong," an important question arises: did the average American who does NOT listen to talk radio, but relies on network morning or evening news, hear the same uproar? Are the aware of the brouhaha? Don't bet on it. A quick search of the name "Howard Dean" in Nexis from Sunday to Friday showed no Dean mention on ABC. None on CBS.