Early reporting on Tuesday’s Republican primary upset in Virginia’s 7th Congressional District indicated that Dave Brat’s stand on immigration reform was the main reason Brat defeated Eric Cantor, but Esquire political blogger Charles Pierce isn’t buying it. In a Wednesday post, Pierce argued that the immigration issue was less important than Brat’s opposition to the idea that “the national government should work at all.”

Pierce also claimed that Brat’s victory shows yet again that President Obama will never find common ground with today’s hard-right GOP, and quipped that Brat’s efforts to synthesize Christianity and Randian economics are “more appropriate to the Cirque du Soleil than to a political philosophy.”

…Brat got a huge lift on [immigration] by a flock of talk-show and Intertoobz harpies including Laura Ingraham, Michelle Malkin, and Mark Levin...But those are all secondary to the fact that Dave Brat beat Eric Cantor because the latter could be framed effectively to the Republican primary electorate as at least trying to act like an actual member of Congress. Thus did Eric Cantor become the latest victim of the prion disease that has been eating away at the brain of the party since the Goldwater campaign… 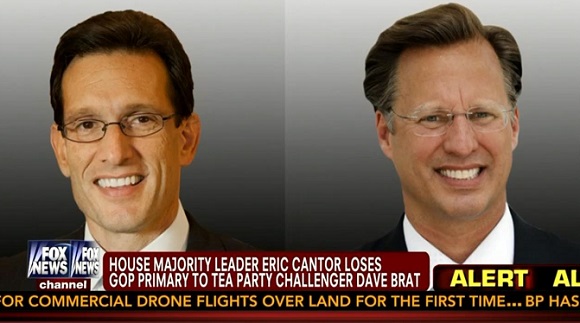 It wasn't just the fact that Cantor flirted with immigration reform. Brat also hit him for voting to raise the debt ceiling…and for voting for the Ryan-Murray budget plan, and for voting to end the government shutdown. In other words, Dave Brat was elected because he ran against the very few things that Eric Cantor did that remotely helped the government simply to function...Any pundits who ever again criticize the president for not "compromising" with a party that thinks this way -- and is proud that it does -- deserve to have their keys to the Green Room icebox confiscated.

…Brat seems a very bad combination of serious religious quester and devout Randian economist, a combination that would have had Ms. Rand herself reaching for the opium pipe…

...[Brat] says his religious background informs his views on economics. "I've always found it amazing how we have the grand swath of the Judeo-Christian tradition, and we lost moral arguments on the major issue of our day," he says, referring to fiscal-policy issues.

What's that mean? Who in hell knows, although any attempt to marry Niebuhr's theology with Rand's economics and general view of the world -- to say nothing of her atheism -- is going to be more appropriate to the Cirque du Soleil than to a political philosophy. Nevertheless, Professor Dave Brat has taught his first lesson. The worst possible thing any Republican politician can do -- even a powerful politician, even a member of the congressional leadership -- is to demonstrate, however faintly, that the national government should work at all.