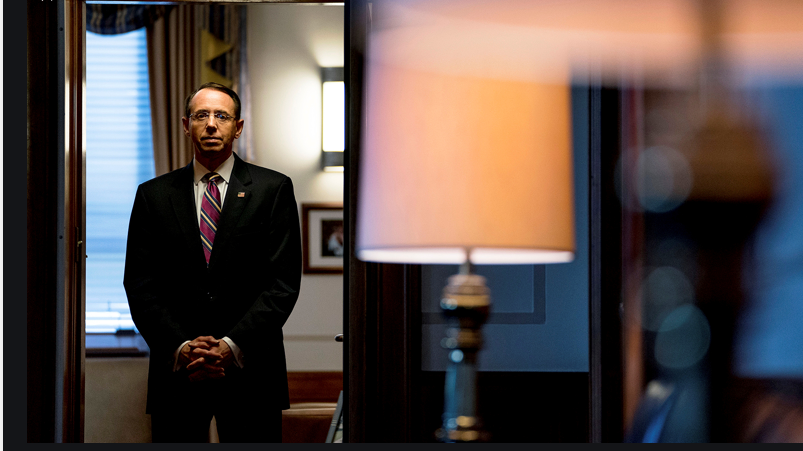 The conservative group Judicial Watch uses Freedom of Information Act requests to get documents that other reporters aren't requesting...and sometimes they find communications between top government officials and the "mainstream media."

In their latest release of documents on then-Deputy Attorney General Rod Rosenstein, Judicial Watch included some routine behind-the-scenes maneuvering between Rosenstein and reporters at the time he appointed Robert Mueller to investigate that non-existent Russian collusion.

Rosenstein was a powerful man, perceived by the press as having the entire Trump presidency in his fingers. So they were sucking up. They were preparing stories that are called "beat sweeteners," chummy stories praising the new power player so they could get his anonymous information in their back channels.

On the night of May 17, 2017, the day of Mueller's appointment, CBS 60 Minutes producer Katherine Davis was oozing:

Davis: “Good call on Mueller. Although I obviously thought you’d be great at leading the investigation too. One question: Mueller has the authority to investigate and prosecute, right? So would DOJ be involved if there was a prosecution? I'm unclear as to what DOJ's role is in any future prosecution in this case. Can you clarify?”

Rosenstein: “Off the record: This special counsel is a DOJ employee. His status is similar to a US Attorney.”

Davis: "So he reports to you? Or AG Sessions?"

Rosenstein: "Off the record: AG, or acting AG if the AG is recused."

Rod doesn't offer Word One before "Off the record."

On that same night of May 17, 2017, Rosenstein emailed with Washington Post reporter Sari Horwitz:

Horwitz: “Now, I see why you couldn’t talk today! Obviously, we’re writing a big story about this. Is there any chance I could talk to you on background about your decision?”

Rosenstein: “At some point, I owe you a long story. But this is not the right time for me to talk to anybody.”

Horwitz: "I look forward to that."

Ruiz emailed Rosenstein a summary of the article, and he responded with off-the-record comments and clarifications. Ruiz tried the pre-story charm in her e-mail:

People have described you as an apolitical prosecutor at the Department of Justice; they have said you are skilled at staying focused on the law and tuning out political noise.

Then she warned that Obama people would have a case where they thought he was overzealous, to draw him out.

Rosenstein -- assisted by then-DOJ publicist Sarah Isgur -- offered his take (but most of that is redacted). Rosenstein and the media wanted Mueller's appointment after Jim Comey's firing to sound exquisitely non-political. Ruiz (and Julie Hirschfield Davis) wrote: "The sequence of events suggested Mr. Rosenstein was determined to keep the investigation from being imperiled by the political tumult and wanted to reassert his own independence from it."

I'm guessing that Rosenstein was the person "with knowledge of the discussion" he had. Sources are slippery!

The day after the firing, in an at-times tense conversation with Donald F. McGahn II, the White House counsel, Mr. Rosenstein stressed that he did not want to be part of an effort to obfuscate or “massage” the facts about it, according to a person with knowledge of the discussion.

Always remember that a large chunk of media-government interaction takes place with zero transparency. But both sides -- powerful journalists and powerful sources -- are seeking professional advancement, and most of these business transactions are very secretive.