At The Corner on National Review Online, Jonah Goldberg passed along this precious nugget from Brit Hume's "Grapevine" on Fox News Channel:

The Moral Relativism of the Boston Globe: Killing of Innocent and Guilty Equated 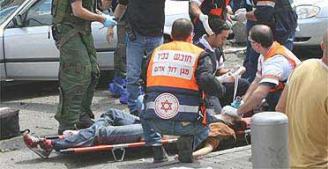 On Monday, for the second straight weekday, Access Hollywood's New York correspondent, Tim Vincent, a veteran of the BBC, sported a hammer and sickle T-shirt as he introduced a story. Just as on Friday's show, as documented in an April 15 NewsBusters item, though he wore a jacket over the red shirt with the symbol of the regime which murdered tens of millions and oppressed hundreds of millions more for decades, a gold hammer and sickle was clearly visible inside a gold-outlined red star which, sans the hammer and sickle, would match the Soviet's Red Army emblem. On Friday's edition of the half-hour entertainment news program produced by NBC and aired on all NBC-owned stations (as well as other stations across the country), viewers saw Vincent in the shirt as he led into a preview of the American Dreamz movie. On Monday, viewers couldn't avoid him in the shirt as co-host

Nancy O'Dell set him up and he introduced a piece on his role as an extra in an upcoming Nicole Kidman film.

Given Vincent's identical attire and the same background of Rockefeller Plaza, NBC's headquarters, I'd presume both segments were taped at the same time last week.

Washington Post fashion writer Robin Givhan grabbed the “Criticism” award “for her witty, closely observed essays that transform fashion criticism into cultural criticism.” In a January 2005 piece featured by the Post in a new page created to showcase her Pulitzer-winning work, Givhan complained that at a gathering of world leaders to mark the 60th anniversary of the liberation of Auschwitz, Dick Cheney “was dressed in the kind of attire one typically wears to operate a snow blower.”

On Monday’s “Countdown,” host Keith Olbermann demonstrated, as he regularly does, why he should have stuck to being a sportscaster on ESPN (hat tip to Michelle Malkin with video link to follow). In his “Worst Person in the World” segment, Olbermann chose Michelle Malkin for posting the names and phone numbers of UC Santa Cruz students that recently forced military recruiters off the campus.

As of this moment all we know for sure is that a state grand jury has issued sealed indictments against two Duke University lacrosse players in a case of ALLEGED rape. Are these two really guilty? That remains to be seen. But Jesse Jackson, appearing with Paula Zahn on CNN, has already set the racial fires burning with hot-button talk of “plantation” and “slavery” and “fantasies” of white men having their way with black women.

Columnist Robert Novak suggested in his weekend potpourri that Hillary Clinton is surprising supporters with some wild allegations. Have you heard anyone else in the national media on this outburst? 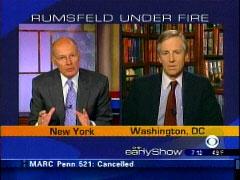 Defense Secretary Donald Rumsfeld has been under attack lately from those in the press, and with Congress out of session, and not much happening in the world of politics over the Easter weekend, the attacks continued this morning on CBS’s "The Early Show." And, once again, Harry Smith got confused by the facts (remember this and this).

By Greg Sheffield | April 17, 2006 2:25 PM EDT
This time it's official. The commentary Bob Schieffer will offer the "CBS Evening News" will not be sprinkled into various news stories. Instead, it will be a dedicated segment at the end of the show.

When Katie Couric takes over as anchor, CBS wants Schieffer to take on the new role.

NYT: Reaganism to Blame for "Growing Gap Between Rich and Poor" -- In Japan?

Of course, Japan's striated class system and government-controlled economy was for decades the main threat to mobility. But Onishi has another culprit in mind: Reaganism. 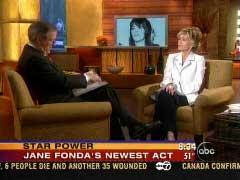 Good Morning America will use even the smallest excuse to give Jane Fonda a microphone. This morning Fonda was invited on the program to talk about the newly released paperback version of her autobiography, "My Life So Far".

'Commander in Chief' Comes Back with a Whimper

Hispanic News is calling for Latinos everywhere to help them get CNN's Lou Dobbs off the air. Lou Dobbs has seen an increase in ratings with his daily tirades against illegal immigration.

Lauer to Rumsfeld Supporter: "Did He Ask You to Be Here on His Behalf?" 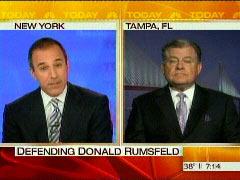 Darn it, when the MSM have a Republican in their sights, shouldn't he have the good grace to sit there and take it until he's hounded from office? That would appear to be NBC's operative principle, judging by Today's coverage of the Rumsfeld flap. Much of the emphasis this morning was not so much on the substance of the controversy but on the fact that the Pentagon is fighting back against the calls for Rumsfeld's ouster.

Jonathan Alter is having an utterly typical week in his "Conventional Wisdom Watch" box at Newsweek this week, labeled the "You're Doing a Heckuva Job, Rummy Edition." Once again, there is absolutely no separation between what the average MoveOn.org type thinks and what Alter writes:

Bush gets the typical down arrow: "Hearty Rummy endorsement shows he still puts loyalty before reality. And accountability? Ha!"