In theory, we're all pro-assimilation. And in theory, even the CEA agrees that Latino kids ought to be learning English. So naturally, the same education professionals who brought you "whole language" and the New Math oppose English immersion programs:

A proposal to immerse students who don't speak English into intense English-instruction classes for a year before they return to mainstream classrooms is not educationally sound and could be harmful to students, educators and critics say.

When President Bush has an accidental slip of the tongue, the establishment media makes it a front page headline, but when the chairman of the Democratic National Committee says something outrageous in prepared remarks, they all suddenly experience hysterical deafness.

Are you enjoying The Balance Sheet? Forward it along to your friends who will, too!

The Business & Media Institute wishes everyone a happy 4th of July. The Balance Sheet will be taking a holiday next week. See you on July 12!

Paper's Food section serves up left-wing group's latest complaints about what we drink.

Gates & Buffett: A Wealth of Information about How Journalists See Money

From The New York Daily News:

A few hours after a televised display of saccharine warmth and affection between Barbara Walters and Star Jones Reynolds - who yesterday surprised her "View" colleagues by announcing she's leaving in mid-July - their relationship turned very chilly indeed.

Never mind Walters' previous public assurances that Jones Reynolds was welcome to stay on the show as long as she wanted. Yesterday, "The View's" alpha female - the show's co-owner and co-executive producer - told me that she lied "to protect Star" from the damaging news that ABC long ago decided not to renew her contract.

Remember, a lie is never acceptable from a public figure.

UPDATE: The View transcripts (via Drudge)

"The network made this decision based on a variety of reasons which I won't go into now. But we were never going to say this. We wanted to protect [S]tar. And so we told her that she could say whatever she wanted about why she was leaving and that we would back her up."

Well I'll be, The View is a news program after all. If she did this to protect someone she dislikes, just think what she's done to protect the people she likes.

Republican House leaders want to introduce a resolution condemning the New York Times for its reporting on the international bank-monitoring program. On the Senate side, the chairman of the Senate Intelligence Committee, Sen. Pat Roberts, asked National Intelligence Director John Negroponte to assess the damage done by the leak.

Soldiers' Letters to the NY Times

By Greg Sheffield | June 28, 2006 11:16 AM EDT
The Boston Globe, owned by the New York Times, ran two letters from soldiers in Iraq addressed to the New York Times. The article also says that the American public trusts the military over the media: 47 percent say they have "hardly any" confidence in the media, while 14 percent say they have a "great deal" of confidence in the media.

Did The New York Times Expose a Financial Espionage Plan It Called For in 2001?

Time to put those coffee cups down again, sports fans, because Sweetness & Light has discovered an editorial humorously published by none other than The New York Times back on September 24, 2001, strongly advocating the Bush administration, as a result of the attacks just thirteen days prior, impose a variety of new procedures to track down and shut off the funding for terrorists (hat tip to Clarice Feldman at American Thinker).

“Organizing the hijacking of the planes that crashed into the World Trade Center and the Pentagon took significant sums of money. The cost of these plots suggests that putting Osama bin Laden and other international terrorists out of business will require more than diplomatic coalitions and military action. Washington and its allies must also disable the financial networks used by terrorists.”

Now that sounds like a great idea. The article wisely continued:

After Spy Story, the New York Times Defends Its Patriotism

After several discussions over the last few days from people who say "specifically, what law did the New York Times violate?" Here it is. The legal remedy for what the New York Times has done is the death penalty and confiscation of the newspaper.

(a) Whoever, with intent or reason to believe that it is to be used to the injury of the United States or to the advantage of a foreign nation, communicates, delivers, or transmits, or attempts to communicate… to any foreign government, or to any faction or party… whether recognized or unrecognized by the United States… any document, writing… plan… or information relating to the national defense, shall be punished by death or by imprisonment for any term of years or for life, except that the sentence of death shall not be imposed unless the jury or, if there is no jury, the court, further finds that the offense resulted in the identification by a foreign power… directly concerned… early warning systems, or other means of defense or retaliation against large-scale attack; war plans; communications intelligence…. or any other major weapons system or major element of defense strategy.
(b) Whoever, in time of war, with intent that the same shall be communicated to the enemy, collects, records, publishes, or communicates, or attempts to elicit any information with respect to… any other information relating to the public defense, which might be useful to the enemy, shall be punished by death or by imprisonment for any term of years or for life.
(c) If two or more persons conspire to violate this section, and one or more of such persons do any act to effect the object of the conspiracy, each of the parties to such conspiracy shall be subject to the punishment provided for the offense which is the object of such conspiracy.
(d)
(1) Any person convicted of a violation of this section shall forfeit to the United States irrespective of any provision of State law—
(A) any property constituting, or derived from, any proceeds the person obtained, directly or indirectly, as the result of such violation, and
(B) any of the person’s property used, or intended to be used, in any manner or part, to commit, or to facilitate the commission of, such violation.

Russert: Bush Beef with NY Times 'Going After Messenger' - But What's the Message? 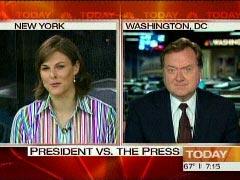 Sure, Tim Russert is a pillar of the great center-left media establishment. You can take the man out of Mario Cuomo's office, but you can't entirely take Mario's office out of the man. Even so, as MSM types go, Russert is among the more fair-and-balanced.

Fired For Failing to Be Fat: Feminist Hypocrisy at The View in Star Jones Exit 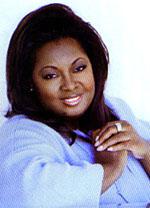 As a veteran Couric watcher, I've recently come to follow [without actually watching] doings at The View, since Katie's replacement Meredith Vieira was for years a member of the show's cast. For those unfamiliar with it, The View is an all-female televised coffee klatsch and gabfest of which Barbara Walters is the creator, partial owner and a co-host.

Inside the Post, Kurtz Laments 'Piling On' the Secret-Spoiling N.Y. Times

Howard Kurtz takes his online lamentations of criticism of the breathtaking arrogance of the New York Times into the paper today. The headline is "Piling On the New York Times With a Scoop." From there, you can see Problem Numero Uno. Kurtz, like other media people with blinders on, pretends that the Times is merely an honest broker of information that is "piled on," but can never "pile on" the White House or other conservative targets.

Do You Have A Bad-News Bias If Your Iraq Book Is Titled 'Fiasco'?

Washington Post defense reporter Thomas Ricks is one of several Post reporters with Iraq books hitting the market. But the title of his book, coming out in July, sticks out. It's Fiasco: The American Military Adventure in Iraq. I wonder if Post readers might not think in the day-to-day reporting on Iraq that Ricks is going to display a pronounced bad-news bias. The book description on Amazon suggests "caustic" is a word that fits this book's tone: