Chuck Todd's Perpetual Hype Machine: 'What If the President IS the Crisis?'

Meet the Press host Chuck Todd has proclaimed he thinks NBC and MSNBC are a very "fact-based environment," unlike Fox News. But his opening to his show on Sunday sounded like a dramatic editorial, underlining all of Trump’s problems with Republican leaders and conservative radio and TV hosts, throwing together the shutdown, the resignation of the defense secretary, and the stock market decline into one grand opinionated summary:

CHUCK TODD: Many have noted, that despite Mr. Trump’s many self-inflicted wounds, his presidency has benefited from not having to face a financial or international crisis. But perhaps now we need to face this uncomfortable question: What if the president is the crisis?

Which not-so-subtly implies that you can only end the crisis by ending the presidency. Is this what Todd submit as fact, and not opinion? It was a pretty aggressive introduction to pounding on Republican Sen. Pat Toomey, with queries like "Would you have this much patience for President Trump if you didn't share the same party label?"

The dramatic difference in aggression in tone between Republicans and Democrats was demonstrated when Democratic presidential hopeful Julian Castro came on, and Todd opened with this Trump-bashing softball:

TODD: Let me just start with something that Senator Durbin said at the end of our interview today. I asked him if he thought the president was fit for office. And he said he thought that the country could make it through another two years. What is your view on that?

JULIÁN CASTRO: Well, I can tell you one thing. He's not behaving like he's fit for office. He's behaving extremely erratically.

Can you imagine anyone at NBC starting an interview with a GOP presidential hopeful in 2011 with a question resembling: "So can the country survive much longer under Obama?" And if a conservative interviewer asked it, how fact would NBC denounce the question as hate-filled and racist?

Obviously, there is a difference in tone and temperament. Trump loves driving the media into a frenzy, running around claiming "Democracy dies in darkness" every morning. But you can't say Chuck Todd is engaging in facts more than opinions on his program.

A stubborn attention to facts would show that the stock market rose dramatically under Trump in 2017, if not in 2018. It's a fact that ISIS was crushed under Trump and Mattis. But these facts were downplayed, even ignored until the "news" could look much more negative, the way the liberal media prefers it. Even backing down on Syria is not exactly a "crisis" -- after all, Barack Obama abandoned in his red line. But look at how energetically spun those facts on Sunday:

HUGH HEWITT: This is, for President Trump, what the red-line controversy was for President Obama, except when President Obama erased the red line, no one resigned. There wasn't a crisis. Here, there's a crisis because somebody resigned over the policy.

CHUCK TODD: Red line or, like, ten times bigger than that?

Is NBC engaging in news, or just in exaggerations?

After the show, Todd kept editorializing, turning to his Twitter account to insult conservative media critics for engaging in “lazy” deflection: 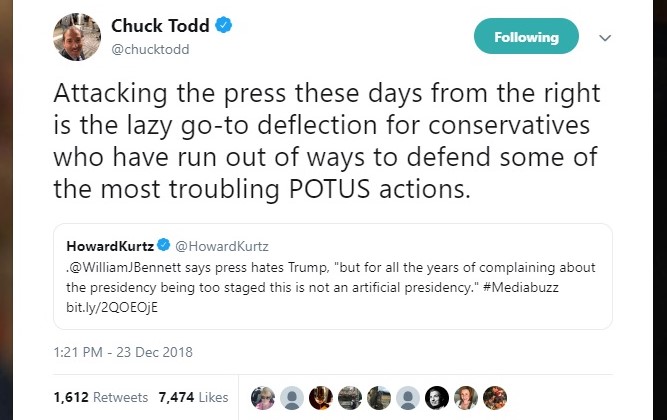 What's lazy around here is all the lazy liberal assumptions that journalists share with each other, and then deflect that by slamming anyone who criticizes them as an unprincipled Trump flunky.

[Hat tip on the videos to Brent Baker]