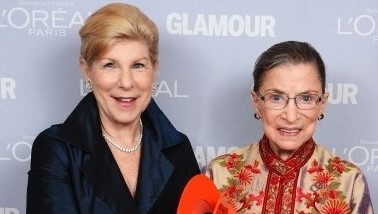 NPR Supreme Court reporter Nina Totenberg, best known in recent years as a buddy and cheerleader to "notorious" liberal Justice Ruth Bader Ginsburg, did not disappoint her liberal audience in freaking out over the new Supreme Court vacancy. Once again, every potential replacement for Anthony Kennedy promises a "hardcore conservative majority."

On All Things Considered on June 27, she broke out the warnings:

NINA TOTENBERG: And because the Supreme Court itself is now more divided than ever between Democratic and Republican appointees, a Trump-named successor is likely to tip the balance decidedly to the right, creating a hardcore conservative majority of a kind not seen probably in three-quarters of a century.

We're going to guess she's referring to the leftward shift under FDR, with liberal appointees like Felix Frankfurter and William Douglas. It continued:

TOTEBERG: So hold onto your hats; we're in for a hell of a ride.

AUDIE CORNISH: What could change forward when you think about concrete shifts?

TOTENBERG: Well, just for starters, Roe v. Wade might be reversed. Lots of federal regulations might be thrown out, might be a different, more -- less tolerant view of gun regulation and affirmative action. He was the fifth vote to uphold affirmative action in higher education. That could change, too - so as R.E.M. once put it, the end of the world as we know it.

Totenberg liked this spin so much, she repeated the next day on Morning Edition:

DAVID GREENE: So - huge moment. I mean, can you just put this in perspective for us?

TOTENBERG: Kennedy's retirement is the end of the world as we know it, at least at the Supreme Court. Just think, a few days ago, after the court punted on the question of extreme partisan gerrymandering, lawyers attacking that practice still thought they had a chance to come back next term and prevail. Well, I think that's probably out the window now. And many of the outcomes can be voted for, even championed, are now in doubt - the right to abortion, affirmative action in higher education, a moderate approach to gun rights, some limits on the president's power in waging the war on terror and, of course, gay rights.

On Thursday night's All Things Considered, Totenberg described the emerging Trump favorites with six uses of "conservative" to describe the potential nominees or their backers. Brett Kavanaugh was "eventually confirmed and, as I said, has had a distinguished record, very conservative record on the D.C. Circuit, but often doesn't go quite as far as some conservatives would like.":

As for Amy Coney Barrett, Totenberg replayed Sen. Dianne Feinstein worrying out loud that "the dogma lives loudly within you."

TOTENBERG: Now, that word dogma. Means you're unmovable. And it suggested to many that Judge Barrett would not be able to rule against her private desires, her private religious beliefs. And the word dogma -- the whole statement has become something of a joyous refrain among conservatives.

In a online article on Friday, Totenberg used sixteen references to conservatives or conservatism, such as this passage on Amy Barrett and Brett Kavanaugh: "In truth, both are very conservative legal believers who would undoubtedly push the Supreme Court far to the right of where it was during Kennedy's more centrist conservative time on the Supreme Court."