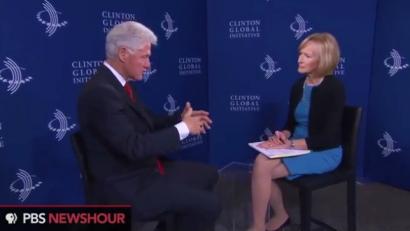 The defunding of the Corporation for Public Broadcasting is long past overdue. No president, including Ronald Reagan, seriously pushed an immediate winding down of this corrupt and outdated waste of taxpayer funds. Who would have ever imagined that Donald Trump would be the first to do this?

His first budget takes that step, not just to save of ton of taxpayer money ($450 million is a lot of money), but to establish a principle about our leftist media. It’s simply not appropriate for the federal government to fund Democratic propaganda badly disguised as “news.”

Is it any surprise, then, that the media have come unglued?

CNN anchor Martin Savidge suggested Sunday that this proposal sounds like “conservative revenge.” In September, we mark the 50th anniversary of the Public Broadcasting Act of 1967, which laughably proclaimed that the taxpayer-funded TV and radio stations of America would seek “strict adherence to objectivity and balance in all programs or series of programs of a controversial nature.”

There’s no way to measure precisely how many billions of dollars or hundreds of thousands of hours of broadcast time conservatives would need to accomplish a tiny fraction of “revenge” for this long half-century march of leftist propaganda.

If it is “revenge” for conservatives to demand an end to this charade, then we are guilty as charged.

On CNN’s Reliable Sources, PBS president Paula Kerger was offered a platform to make ridiculous statements about how PBS is all about educating small children before kindergarten, and the public should pay no attention to all the liberal “educating” they undertake in prime time.

Kerger made preposterous arguments with no rebuttal. Try this one: "Our entire programming operating budget is less than Netflix spends on the production of The Crown.”

She is picking the most expensive television show ever made, with an estimated production budget of $130 million, but no matter. Now look at the last PBS financial statement for “Public Broadcasting Service and Subsidiaries.” Under “Expenses” for 2016,  programming was listed as $380.3 million, and in 2015, it was listed as $382.9 million.

So  Kerger is playing accounting games with the term “operating budget” or with the money sent to “subsidiaries.” But for the people who watch PBS stations and pay the bills -- involuntarily -- it’s a difference without a distinction. It’s also their typical obfuscation.

Over the years, there have been many wild leftist statements. PBS host Tavis Smiley insisted that Christian terrorists blow up people “every day” in America. In 1995, NPR’s Nina Totenberg wished for the “justice” that Sen. Jesse Helms or one of his grandchildren would die from AIDS.  PBS omnipresence Bill Moyers proclaimed that Republicans wearing U.S. flag pins after 9/11 reminded him of Chinese communists carrying Mao’s “Little Red Book.” Moyers also oozed over paintings glorifying the Marxist revolutionaries ruling Nicaragua. “The white dove of freedom soars with the Sandinista revolution, whose heroes included Jesus Christ, George Washington and the nationalist hero Augusto Sandino.”

Let the left-wing billionaires fund this left-wing propaganda. Conservatives are tired of funding our own (literal) demonizers.