The bizarre inaccuracy of reporting on transgender activists was demonstrated by a recent New York Times blog post (for their “Women of the World” project) headlined “Transgender man opens up about breastfeeding his sons.” He breast-feeds? 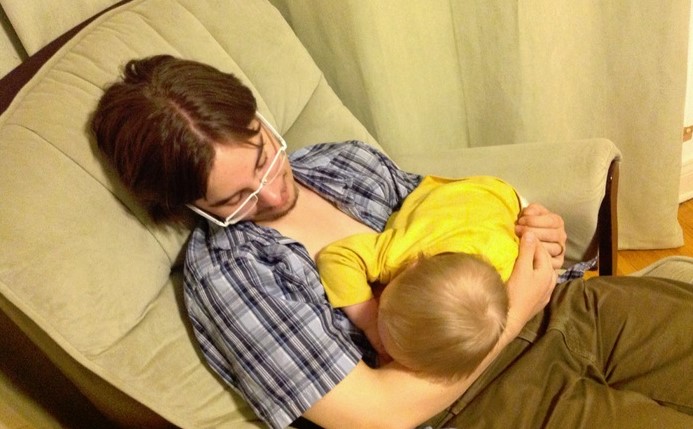 A transgender man living in rural Canada has published a memoir about his experiences transitioning from a woman in his twenties, and then later giving birth to two children. The book, authored by Trevor MacDonald, is titled Where’s the Mother: Stories of a Transgender Dad....

MacDonald, 31, told The Guardian he’s never viewed gender in the binary terms that society has defined, but even those who were accepting of his transition fell back on the idea that giving birth is a strictly feminine endeavor when he revealed he was pregnant.

“I was worried that breastfeeding might feel gendered to me — I thought, am I going to be able to do that, or am I going to experience a lot of gender dysphoria?” He’d undergone surgery to have his breasts removed, but his body still produced milk and he was able to breastfeed — or chestfeed, as he puts it — both of his children. He even started a blog called Milk Junkies and chronicled his experiences.

The Guardian’s original headline was:

Breastfeeding as a trans dad: ‘A baby doesn’t know what your pronouns are’

They added "MacDonald began working with a research team to design and produce a series of research papers, funded by the Canadian Institutes of Health Research, that aim to draw parallels among the experiences of pregnancy, birth and infant feeding of 22 transgender men from around the world."

While the diapers, bottles and sleepless nights of parenthood are universal – “a baby doesn’t know what your pronouns are,” he says – the study also seeks to highlight the additional barriers transgender parents often face in navigating healthcare systems unfamiliar with their needs.

MacDonald points to one night during his second pregnancy as an example.

Naturally, the troglodytes in the obstetrics unit forced “him” – the pregnant lady with the beard – to explain why he urgently needed to get in. “I had to come out to them as transgender and explain a lot of my backstory in the middle of a hallway alongside other people who were also trying to get past the security desk,” he says. “That didn’t feel particularly safe.”

It’s those kind of stories he hopes to bring into focus by sharing his own experiences and with his research project. As the push for transgender rights in the US stagnates in the grasp of a polarising debate on bathrooms – “it’s so sad; this is a population that is already incredibly vulnerable to suicide,” he says – he believes the the need to widen the parameters of the discussion elsewhere is vital.