Taranto: PolitiFact Changing Its 'True' Obamacare Claim to 'Lie of the Year' Exposes Their Fundamental Dishonesty

James Taranto of The Wall Street Journal took on the strange conflict that is PolitiFact picked a “Lie of the Year” they’ve repeatedly defended as “Half True.” Barack Obama repeatedly claimed that if you liked your health plan, you could keep it once he passed his badly named "Affordable Care Act." He called it "PolitiFact's Forked Tongue."

PolitiFact has only drawn a yellow Hi-Liter through what’s wrong with liberal media-elite “fact checking” patrols: It exploits their "objective" image as it declares a campaign promise as factual (or not) prematurely, before there’s any factual reality to judge. From the beginning of the “truth squad” tendency in the 1992 presidential campaign, we’ve found this disturbing tendency.

Back then, network reporters repeatedly described Bush campaign advertisements and debate claims as “misleading” and even “lying” for claiming Bill Clinton would raise taxes on the middle class if he was elected. That’s a prediction, not a fact. But after the vice presidential debate between Vice President Dan Quayle and Sen. Al Gore, the networks painted  Bush-Quayle as factually deficient, and not Clinton-Gore: 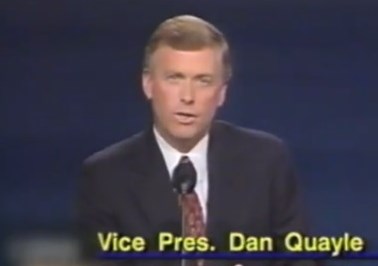 "There are some factual things to clean up. When Dan Quayle said they would be raising taxes on people down to about $36,000, that's based on Bush campaign projections of the Clinton economic program." -- NBC anchor Tom Brokaw after the vice presidential debate, October 13, 1992.

"The Bush campaign calculates that since Clinton could not possibly raise the money he needs to pay for his spending programs with his revenue proposals, he would have to impose a 36 percent tax rate on anyone making over $36,000 a year. Independent examination of this charge by, for example, press organizations, has found it, to say the least, misleading." -- ABC's Jeff Greenfield on Nightline, October 13, 1992.

"It was Quayle who repeatedly twisted and misstated the facts... Quayle misrepresented Clinton's economic plan, which calls for a net tax increase of only $46 billion spread over four years -- the $150 billion Quayle mentioned, minus the $104 billion in cuts he neglected to mention." -- CNN reporter Brooks Jackson, October 14, 1992 Inside Politics.

So Bill Clinton was elected with the usual media bias tilting the playing field. We noticed that shortly afterward, in the February 18, 1993 USA Today, the newspaper admitted "Looks like Dan Quayle was right. Last year's vice presidential debate...produced an accurate prediction from Quayle about the Clinton budget plan...The final plan, according to Clinton officials, will hit those making $30,000 and above."

Where did the Republicans go for apologies and retractions? There were none.

In the case of Obama and Obamacare, Taranto strongly implied that PolitiFact appeared to have all the independence of a "state propaganda agency" asserting that everything Obama said was true because Obama had proclaimed it:

For in the past--when it actually mattered, which is to say before ObamaCare became first a law and then a practical reality--PolitiFact vouched for Barack Obama's Big Lie.

In 2009 and again in 2012, PolitiFact rated Obama's statement Half True, which means the statement is partially correct and partially wrong. We noted that while the law took pains to leave some parts of the insurance market alone, people were not guaranteed to keep insurance through thick and thin. It was likely that some private insurers would continue to force people to switch plans, and that trend might even accelerate.

Her "half true" acknowledgment is itself a half-truth. As the Washington Examiner's Sean Higgins noted last month, in October 2008 PolitiFact rated the same statement, from then-candidate Obama, as flatly "true," on the ground that "Obama is accurately describing his health care plan here."

One might have reasonably suspected, in 2008 and certainly in 2009 and 2012, that Obama was lying. But one could not prove it, because it was not yet a factual assertion. In 2008 it was but a promise, which Obama might or might not have intended and might or might not have been able to keep. By 2012, we now know, it was a full-fledged fraud, but exposing it conclusively as such would have required a degree of expertise few journalists have.

In other words, it's not that PolitiFact was wrong to withhold its jejune "pants on fire" designation from the Obama statement in 2008, 2009 and 2012. It was wrong even to make a pretense of "fact checking" a statement that was, at the time, not a factual claim. Its past evaluations of the statement were not "fact checks" at all, merely opinion pieces endorsing ObamaCare.

In summation, PolitiFact was a dishonest player: “selling opinion pieces by labeling them ‘fact checks’ is fundamentally dishonest. In this case, it was in the service of the most massive consumer fraud in American history.”