As anti-terror techniques go, the one announced this week by the TSA - that of chatting with airline passengers to see if they exhibit tell-tale signs of nervousness - seems relatively unlikely to result in racial or ethnic profiling, since it focuses on behavior rather than superficial characteristics.

Happily, NewsBusters wasn't the only conservative outlet to pick up on the Christmas Day "Meet the Press" with Tom Brokaw and Ted Koppel. The spectacle spurred columns by David Limbaugh and Jonah Goldberg. Limbaugh summarized:

Did you know that a brave Navy Chaplain by the name of Gordon Klingenschmitt has been on a fast since December 20th?  Probably not because the coverage in the mainstream media has been very limited, if not at all.   An examination of the websites of ABC News, CBS News, and NBC News all come up with nothing.  Cable news has also barely covered this story.  Fox News has one short story, MSNBC’s Tucker Carlson had Klingenschmitt on as a guest, while CNN has completely ignored th

On MSNBC's Countdown show Tuesday night, Keith Olbermann devoted the first segment of his show to more discussion about President Bush's impeachability over the NSA wiretapping controversy. On the December 20 show, as detailed in an earlier Newsbusters posting, substitute host Alison Stewart discussed the issue with Democratic Senator Barbara Boxer without any conservative guest to provide balance. Similarly, this time Olbermann interviewed, without rebuttal from any Bush supporter, former Nixon White House Counsel John Dean, a longtime critic of the Bush administration, who notably helped inspire Boxer's inquiries into impeachment by proclaiming to her that Bush was "the first President to admit to an impeachable offense."

Next on Access Hollywoo -- I Mean Today -- It's Carville Time 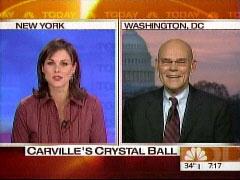 James Carville appeared, all alone, on the December 28th edition of the Today. Let’s count the number of things wrong with the piece, airing at 7:15AM: During the interview, Campbell Brown questioned Carville uncritically, never challenged his assertions, and, worst of all, allowed the man to pimp his new film. Brown opened the piece this way:

CNN’s promotion of Cindy Sheehan's anti-war crusade continued on today’s American Morning. During the show’s Top Five in ‘05 segment, anchor Carol Costello profiled ‘The Peace Mom’ who "forced the nation and President Bush to take a long, hard look at the war," as number three in their countdown. And while a billion Catholics worldwide may disagree, CNN actually ranked Sheehan’s "national movement" and "worldwide spectacle" higher than the legacy of one of the most influential religious leaders of our time, Pope John Paul II, number four on American Morning’s list.

During the mostly fluff piece on Sheehan and her "fight," one line was particularly laughable. Costello asserted, "Love Cindy Sheehan or loathe her, the one thing that was almost impossible to do in 2005 was to ignore her." CNN helped make that possible, thanks to their constant coverage of Sheehan's every move from Crawford to D.C. to her most recent trip to Britain, as reported by Newsbusters.

A full transcript from the 9:45 am segment follows below.

No Coca-Cola Ads on The School Bus? Or Are Higher Taxes Really the Answer?

I know this is the week between Christmas and New Years, but did CBS really need to dig up 12 year old news to fill time this morning? The subject was commercial advertising on public school buses in Colorado Springs, an outrage pretty much contained to liberals who hate commercials and lower school taxes.

Check out the promotional ad for this Thursday evening's (December 29, 2005) episode of ABC's Primetime. The promo is for the story, "On the Trail of Pope Joan" (audiotape on file; emphasis mine):

"Diane Sawyer takes you on the trail of a passionate mystery. Just as intriguing as The Da Vinci Code. Chasing down centuries-old clues hidden even inside the Vatican. Could a woman disguised as a man have been Pope? Thursday night. One astonishing Primetime."

It doesn't get much uglier than this, folks. Quite simply, there was never a female pope, or "Pope Joan." The tale is a complete fabrication dating back to the 13th century - nearly 400 years after the reported "reign" of the so-called "Joan." For reliable summaries of the bogus tale, see this and this. Scholars debunked the fable hundreds of years ago, and recent books (this and this, for example) have further repudiated it.

Over the centuries, the "Pope Joan" story has been used as a slanderous tool to tarnish the Catholic Church and degrade Catholics. In his acclaimed 2003 book The New Anti-Catholicism, Philip Jenkins writes, "The Pope Joan legend is a venerable staple of the anti-Catholic mythology" (page 89).

[This article was reprinted at length and with favor in "Inside Politics" in the Washington Times today (Thursday).]

A poll by Rasmussen Reports today (Wednesday) illustrates the pervasive dishonesty of the American press in dealing with the NY Times story about the National Security Agency’s (NSA) intercepts of international communications. There are both minor dishonesties and major ones in this story as first reported by the Times and later a gaggle of reports throughout the media.

Are You "Mainstream" Media If You Loved the Gay-Cowboy Flick?

New York Times writer John Leland reviews the growing phenomenon of Christian film criticism -- and how it now both evaluates the artistic and moral content. While it's nice to see the Times notice and even publicize conservative cultural efforts, Leland still employs the notion that the permissive liberal critics represent the "mainstream" of the media. As a follow-up to today's NewsBusters posting on MSNBC's Keith Olbermann, who on his December 27 Countdown show made a comparison between the radio show of conservative host Janet Parshall and an "Al-Qaeda Show on Al-Jazeera talking about infidels," a further example of Olbermann's hostility to religion occurred on his November 23 show. On his Countdown show on Wednesday November 23, the MSNBC host attacked proponents of intelligent design theory, which he labeled as "nonsense," and compared its supporters to those who believed t 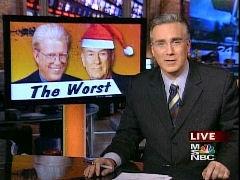 On Tuesday night's Countdown show, MSNBC's Keith Olbermann launched his latest attacks on FNC's Bill O'Reilly and John Gibson, at one point saying O'Reilly is "one of those blissful idiots who can rationalize anything." Olbermann also indirectly called Gibson "functionally stupid" by contrasting him with O'Reilly, saying that O'Reilly "is not so functionally stupid as to deny things that are preserved on tape, which is what Mr.