John Murtha's Foot in His Mouth on Iraq, Again

Tonight, Democrat Congressman John Murtha stuck his foot in his mouth, again, in an interview on John Kasich's program, "Heartland," on Fox News. As part of his argument that American troops should be withdrawn, starting now, he said,

Source: No transcript is yet available, but this was TiVo'ed and the quote is accurate.

NPR’s Nina Totenberg declared on this weekend’s Inside Washington that the House vote to extend the current tax rates on dividends and capital gains was “immoral” as she ridiculously claimed, in the face of ever-soaring entitlement spending, that Congress is cutting aid to the poor. Newsweek’s Evan Thomas backed her up, asserting that “we need to raise taxes...and who better to raise them on than the super-rich?" Totenberg argued of the tax rate extension vote: “I just think it's immoral to do that, not to mention fiscally irresponsible, when you're cutting people who have nothing -- from children off of Medicaid and mothers who depend on childcare losing the childcare and can't work. And then what do they do? Go back on welfare? I mean, it is, it's, I just think it's immoral." Columnist Charles Krauthammer tried to insert some rationality into the tax hike advocacy of Totenberg, Thomas and columnist Mark Shields, as he pointed ot that if the House position does not prevail and "you abolish" the current rate "you are essentially raising" taxes when that current rate expires in two years. (Transcript follows.)

Lawrence O’Donnell Suggests Bush Should Learn From “The West Wing”

At the Huffington Post yesterday, MSNBC’s Lawrence O’Donnell stated that President Bush, who is rumored to watch reruns of the television program O’Donnell is the executive producer for, should be watching recent episodes of NBC's “The West Wing” to learn how to deal with problems in his own

Matthews Wants "Test Votes" On Iraq, Forgets There Was One Last Month

Recently, Hardball with Chris Matthews has done a nightly segment called "Ending the War". The segment usually features one Republican and one left-wing Democrat to discuss how the war is going, the intelligence leading up to the War, and how the US can get out. On Thursday night's Hardball, Matthews said the following:

MATTHEWS: Did you—when you look back on the Vietnam War, if you remember—they used to have votes all the time in the U.S. Senate and the U.S.

A front page New York Times story on the global warming talks in Montreal chose to place all the blame for America’s refusal to move forward with the highly controversial Kyoto Protocol on the Bush administration. In doing so, the Times didn’t inform its readers about the history of this accord, and, in particular, that the Senate in July 1997 voted 95-0 against it.

Fox's Phillips: No DNA, No Tookie Execution, Since 'A Number' of Innocents Were Executed

No DNA evidence, no execution of Tookie Williams. That's the standard Fox & Friends Weekend host Julian Phillips established this morning. As he put it:

"The issue for me is, is he guilty or is he not? He still maintains his innocence. If they can prove through DNA and other stuff, fine."

To bolster his case, Phillips asserted:

E! Online (via Yahoo) reports that the upcoming second season of ABC's "Dancing With the Stars" will feature "original 'Access Hollywood' host" Giselle Fernandez, better known inside the MRC as a former CBS News and NBC News reporter. (She's not the only journalist tapping toes: ESPN anchor Kenny Mayne is also in the cast.) The story features the TV writer's academic omnipresence, professor of pop culture Robert J. 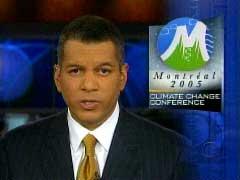 Is President Bush Acting Like A Clumsy Christian In Public?

Terry Mattingly at the Get Religion blog is on my wavelength on the Bush's-clumsy-over-Christmas issue (as opposed to my pal Kathryn Lopez, who suggests I shouldn't be spouting silly Bush wimp nonsense.) He says Bush's joke the other day cheekily replacing Jesus with Santa as our Christmas savior is "a sign of how tone deaf the whole Bush clan is about the cultural style and lingo of evangelical Christianity.

UK Journalists Sell Themselves on eBay

Watching a TV talking head or reading a article, sometimes one wonders at how much a journalist is willing to sell him/herself. Apparently in the UK, the price is about $59.

That may seem an unusual thing to say but this eBay auction for a "used" editorial staff of a southwestern English newspaper is hardly something you see every day.

Apparently, the staff of the Western Daily Press is about to be the subject of a downsizing as its parent company prepares to sell the paper and several others. To get around this, the Press's editorial staff is offering interested buyers the "the right to employ every redundant member of staff to produce the newspaper of your choice."

"This could be the start of your media empire," the listing reads, later offering a "FREE guarantee of dedication to our prospective new employer" with a promise that the staff is willing to work unpaid overtime hours.

An excerpt from the online ad:

Some Common Sense on the Midway Plane Crash

Syriana: Realism or a Left-Wing Assault on Oil?

By Dan Gainor | December 9, 2005 2:00 PM EST
Media go to the well to promote anti-American movie and warn against perils of capitalism.

The Associated Press/Ipsos released results of a new poll concerning the public’s opinion of political corruption. In its report about this survey, the AP categorized the public’s negative view as being almost exclusively a Republican problem.