Some of CNN host Reza Aslan’s other disgusting and hateful tweets are mysteriously disappearing. The cable network star drew controversy when he called Donald Trump a “piece of shit” last weekend. He lamely “apologized” and declared, “That’s not like me.” Except, of course, it is.

Yet, some of Aslan’s old hateful tweets are no longer on his page. On August 21, 2012, he tweeted, “Just to be clear I was indeed wishing someone would rape congressman Todd Akin. I'd hate to be misunderstood.” That tweet is gone. Here's a screen shot: 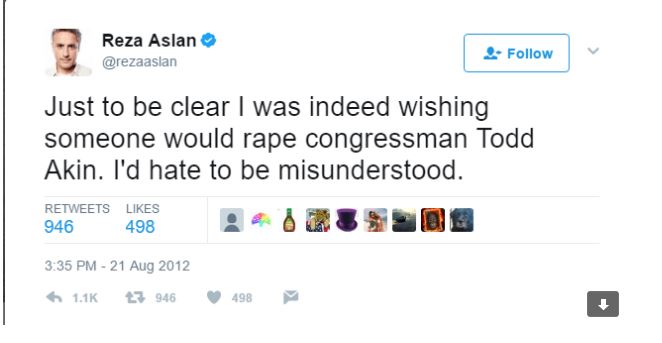 On September 19, 2016, in reference to a tweet by Donald Trump Jr. About the campaign, Aslan snarled, “Like piece of shit father, like piece of shit son.” That tweet is also missing. Here's a screen shot: 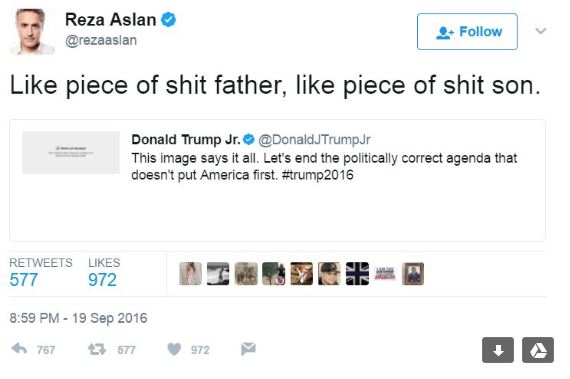 It’s also interesting to note that the CNN host has mostly gone silent on Twitter. Since Monday, he’s only tweeted once and that was a retweet.

After Greg Gianforte won a House seat after assaulting a liberal reporter, Aslan mocked Vice President Mike Pence:  "And Jesus said, 'if someone tries to ask you a question, beat the s--t out of them.'"

He responded to a Happy Mother’s Day tweet by House Speaker Paul Ryan by screeching: "Except of course Syrian moms fleeing war, famine, and genocide with their starving children. F--k those moms."