After a big promotional push by ABC and NBC, Democratic House candidate Clay Aiken leads his primary opponent by 372 votes out of 28,000 cast on Tuesday. According to Good Morning America on Wednesday, the "American Idol congressional candidate" may pull out a razor thin victory.  Co-host Lara Spencer enthused, "Clay Aiken in the public eye for almost a decade,  making headlines for his songs, his personal life and now a run at the United States Congress." [MP3 audio here.]

Spencer stated the obvious, noting, "He was considered by many the underdog. [Primary opponent Keith] Crisco outspent him by nearly a half million dollars." However, the liberal candidate has had a lot of help from journalists. On February 6, Mara Schiavocampo enthused, "Well, simply put, he is a long shot but that hasn't stopped Aiken from throwing his hat in the ring."

On May 2, Kelly O'Donnell on NBC's Today touted, "Clay Aiken is campaigning for a big career change. From pop singer to politician." 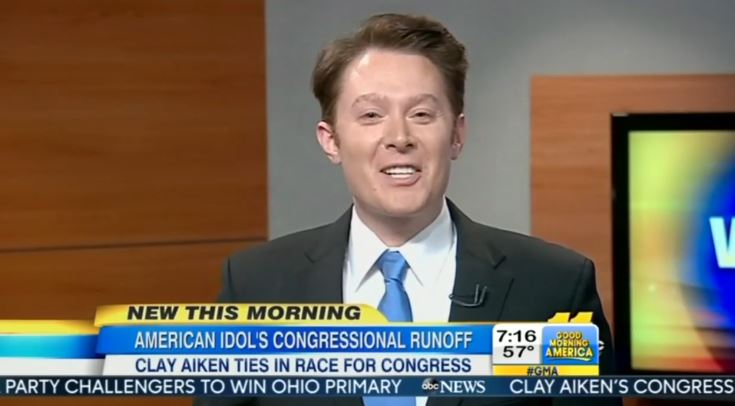 There were several other primary races around the country and in North Carolina. Yet, ABC and NBC both skipped the Republican primary for the U.S. Senate there. Only CBS This Morning covered the victory by Thom Tillis, giving the Senate race 19 seconds.

A transcript of the May 7 segment is below: 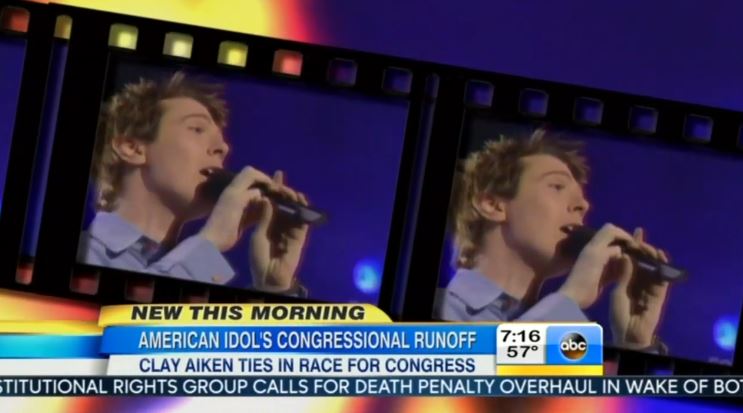 LARA SPENCER: Clay Aiken in the public eye for almost a decade,  making headlines for his songs, his personal life and now a run at the United States Congress. He was a memorable runner-up once before. [Clip of Aiken singing.] But now, eight years after placing second on American Idol, Clay Aiken finds himself in a neck and neck fight to the finish, once again.

SPENCER: Overnight, the 35-year-old who is running for a congressional seat in his home state of North Carolina, locked in a too-close-to-call Democratic primary battle. Receiving just 372 more votes than his opponent, Keith Crisco, a textile entrepreneur. ABC News spoke with Aiken at the polls before the numbers came in.

CLAY AIKEN: I'm used to putting myself in situation where's it relies on the public vote in some way.

SPENCER: He was considered by many the underdog. Crisco outspent him by nearly a half million dollars.

RICK KLEIN: It means you've got national name recognition, a fund-raising base, excitement generated around your candidacy.

SPENCER: But even if he does pull off this primary nail-biter, he still has a tough battle ahead, facing Republican Congresswoman Renee Elmers in November. The favorite in the conservative district. So, it's gonna be tough.

STEPHANOPOULOS: It is. It's going to be tough. But for him to get this far is really something. First time out. Now, he has to go through a recount and get into a general election. He still has a way to go.

ROBIN ROBERTS: It's very surprising that he got this far.