CBS This Morning journalist Barry Petersen on Monday offered a puff piece on legalized pot in Colorado, displaying no skepticism about health effects. Instead, he happily explained that "more than 60,000 gathered to party for 4/20. In marijuana lore, the day in April to celebrate all things pot." Petersen noted that the convention includes "an actual trophy for the best pot." [See video below. MP3 audio here.]

He informed viewers that the award went to "a Denver-grown variety called Ghost Train Haze." The entire story contained zero mention of any downside to increased pot use, despite the just-released study concluding that even casual marijuana use may damage your brain.

Though Petersen included numerous clips of people at the pot gathering, including actor Tommy Chong and a representative of High Times magazine, he excluded anyone opposing legalization. The reporter cheered:

BARRY PETERSEN: Marijuana advocates are encouraged that an event like this could be held in America's heartland. To them, it's proof that the times – and America's attitudes about marijuana – really are a changing. 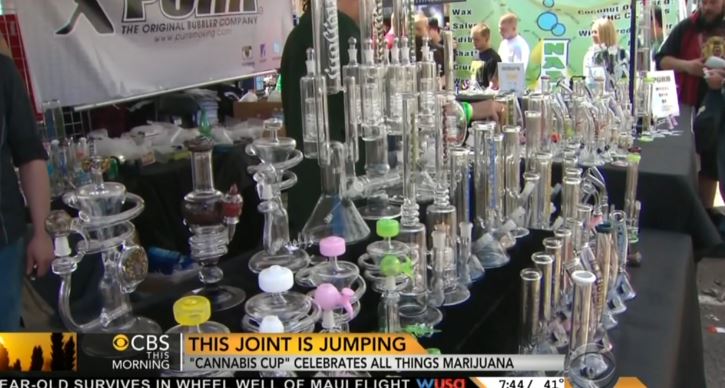 In January, the CBS journalist touted "cannabis capitalism" and "pot tours" that cure the "marijuana munchies."

In February, Petersen came around to the downside of legalized pot. He featured a doctor who said of the newly legalized drug: "We have found molds, mildew, e-coli...What you can die from is contaminated cannabis."

Such a perspective was missing from the upbeat tone of Monday's story.

CHARLIE ROSE [Bob Marley's "One Love" plays under Rose's introduction.] Colorado's recreational marijuana law is bringing in millions in tax revenue. Today, a state budget committee is expected to approve a plan for what to do with the money. A final decision still faces a long fight, but as Barry Petersen shoes us, pot users were in more of a festive more festive mood on Sunday. 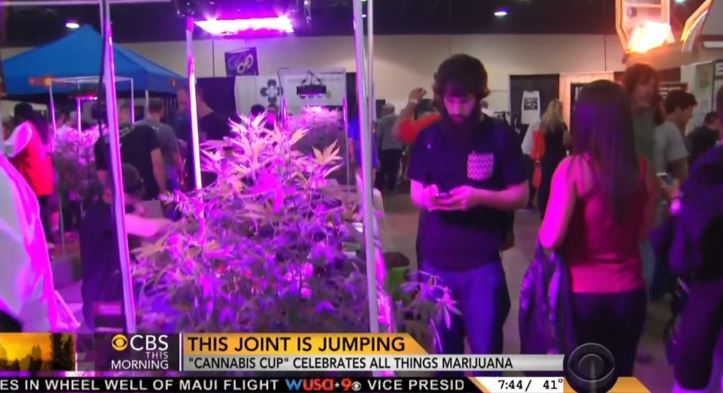 BARRY PETERSEN: In downtown Denver more than 60,000 gathered to party for 4/20. In marijuana lore, the day in April to celebrate all things pot. Across town, the more money-minded came early and from all across America for the Cannabis Cup.

MUHAMMAD NEZRADEN [PH]: Cannabis Cup is great way to really show a huge crowd of people what a small company like us can do.

PETERSEN: And amidst the haze of smoke in these new times, a blast from the past. Tommy Chong.

TOMMY CHONG: It's like being on a movie set.

[Clip from Cheech and Chong's Next Movie.]

PETERSEN: And it was in the movies that Cheech and Chong used humor to introduce marijuana to mainstream America almost 40 years ago.

CHONG: It's almost like we're doing a movie called What If Pot Was Legal in America?

PETERSEN: High Times, a pro-marijuana magazine started the Cannabis Cup in 1988 in Amsterdam, one of the only places in the world where cannabis consumption was tolerated. It's since been staged in the U.S. including Denver with 37,000 people this year, twice what it was in year is past. The big boost, because of legal, recreational pot sales.

SARAH MOHRAT [PH]: It doesn't hurt if your state and local governments are benefitting from all the tax dollars that are coming your way through cannabis events just like the Cannabis Cup.

PETERSEN: And sales taxes will mean an estimated $54 million for the state of Colorado and millions more for those cities that allow pot sales, like Denver, where there are now more pot shops than there are Starbucks. At the end, they awarded an actual trophy for the best pot in the United States, a Denver-grown variety called Ghost Train Haze. Call it, the World Cup of cannabis.

CHRISTIAN HAGESETH: Oh, my God! It's a high honor to grow the best weed in the entire nation.

PETERSEN: Marijuana advocates are encouraged that an event like this could be held in America's heartland. To them, it's proof that the times – and America's attitudes about marijuana – really are a changing. For CBS This Morning, Barry Petersen, Denver.

GAYLE KING: They are in a good mood in Colorado.

KING: I think Tommy Chong saying, "Finally people coming around to my way of thinking! I tried to tell you people this years ago!"

ROSE: And the Cannabis Cup for the man who grows the best marijuana.

KING: There you go!