One way to know if a journalist is asking a softball question is when the President of the United States compliments the reporter after he or she asks it. That happened twice on Tuesday as Barack Obama talked to reporters about the government shutdown. The President called on Sam Stein of the liberal Huffington Post website. Stein dutifully wondered, "With Speaker Boehner so far unwilling to hold a vote on a clean CR, what assurances can you give to those affected by a shutdown who are concerned about an even longer impasse?"

He added, "And how worried are you personally that your preferred solution to this -- a clear CR at sequestration levels -- may do harm to the nation's economy and your second term agenda?" Finding the question appropriately fawning, Obama responded, "Sam, you're making an important point." The President looked favorably on a similar query from a New York Times journalist. [See video below. MP3 audio here.]

Reporter Mark Landler even provided examples of how the shutdown has already caused damage:

MARK LANDLER (New York Times): This week, the President of China has visited several of the Asian countries that you were going to visit, and now had to skip because of the shutdown. He's also taken a big role at the two regional summits, both of which your administration has made a pretty big priority of, as part of the broader Asian pivot. Does China benefit from the chaos in Washington? And then more broadly, you've said in general that this hurts the reputation of the United States overseas.

Are there specific things that you can point to where you already have seen some damage? And one that occurs to me is the trade deal that you've tried to do in Asia. The leaders today announced that they still want to wrap it up, but they no longer are able to say they want to wrap it up by the end of this year. Had you been there, do you think you could have gotten that additional push? 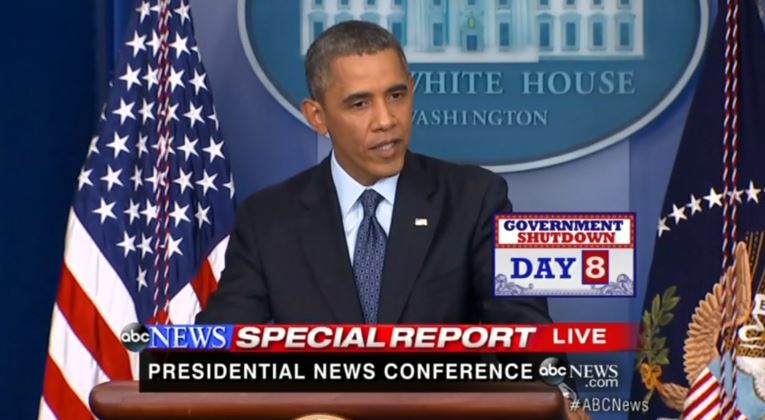 A pleased Obama quipped, "I think that's a great example." Rather than press the President on responsibility, Roberta Rampton from Reuters only "wondered" what the administration is telling other countries:

ROBERTA RAMPTON (Reuters): I'm wondering what you and your administration are telling worried foreign creditors, China and Japan, who are calling and then asking about whether the United States is going to avoid defaulting on its debts?

Ari Shapiro of the liberal NPR swerved away from the shutdown and offered Obama an opportunity to attack the Supreme Court on campaign finance law:

ARI SHAPIRO: Thank you, Mr. President. You mentioned the Supreme Court, and the term started today with a campaign finance case that sort of picks up where Citizens United left off. You called Citizens United devastating to the public interest, so I wonder if you could weigh in on this latest case. 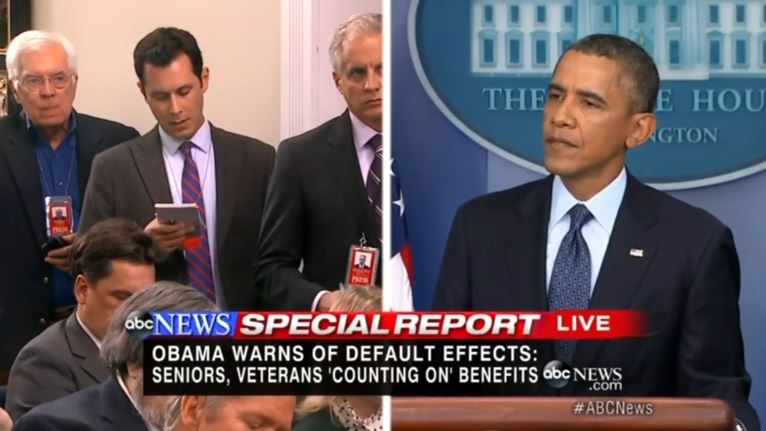 Edging ever so slightly towards challenging the President, Alexis Simendinger of Real Clear Politics , quizzed, "Looking back at the 2011 default discussions and the budget drama, is there anything that you wish that you had done differently in 2011?"

She added, "And after this -- what you call this nonsense has ended, what do you expect the political dynamics might -- how will they have changed to move forward?"

A transcript of the October 8, 2013 news conference can be found here.