In the fictional world of HBO's Newsroom, the Aaron Sorkin program about the lives of cable TV journalists, the idea of a liberal media bias is something to be scoffed at. On Sunday's episode, the show's new Republican strategist, dared to raise the problem to "Will McAvoy" (played by Jeff Daniels): "The liberal media bias is so clear that it's not worth arguing about."

McAvoy huffed, "I don't think I can let you float an allegation like that and then pretend it's so well agreed upon that it's past debate." Citing a real-life study, "Taylor Warren" (played by Constance Zimmer) insisted, "The media overwhelmingly voted for and is voting for Obama." Later, "Elliott Hirsch" scoffed at "your 15-year-old survey." [See video below. MP3 audio here.] Of course, it's not just one survey that found journalists are mostly liberal Democrats. Poll after poll has confirmed this fact.

In 2008, 55 of the 57 staffers who responded to the survey (96%) said they were supporting Barack Obama, with just one supporting Republican John McCain and one backing Libertarian candidate Bob Barr. 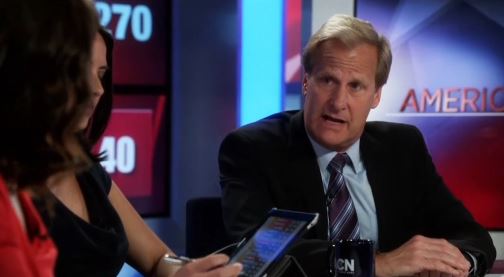 New York Times columnist John Tierney surveyed 153 campaign journalists at a press party at the 2004 Democratic National Convention in Boston, and found a huge preference for Democratic Senator John Kerry over incumbent Republican President George W. Bush, particular among journalists based in Washington, D.C. He found that journalists from outside Washington preferred Kerry by a three-to-one margin, while those who work inside the Beltway favored Kerry’s election by a 12-to-1 ratio.

For a TV writer as liberal as Sorkin to even raise the issue of liberal media bias is impressive. The show's token conservative even mocked Daniels's RINO-esque character, declaring that the fictional network's "star anchor is a Republican who spends an awful lot of airtime reporting stories about crazy Republicans being crazy."

Back on August 26, 2012, "McAvoy" denounced the Tea Party as the American Taliban.

A transcript of the September 8 exchange:

"TAYLOR WARREN" (Constance Zimmer): The liberal media bias is so clear that it's not worth arguing about. What I'd like to focus on instead--

"WILL MCAVOY" (JEFF DANIELS): Hang on just a second 'cause I don't think I can let you float an allegation like that and then pretend it's so well agreed upon that it's past debate.

WARREN: The media overwhelmingly voted for and is voting for Obama.

MCAVOY: I have a hunch this isn't gonna be the last time I ask you this tonight, but any evidence for that?

WARREN: Yes. A survey conducted by the American Society of Newspaper Editors showed 61% stated that they were members of or shared the beliefs of the Democratic Party while 15% said that their beliefs were best supported by the Republican Party.

"ELLIOTT HIRSCH" (David Harbour): So, Taylor, back to your point and your 15-year-old survey. -