ABC on Tuesday dropped any pretense of objectivity and defended the President over his "you didn't build that" attack on business. In an online article, ABCNews.com writers Amy Walter, Elizabeth Hartfield and Chris Good dropped this spin into a supposedly straight news report: "Republicans have seized on the line 'you didn't build that' to falsely claim that Obama was speaking directly to business owners about their businesses."

The ABC writers whined that the Mitt Romney campaign and the Republican National Committee have "been relentless in pushing" the attack." Walter, Hartfield and Good then cheered, "The Obama campaign, it seems, is not going to take it anymore."

Walter, Hartfield and Good went on to compare the situation to the 2004 "Swift Boat" attack.

Here's what the President said on July 13: 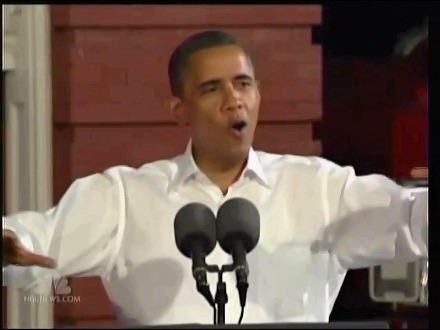 If you were successful, somebody along the line gave you some help. There was a great teacher somewhere in your life. Somebody helped to create this unbelievable American system that we have that allowed you to thrive. Somebody invested in roads and bridges. If you’ve got a business — you didn’t build that. Somebody else made that happen.

ABC, clearly sensing that the "you didn't build it" line was bad for Obama, ignored the comment for five days before reporting on it.

In contrast, ABC played up Mitt Romney's "I like to fire people" remark back in January, highlighting hecklers who mocked, "Will you fire the baby?'