TV News Touts Trump Controversies, But Avoids His Past Liberalism 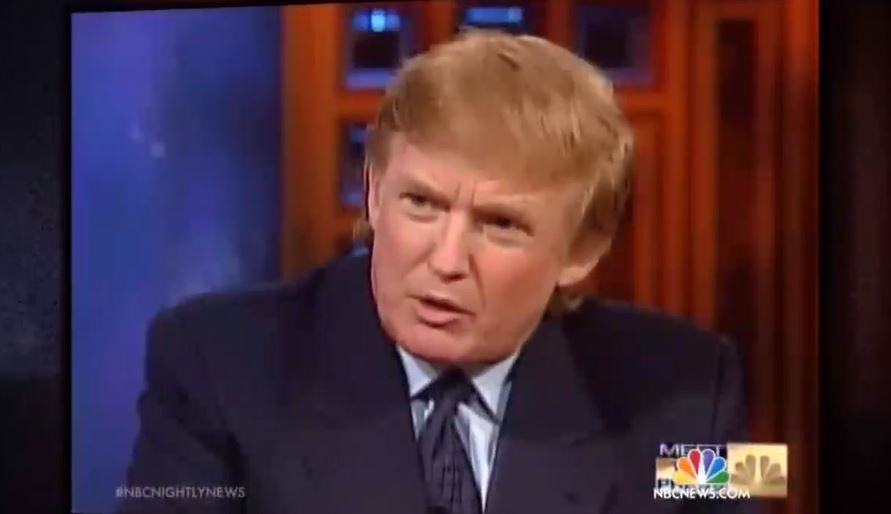 Whether he wins or loses Monday’s precinct caucuses in Iowa, political newcomer Donald Trump has clearly dominated both the GOP presidential campaign and TV news coverage ever since he entered the race back in June.

Yet while the big broadcast networks have devoted a tremendous amount of airtime to controversies involving the GOP frontrunner, they’ve spent surprisingly little time on one aspect of Trump’s biography that would seem especially important to voters in a conservative primary: the businessman’s past record of support for liberal positions and liberal politicians.

As of Friday, Trump’s seven-month-old candidacy has been the focus of an incredible 684 minutes of coverage on the ABC, CBS and NBC evening newscasts, far more than any of his GOP rivals — more than four times as much as the next-most-covered candidate, former Florida Governor Jeb Bush (151 minutes), and more than five times as much as Texas Senator Ted Cruz (122 minutes), currently Trump’s leading rival in the polls.

But amid that sea of Trump news, the networks have spent only about nine minutes (1.3% of Trump’s overall coverage) discussing the candidate’s clearly documented past support for liberal policy positions (i.e., pro-abortion, single-payer health care) and his praise of leading Democrats, including Democratic frontrunner Hillary Clinton.

MRC’s analysis of network evening news coverage finds Trump’s past liberalism fails to crack the Top 10 in terms of airtime, ranking #11 on the list of most-covered controversies. Instead, the networks emphasized Trump’s proposal to temporarily ban all Muslim entry to the U.S. (55 minutes), his statement that Mexico is sending “rapists” to the U.S. (42 minutes), and his remark that Vietnam P.O.W. John McCain wasn’t a “real hero” because he “got captured” (29 minutes). 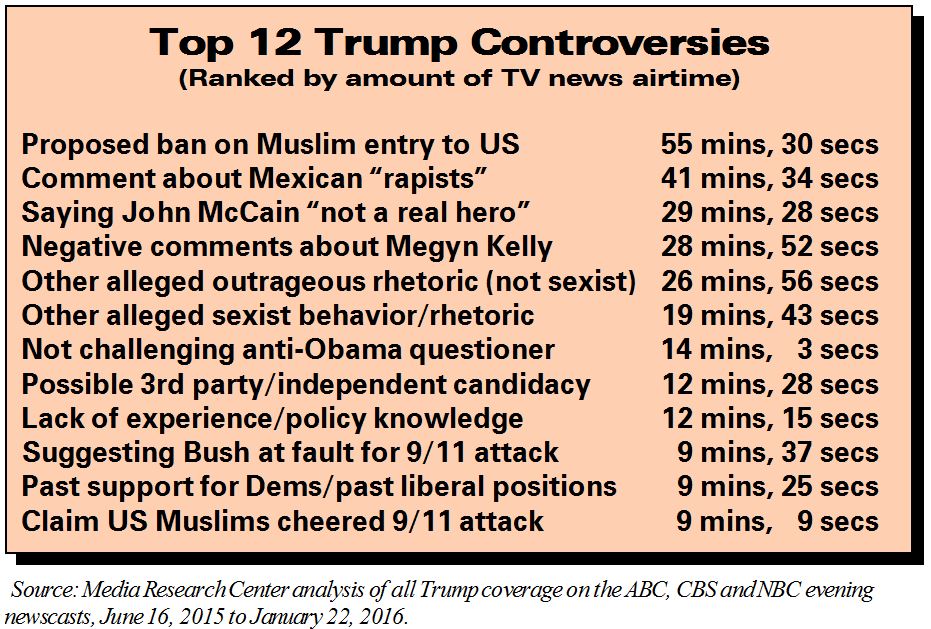 It’s not as if journalists were unaware of Trump’s liberal record. Back in July, NBC’s Chuck Todd briefly acknowledged the dissonance between the candidate’s past and present political utterances. Talking with Nightly News anchor Lester Holt on July 8, Todd found it remarkable Trump would denounce Hillary Clinton since “at one time he praised her job as Secretary of State, and he’s been a big supporter of the Clintons in the past.” Todd predicted: “I think that’s going to get him in trouble.” 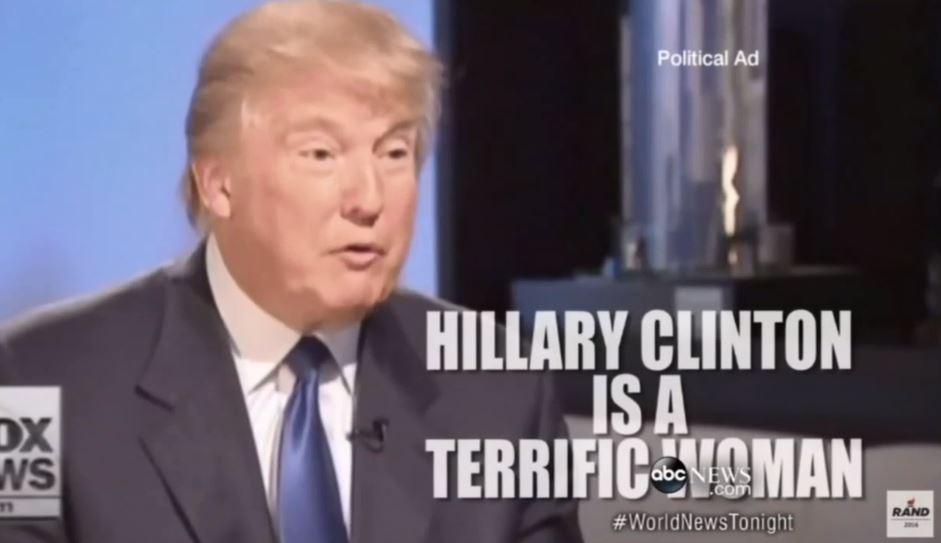 In August, the networks devoted less than two minutes (104 seconds) to criticisms of Trump’s past liberalism from his GOP rivals, including an ad from Kentucky Senator Rand Paul showing video of Trump from previous interviews. ABC’s World News Tonight (August 13) ran clips from the ad, showing Trump declaring: “I probably identify more as a Democrat. And it just seems that the economy does better under the Democrats....I love universal health care....Hillary Clinton, I think, is a terrific woman. I mean, I’m a little biased because I’ve known her for years.”

From September through December, evening news viewers could have seen only a mere 35 seconds of discussion of Trump’s past liberalism. One of the rare examples came on October 27, when ABC’s Jon Karl spent a few seconds reminding viewers of Trump’s record after Trump accused rival Dr. Ben Carson of flip-flopping on abortion. Karl told World News Tonight anchor David Muir: “But, David, Trump also reversed his position on abortion. Back in 1999, he said he was, quote, ‘very pro-choice,’ but hated the concept of abortion. Now, he opposes it.”

Earlier this month, Ted Cruz’s challenge to Trump about his “New York values” drew a bit more than four minutes (287 seconds) of TV news coverage. But Cruz himself faced nearly the same amount of negative coverage (219 seconds) for the phrase’s supposedly implicit insult to New York — an assertion made by Trump at the Fox Business Network debate and quickly echoed by Hillary Clinton and New York City Mayor Bill de Blasio, among others. 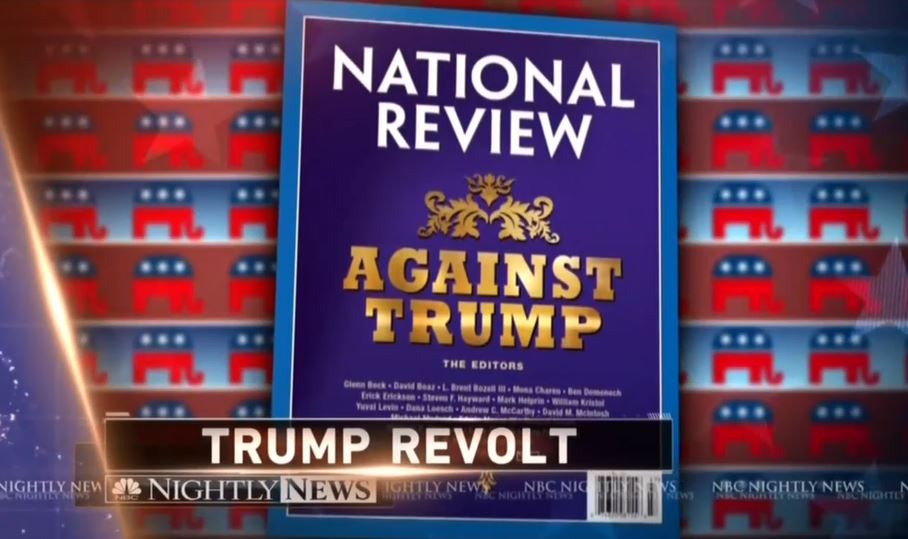 National Review’s unprecedented “Against Trump” cover, arguing the candidate is not a conservative but “a philosophically unmoored political opportunist,” received barely two minutes of coverage from the evening newscasts (127 seconds on the three networks combined). In contrast, those same networks spent nearly 16 minutes this month on Trump’s “birther” challenge to Cruz, suggesting the Texas Senator is ineligible to be President because he was born in Canada (albeit to an American mother).

It’s not as if the networks are shielding Trump from criticism. But the networks are supposed to be covering the candidates for the benefit of primary voters — in the case of the GOP, voters who are mostly conservative.