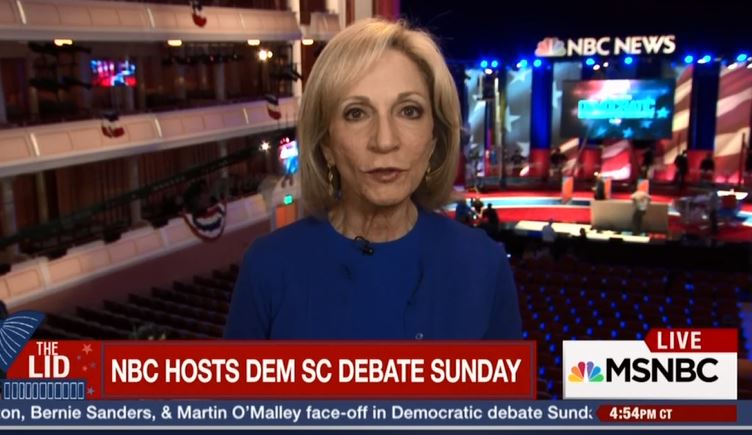 Longtime NBC News correspondent Andrea Mitchell will join Nightly News anchor Lester Holt in moderating tonight’s debate among the three Democratic candidates for President. If history is a guide, Mitchell’s participation is a good omen for Hillary Clinton, since NBC’s “Chief Foreign Affairs correspondent” (who, despite her title, seems to spend most of her time covering U.S. politics) has a long history of fawning over the Democratic frontrunner.

Let’s start by flashing back to April 22, 1994, when then-First Lady Hillary Clinton, under fire for suspiciously pocketing $100,000 (supposedly her profits from trading cattle futures while in Arkansas), held a nationally-televised press conference to rebut allegations of corruption. Moments after the press conference ended, Mitchell admitted that Clinton had dodged the questions, but nevertheless fawned: “I think you saw the talent of Hillary Rodham Clinton as a politician.”

During the investigation of Bill Clinton’s lying under oath and obstruction of justice in 1998, Mitchell made sure to salute Hillary: “Politician, strategist, lawyer, protector — in a marriage that friends say is based on brutal honesty and unconditional love.” (Nightly News, August 14, 1998)

A month later, on the September 11, 1998 Nightly News, Mitchell felt Hillary’s pain: “How can she carry on now that the entire nation can learn the sexual details?”

After Bill’s impeachment debacle, Mitchell was on hand to cheer Hillary’s bid to become a U.S. Senator from New York. When Hillary received the Democratic nomination in May 2000, Mitchell celebrated: “Even long-time political associates concede it is an amazing story of political re-invention....Critics may call it a power trip, but the bottom line, friends say, is that this couple has banded together once again, politically and emotionally.”

Hillary’s election that fall brought more smiles from the NBC correspondent. Reporting on the First Lady’s Senate orientation in December 2000, Mitchell chirped: “It’s a modern fairy tale. From First Lady entertaining 20,000 guests at 26 Christmas parties to just another freshman Senator today arriving for orientation in an SUV, no limo. From America’s finest antiques to unpacking boxes in a basement office. From foie gras to Senate bean soup. The Senator-elect goes to the Capitol.”

Four weeks later (January 2001) when Clinton took her oath of office, Mitchell sounded giddy: “For this political wife, friends say, a dream come true. Today he holds the Bible for her, trading places from when they first came to Washington eight years ago. From the health care fiasco to the Monica humiliation to the campaign many said she would never win, Hillary Clinton is now the most admired woman in America, beating Oprah by a landslide in the latest Gallup poll.”

(That poll, by the way, had just 19 percent choosing Hillary as “most admired,” vs. the four percent who picked Oprah — and 77 percent who chose neither.)

With the War on Terror and invasion of Iraq, Mitchell popped up to bolster Clinton’s national security credentials. “I’ve got to tell you, the rank-and-file military are really happy with her,” Mitchell insisted on MSNBC’s Hardball on August 30, 2004.

Then in February 2006, she was back on the same show to say the same thing: “She’s certainly moved herself over to the middle by getting on the Armed Services Committee, going to Iraq, going to Afghanistan and showing real credentials on military issues and you saw some of her votes on the war. She’s very highly regarded by the rank-and-file military for what she has done in support of the troops.”

Anticipating Clinton’s first presidential campaign, Mitchell was brimming with confidence. Filling in as host of The Chris Matthews Show on December 3, 2006, Mitchell crowed: “Who is the most likely Democratic nominee for President? Any way you slice it, Hillary Clinton is the one to beat.....Hillary hopes to capitalize on the nostalgia that many Americans have for the Clinton years, the good old days.”

Hillary’s 2008 campaign ended in failure, of course, but Mitchell was back in 2012 to urge a future run. “She says she’s out of politics, but she’s the most popular woman in America, according to Gallup, for the tenth year in a row. Meryl Streep recently delivered what sounded like a nominating speech for Clinton,” Mitchell championed on the April 2, 2012 Nightly News.

That story included a clip of Mitchell lobbying Clinton: “There is a growing expectation that you will run for President....Why not?”

In January 2013, Hillary retired as Secretary of State. Despite the Benghazi debacle, Mitchell on NBC’s Today insisted Clinton enjoyed “what is widely viewed as a stellar term as the nation’s top diplomat.”

The night of Hillary’s 2013 testimony about the Obama administration’s failures in Benghazi, Mitchell was ever the reliable cheerleader: “After a fall, a concussion and a blood clot, Hillary Clinton showed rare public emotion, reflecting the toll Benghazi has taken on her....Parrying hostile questions all day, Clinton was also the political pro. Massaging big egos, sidestepping attacks when she could. When she couldn’t, giving as good as she got.”

As the 2016 campaign drew near, Mitchell griped that “conservative” journalists were digging through the archives to report on Hillary’s role in past scandals. “What is new here?” she complained to the Washington Post’s Chris Cillizza on her MSNBC show, Andrea Mitchell Reports, in February 2014. She made it clear that her preference was to ignore the past: “Will people say, ‘Wait a second, that’s the ’90s. The statute of limitations on those scandals are long since passed?’”

Mitchell was also bothered by any suggestion that Hillary, who will be 69 years old on Election Day, might be physically unfit for the presidency. After Karl Rove in May 2014 talked about Clinton’s hospitalization for a fall and concussion 18 months earlier, Mitchell acidly reported on the Nightly News: “There is no longer any doubt that some powerful Republicans are playing hardball against Hillary Clinton, raising questions about her age and her health, even before she decides whether she’s a candidate....As one Republican operative said, ‘Karl is either an evil genius — or just evil.’” 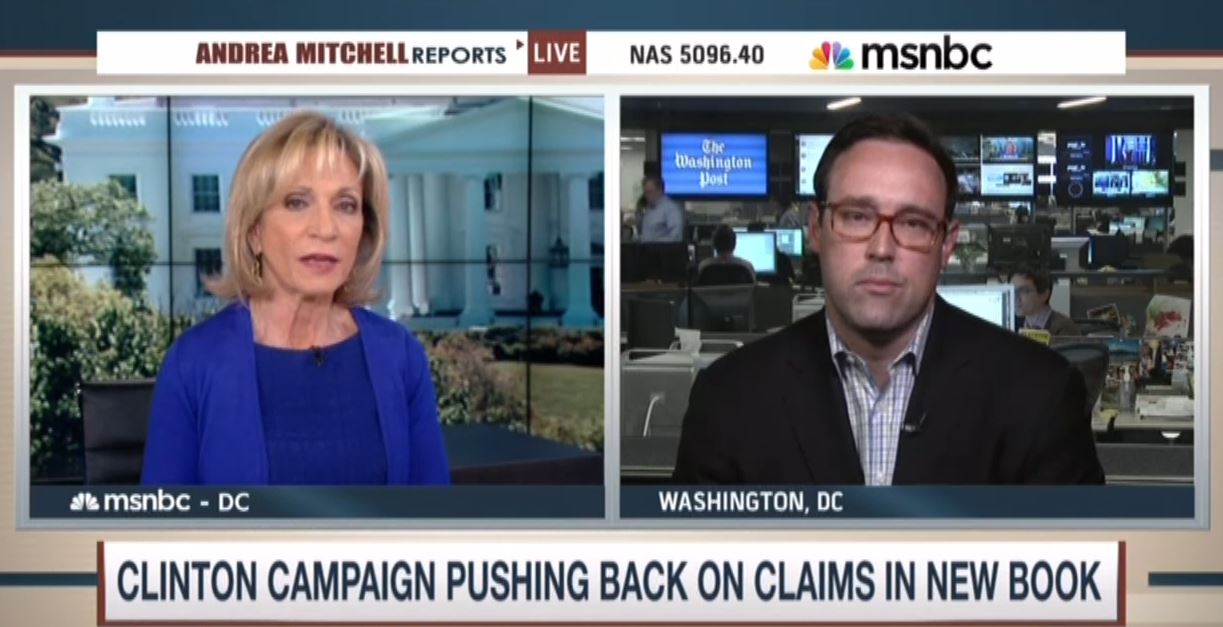 In April 2015, Mitchell again jumped to Hillary’s defense when author Peter Schweizer (Clinton Cash) documented how the Clinton Foundation received large donations from corporations and foreign entities with business before Hillary Clinton’s State Department. “It’s been the week that was and Hillary Clinton had a tough time with the Cash book,” Mitchell argued on MSNBC. “But truth be told, having gone through it last night once we got the book yesterday, there are a lot of holes....”

Mitchell also disliked news reports suggesting Hillary was being investigated by the FBI for mishandling classified material, preferring the Clinton campaign line that the investigation was about the server, not Clinton herself. On her MSNBC show in August, she empathized with Clinton press spokeswoman Jennifer Palmieri about polls showing the public doubted Clinton’s honesty: “These unfavorable poll numbers came immediately after an inaccurate report [in the New York Times] that you confronted directly, which led to a lot of other inaccurate reporting before it was corrected — the inaccurate reporting about the referral from the Inspectors General. Do you feel that there is a problem, that she’s being treated unfairly?”

That same month, she fretted about how difficult the e-mail scandal was for Clinton to shake: “There’s going to be a cloud of suspicion, though, by those who just want to see conspiracy theories. There’s almost no way she can clear this up to the satisfaction of critics on the other side in terms of the politics of this.”

Each of the Republican candidates would no doubt enjoy a debate moderated by a journalist with such a track record of admiring, fawning coverage. That’s the advantage Hillary Clinton has tonight — and will have in the fall if she wins her party’s nomination.