The press release takes issue with the scientists the AP cited, as well as scientists it ignored. 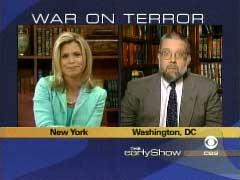 On the "Saturday Early Show" this past weekend on CBS, co-host Tracy Smith interviewed CBS terrorism analyst Michael Scheuer. Scheuer, who once attempted to spin the death of the leader of al Qaeda in Iraq, Abu Musab Zarqawi, as being good for al Qaeda, used this occassion to claim that we are losing the global war on terror:

Warren Buffett, in addition to his admirable philanthropic endeavors, has also been trying to make sure that the Federal Government continues to be the recipient of your largess from beyond the grave:

Buffett sent a letter to Salazar, D-Colo., the senator's spokesman, Drew Nannis, said. The multibillionaire Monday called on Congress not to repeal the tax.

The first clause of one sentence in a Tuesday MSNBC.com blog entry: "Folks, we need to pause here and really examine just how derelict the MSM has become..."

Howard Kurtz Troubled by 'Over the Top Times-Bashing'

By Greg Sheffield | June 27, 2006 2:50 PM EDT
The criticism of the New York Times for its bank-monitoring story has gotten so bad, says Washington Post media writer Howard Kurtz, that "I think those folks would repeal the First Amendment tomorrow if they could," he says, speaking of conservative criticism in the blogosphere and elsewhere.

The New York Times’ irresponsible banking spy scoop is looking more and more like it will backfire on the paper, causing both a public relation nightmare and raising plausible legal concerns for both the leakers and the journalists they leaked to, as conservatives debate consequences for the paper's behavior.

By Greg Sheffield | June 27, 2006 1:36 PM EDT
A regular advertiser in the Atlanta Journal-Constitution newspaper, the Mercedes-Benz dealership RBM of Atlanta, has apologized for an editorial cartoon by Mike Luckovich that compared Al-Qaeda terrorists to the U.S. in torturing captives. Lest anyone think they were sponsoring the cartoon, the dealership paid for a full-page ad in the paper to beg for forgiveness. 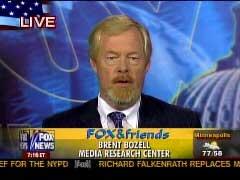 MRC President Brent Bozell appeared on FNC's "Fox & Friends" on Tuesday morning to address the "breathtaking arrogance" of the New York Times deciding what national-security secrets should be divulged.

Dan Rather had no problem playing down his successor at the CBS Evening News, Katie Couric, and had no problem praising himself as someone who will "go down in history with Walter Cronkite."

I asked him if Katie Couric could do as good a job.

He said, "CBS thinks she will."

ABC’s Jake Tapper had an interesting -- if not entirely dismissive -- take on the recent panel discussion of the Fox TV series, 24 hosted by Radio’s Rush Limbaugh.

Calling it a “love-fest”, Tapper was in the audience at the Heritage Foundation’s 24 discussion panel and wrote about it on his ABC blog as well as doing an on-air report on Nightline (June 23rd) and an ABC News “webcast” report.

For Limbaugh, Laughter Best Medicine: Told Doctor I Was Worried About Next 'Election'

If the mark of a person at ease with himself is the ability to have a chuckle at his own expense, then Rush Limbaugh is a supremely serene man.

Readers are duly cautioned to put down their cups of coffee, for this one is toooooo funny. The left-leaning website “Raw Story” on Monday reported comments made by members of the popular conservative website “Free Republic” to a post concerning the recent revelations by The New York Times of the counterterrorism program using SWIFT. This goes somewhat hand-in-hand with what NewsBuster Tim Graham reported Tuesday concerning accusations of such behavior from the right by a New Orleans journalist. Is this a strategy developing on the part of the media to obfuscate the real issue?

Regardless of the answer, the comedy at Raw Story actually began with the headline (coffee cups down, please!): “Posters at right-wing board threaten to kill Times editors, reporters.”

Don’t pick up your coffee yet, for the article began: “Posters at the right-wing Free Republic message board today were roused into a fury of indignation by a news story about the New York Times' revelations of the administration's illegal programs of warrantless surveillance.”

Illegal programs? Warrantless surveillance? There have been no allegations, even by The Times, that any laws either domestic or international were violated by this program. Moreover, subpoenas were issued for all of the banking examinations performed during this operation. However, that was just the beginning, for the article then quoted some of the responses posted at FP: