New York Times reporter Elisabeth Bumiller today tried her best to write an article without mentioning anti-war heroine Cindy Sheehan, as well as without impugning the president.  Unfortunately, she failed.

In an article about the president’s speech to thousands of National Guard members and their families in Nampa, Idaho, it only took two paragraphs before the story turned from Mr. Bush’s vision of Iraq and his appreciation for the sacrifice these families and their relatives are making into another in a long litany of Cindyfests:

Defending his administration's military stance for the third day in a row, he presented another tough, if implicit, rebuttal to war critics like Cindy Sheehan, the mother of an American soldier killed in Iraq who has generated a monthlong protest outside his Texas ranch. Mr. Bush said, "As long as I'm the president, we will stay, we will fight and we will win the war on terror."

The president said withdrawing troops now - as Ms. Sheehan advocates - would "only embolden the terrorists and create a staging ground to launch more attacks against America and free nations."

Yet, most abhorrent is this:

By Clay Waters | August 25, 2005 9:29 AM EDT
If any more proof was needed that former NBC reporter and now NYT columnist Bob Herbert was a reliable liberal, Herbert's Thursday's column shows he firmly believes in recycling.

In "Truth-Telling on Race? Not in Bush's Fantasyland," Herbert recycles a column he wrote back on May 20, 1999. Of the 16 paragraphs of Herbert's "new" column, the middle part (nine graphs) are lifted almost verbatim from 1999.

WashPost Tries to Handicap Conservatives in the Sports Section

The Washington Post is so committed to liberal bias that it can't even keep it out of the Sports section. The back page of Thursday's Sports is topped by an article on former EPA administrator Christie Todd Whitman, ostensibly about golf, but really about conservative Republican-bashing:

'Should he be on Vacation?'

That's the title you will see on the mainpage of AOL News section if you are one of AOL's 21+ million subscribers. AOL, a Time Warner Company (which notably also runs CNN), suggests that Bush is on nothing more than a vacation, even opting out on using the more popular "working vacation" title. Rick Moore previously pointed out the highly suspect questions asked of AOL subscribers.

AOL Headline: "Should He be on Vacation?"

If you're an AOL user and signed on today, the top news item was a photo of President Bush at the wheel of his pick-up truck, and the headline "Should He Be On Vacation, Long Break Stirs Controversy".  Of course, they had the obligatory unscientific "polls" where the AOL users get to express the views.

The poll questions were as loaded as the headline:

2.  How hard does it seem like Bush is working on his vacation?  Very/Somewhat/Not at All

WorldNetDaily is reporting that Cindy Sheehan called the terrorists in Iraq "freedom fighters." Newsmax did so earlier Wednesday. Evidently, no one in the MSM has bothered to pick up on it.

Selection bias from the Associated Press

By Lyford Beverage | August 24, 2005 10:52 PM EDT
Many times the bias in the mainstream press shows itself in just the stories it chooses to run. The homeless disappeared from the press when a Democrat was in the White House, President Clinton's vacations were never a big story the way that Reagan's and Bush's have been. Well, another story has crossed the wire tonight that falls, I believe, into the same category. Of All Gas Consumers, Bush May Be Biggest

Delusions at the Stephanie Miller Show

It was almost too easy. Up until this morning (August 24, 2005), I had never heard the Stephanie Miller Show on Air America's outlet, KTLK, in Los Angeles. Within 45 seconds (I swear), in a discussion on the media coverage of the recent incendiary remarks by televangelist Pat Robertson, I heard Miller mislead her audience by suggesting that there has been only modest coverage of this story! [link to audio (about 10 minutes in)]

Olbermann Targets Hume as “Worser” in “Worst Person in the World”

On his MSNBC Countdown show on Wednesday night, Keith Olbermann, who described the Fox News Channel as “just a brand name, not a description,” named FNC's Brit Hume his “runner-up” in his daily “Worst Person in the World” gimmick. What riled Olbermann? Hume daring to criticize as “'excessive' the TV coverage of Pat Robertson's call for the assassination of President Hugo Chavez of Venezuela because, he said, Robertson has 'no influence.'” Olbermann sarcastically added: “Probably why Fox has had Robertson on their network ten times in the last year.” By that reasoning, Olbermann would have to consider influential the parade of lawyers, family friends and other hangers-on brought out many times a day on FNC and MSNBC to talk about the Natalee Holloway case.

Links to Hume's original words and a full transcript of Olbermann's "worser” reasoning for Hume follows. 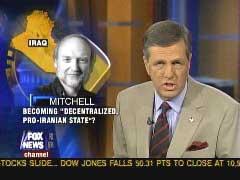 In a Monday posting, Greg Mitchell, the Editor of the leading newspaper industry magazine, Editor & Publisher, urged newspapers to editorialize about getting the U.S. out of Iraq.

Call him a protectionist or just call him “the Dan Rather of financial journalism,” as one conservative critic referred to CNN’s Lou Dobbs. No matter what you call him, the truth is he’s one of the biggest opponents of free trade anywhere. Dobbs, who anchors “Lou Dobbs Tonight,” is a veteran business reporter who spends his time these days giving industry the business. The worst part of it is that viewers are missing the real story.

CNN's American Morning was all about "Troubling News for President Bush." On the top of the list, a new poll showing a 40% approval rating and, of course, Cindy Sheehan. President Bush is in Idaho meeting with military families.

By Lyford Beverage | August 24, 2005 4:21 PM EDT
I wrote a week and a half ago that the AP was acting as a PR firm for Cindy Sheehan. It doesn't appear that anything's changed. At all. If anything, it has gotten worse. They're still refusing to run with any of the controversial statements that she's made. They've not reported her comments on Hardball that "we should have gone after al Qaeda and maybe not after the country of Afghanistan." She told Chris Matthews that the purpose of her visit to Crawford "is actually to hold [the President] accountable for things he has already said," but no one in the "tough, skeptical" mainstream press has done anything to hold her accountable for the things that she's said.

Why Did The Media Lose 'Why'?

The web page publication Yahoo News, on August 21, 2005, ran a banner headline reading “Cindy Sheehan Stirs Up Long Overdue Anti-War Movement”. The text of the article reads “She is no glamour girl, and yet she has a throng of admirers who have been nursing inside themselves, for the last two years and more, the secrets she implicitly reveals.”

By Mithridate Ombud | August 24, 2005 2:39 PM EDT
St. Petersburg Times reporter David Adams talks about his Natalee Holloway story. Note to David: The best way to start an interview is probably not to lie.

The last time I got such a big response was in the days before email and the Internet.