C-SPAN Flap With Pelosi Leads To Better Access For Public

Bloggers, vloggers and Youtubers everywhere can rejoice! Thanks to some wrangling between a Republican group, C-SPAN and Nancy Pelosi along with lots of questions by bloggers from all political spectrums, people now have free access to much of C-SPAN’s content.

Does the Washington Post practice bias by omission out of sensitivity to fellow liberals? Open to Friday's Style section, and the bias by omission (and delay) is, at least to a conservative, utterly mind-boggling. As Howard Kurtz covered the story of Rick Kaplan arriving at what seems like his 26th appointment at the top of a liberal network or show, when did Kurtz explain that then-ABC producer Rick Kaplan was an unpaid adviser to Bill Clinton through his first Gennifer Flowers scandal, told him which shows to do and how to be credible? He mentioned in paragraph 16 -- and, um, not at the beginning of paragraph 16 -- Kurtz related "A personal friend of Bill Clinton, he drew some criticism for twice sleeping in the Lincoln bedroom but said it did not affect his journalism." That was it. (Kurtz also never explains Kaplan was his boss at CNN for years.)

But the truly stupendous act of omission was the largest piece on the front of Style, William Booth's big profile of Bill Maher, which does not even mention -- even as the reporter described last Friday's show in detail as he witnessed it live -- Maher's passionate defense of commenters at the Huffington Post who desire Dick Cheney assassinated.

As documented in a Thursday MRC CyberAlert posting reprinted here, Kaplan has had a long record of friendly relations with former President Bill Clinton, advising Clinton on how to respond to the Gennifer Flowers scandal in 1992 and blocking anti-Clinton stories from appearing on Nightline. Kaplan has also been hostile to conservatives and once even declared that disgraced CBS anchor Dan Rather's "legacy" was "the gold standard journalists today have struggled to live up to."

Reuters Fantasy: What If Cheney Quit?

Reuters fantasizes what would happen if Vice President Dick Cheney quit? What would happen next? Who would replace him? Who would play him (or Condi) on "Saturday Night Live" I’m sure that it raised a few hopes. It starts out documenting Cheney’s health problems and ads in an easy little jab:

The Numbers on Moral Decline

By L. Brent Bozell III | March 9, 2007 12:00 AM EST
Americans look into their television sets, and are getting a high-definition dose of Hollywood's take on values. Fully 68 percent of Americans in the survey said the media are having a detrimental effect on moral values in America.

CNN put together a story featuring reporter John Roberts that absolutely hammered Vice President Cheney on Wednesday night’s Paula Zahn Now, concluding with an anonymous Republican suggesting the party needed an "exorcism" to rid itself of all its missteps and corruption.

When the Laura Ingraham show played clips, Ingraham suggested reporter John Roberts should call in – and he did. Roberts protested that the source was a "devout Republican," and not former Clinton aide David Gergen, as callers joked.

He suggested his story was "very narrowly sliced" to deal just with Cheney, and not the Libby trial. It was narrow, alright. (MP3 audio at NRO.)

Time magazine's cover story image as reality? Displaying a mini-instance of pack journalism, MSNBC and CNN shows on Thursday afternoon and night pounced on Time magazine's cover story, “The Verdict on Cheney” beside a picture of Cheney under some dark clouds, as evidence Cheney's influence is declining in the White House in the wake of the Scooter Libby verdict. It may be, but the graphics on a magazine cover hardly proves it. Plugging an interview with Michael Duffy, the author of the cover story, MSNBC's Chris Matthews asserted on Hardball: “More coming here about amazing problems facing the Vice President. He's on the cover of Time magazine as we speak and it looks bad.”

On CNN's Paula Zahn Now, Zahn trumpeted how “tonight we're bring out into the open Vice President Cheney's downhill slide” which is “not pretty” and is illustrated by, as she instructed viewers, “Look at the cover of the new Time magazine: The Vice President under a dark cloud. The headline: 'The Verdict on Cheney.' The story inside even brands him as 'the enemy within' the White House, dragging the whole administration down with him." Over on MSNBC's Countdown at the same 8pm EST hour, fill-in host Alison Stewart highlighted how “special prosecutor Patrick Fitzgerald referred to the quote, 'cloud over the Vice President' in his summation at the Libby trial. The folks at Time magazine painting that cloud over Mr. Cheney quite literally in their art for the new cover story, going as far as to call him quote, 'one of Bush's biggest liabilities.'"

Reuters’ environment correspondent, Deborah Zabarenko, debunks the idea that there is a “scientific censorship” by the Bush Administration about global warming, although that isn’t what the headline, “’Don’t discuss polar bears’: memo to scientists,” indicates. Just another example of a headline not reflecting the content of an article.

No, the "Nightly News" anchor is not making a sequel to a Ben Stiller comedy. He was blogging about a flight aboard "Jessica," an NBC-chartered Dutch-built Fokker jet.

From the March 8 edition of James Taranto's Best of the Web. (H/t: Nathan Burchfiel):

Reuters has a cute little human interest story about funny people from Vermont holding "town meetings" where they call for President Bush's impeachment. What caught our eye was not the darling little Vermonters, though, but something in this paragraph:

It turns out that the utopian dream, Wikipedia, has a problem. And I don’t just mean the consistent subtle, and at times, blatant leftward tilt. Wikipedia is an “open-source” encyclopedia—an online encyclopedia created by users instead of contributors who are chosen for their expertise. The idea is that “the community” can do just as well or better than the professionals. The anonymity of the Internet and the lack of oversight on Wikipedia means that all contributors may not be who they seem.

NBC had some "horror stories" to share with its audience on March 7, according to "Nightly News" anchor Campbell Brown. Brown introduced the report by Lisa Myers that told the story of Wesley Wannemacher, a man who's $3,200 credit card debt ballooned to $10,700 after interest and penalties.

Evening newscasts use 'horror stories' but leave out personal responsibility. 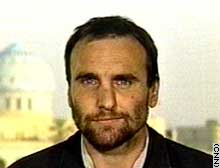 Something is happening on the ground in Iraq. Something that even certain representatives of the MSM can't deny. Earlier this week, as NewsBusters noted here and here, NBC's Brian Williams, reporting from Iraq, offered some unusually positive observations. Now comes this eye-opening exchange from earlier this afternoon on CNN International between host Jim Clancy and correspondent Michael Ware, also reporting from Iraq:

The atypical remark was made in a segment of "Global Warming, Cool Solutions" during the March 7 CBS "Evening News."

MacVicar's words are less surprising when you know that the companies in the CBS story are raising capital for green investments to help fight global warming.