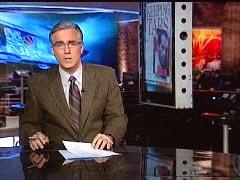 I don't track Keith Olbermann's descents into mean-spirited bad taste systematically enough to definitively proclaim that he has charted a new low. Let's just say that he has once again indulged his proclivity to traffic for political purposes in the worst of ill-will.

Katie Couric: "So Many of Us Ask, 'Is There Any Way Out of This Nightmare?'" 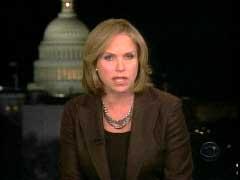 ABC anchor Charles Gibson and NBC anchor Brian Williams let the Iraq Study Group's conclusion, that “the situation in Iraq is grave and deteriorating,” speak for itself as they refrained from additional editorializing in opening their Wednesday night newscasts.

By | December 6, 2006 7:14 PM EST
As already noted here on NewsBusters, the Senate held a hearing today examining the role of the media in promoting climate alarmism. With others covering the newsmaking part of the discussion, I decided to drop by to observe things from a blogger's point of view.

I went into the hearing expecting it would be more interesting than your typical congressional hearing and wasn't disappointed. Dr. David Deming, a geophysicist from the University of Oklahoma recounted an experience he had with an NPR reporter who hung up on him after he declined to say that he thought global temperature increases were human-caused.

Apparently I was not joined in my assessment of things by CNN "American Morning" anchor Miles O'Brien who fell asleep during the discussion, according to several witnesses. Only a colleague's nudge prevented the slumbering former science correspondent from missing the entire discussion. One would think that O'Brien could have scared up some more interest considering his ongoing feud with Sen. Inhofe. The two have tangled on O'Brien's CNN show and both have denounced each other from their respective platforms.

The VRWC is apparently even vaster than we realized.

In a fund-raising email today David Brock, President of Media Matters, the organization that some might consider the left-wing counterpart to NewsBusters, claimed [emphasis added]:

As NewsBuster Matt Sheffield reported Tuesday, the Senate Committee on Environment & Public Works held a hearing Wednesday to discuss the media’s role in causing global warming hysteria in the country. The committee’s website encapsulated the proceedings (emphasis mine throughout):

Sen. James Inhofe (R-Okla.), Chairman of the Environment & Public Works Committee, said today’s hearing about the media and climate change revealed that “Scare tactics should not drive public policy.” The hearing’s purpose was to examine the media’s presentation of climate science and featured scientists and media experts.

“As the Democrats rush to pass costly carbon cap legislation in the next Congress, today’s hearing showed that the so-called ‘scientific consensus’ does not exist. Leading scientists from the U.S. and Australia denounced much of the media for becoming advocates for alarmism rather than objectivity.” Senator James Inhofe said.

As fellow news analyst Geoffrey Dickens blogged, Hollywood star Leonardo DiCaprio bonded with Matt Lauer on his global warming hype movie, Eleventh Hour. But before DiCaprio demands a host of new government regulations to clean up the environment, he should look at his own Hollywood pals. On Wednesday’s Fox and Friends First, hosts Steve Doocy, Gretchen Carlson, and Judge Andrew Napolitano hosted author and columnist James Hirsen to expose the hypocrisy of the Hollywood elite.

Econ 101: Who Benefits from Boost in Student Grants?

In a story on the resignation of United Nations ambassador John Bolton, reporter Helene Cooper, for the second time in three weeks, suggests (mockingly?) that defeated Sen. Lincoln Chafee, one of John Bolton's chief Republican critics, is actually a possibility to succeed Bolton as ambassador to the U.N.

Earlier today my colleague the MRC's Business & Media Institute director Dan Gainor testified before a Senate panel on the media's biased presentation of climate change science. Gainor's testimony is a coup for the MRC and invaluable for the public record. Of course the aim is not to legislate or regulate the media. By no means. But it's an honor when your boss gets to flesh out our hard work and intensive research for the congressional record.

On Wednesday morning, the highly anticipated report from the Iraq Study Group [ISG] was released to the public. The ISG’s report contained seventy-nine recommendations for the United States in its effort to lessen the violence in Iraq and protect American forces. One of the major recommendations of the panel was a call for the withdrawal of most U.S. combat troops by early 2008.

By Tom Blumer | December 6, 2006 3:23 PM EST
Following up on one aspect of Cavuto's rout of Krugman on Fox News yesterday (covered overall by Noel Sheppard earlier today here at NewsBusters) --

Cavuto elicited this stunningly out-of-touch statement from Krugman about the situation for the average person and the middle class that is obviously not true (excerpt is at the end of this Hot Air clip):

Testimony to the Senate Environment and Public Works Committee

Subject: Global Warming and the Media

Testimony to the Senate Environment and Public Works Committee

Subject: Global Warming and the Media

The much-hyped Iraq Study group has finally released its report. Hot Air has a nice roundup, you can read it in HTML form via NZ Bear. LGF looks at the group's conclusions regarding Israel and finds much to dislike. Related: Wacky lib bloggers are upset with incoming Democratic congress's lack of desire to impeach President Bush.

In other news, OpinionJournal has an interesting op-ed by a sister of one of the pilots who was killed on 9/11 about the topic of airline security and the Muslim imams who were ejected off a U.S. Airways flight recently.

In lighter fare NRO has a funny joke about God's profession that I won't reveal the details to; Reason Magazine has an interview with the creators of South Park (hat tip: NB reader sarcasmo) in which Matt Stone and Trey Parker comment about a number of subjects including their unsuccessful campaign to air an innocuous cartoon depiction of the founder of Islam Mohammed. At least they weren't fired or threatened with death, though.

It’s almost becoming a daily occurrence now, isn’t it? Another major media outlet has confirmed that all the pre-election blather concerning a withdrawal of American troops from Iraq if Democrats took over Congress was just another part of that Party’s elaborate bait and switch scheme. This time on its knees in the confessional was Newsweek (hat tip to NB member “aero”), and none other than two of its crack investigative reporters, Michael Isikoff and Mark Hosenball (emphasis mine throughout):

In a surprise twist in the debate over Iraq, Rep. Silvestre Reyes, the soon-to-be chairman of the House Intelligence Committee, said he wants to see an increase of 20,000 to 30,000 U.S. troops as part of a stepped up effort to “dismantle the militias.”

Excuse me? Wasn’t this man appointed by incoming Speaker Nancy Pelosi who went around the country promising voters that troops would be withdrawn from Iraq if Democrats won and she became Speaker? Are you kidding me? Shouldn’t this evoke tremendous anger from the writers at Newsweek? Au contraire: