In today's Chicago Tribune, LA Times correspondent Peter Wallsten writes in "For the South, Harold Ford's candidacy could make history" about the Democratic congressman's quest for a Tennessee Senate seat.

The New York Times is Selective with Its 'Secrets'

If only they had decided the story was not worth printing before they decided to run with it.

Michelle Malkin writes in her syndicated column that the New York Times has decided the "secret" it exposed was not so secret after all. All that fuss over a story that, it turns out, everbody already knew.

Of All the Photos of Rush, This is the One Google Chose

Don't know if it will still be up when you go there, but when I went to Google News Top Stories at about 2:25 PM EDT, this is the photo of Rush Limbaugh that I found, accompanying the various stories reporting that Rush will not be charged in the discovery, when recently going through customs, of a prescription medicine not in his name.

NewsBuster Noel Sheppard has written elsewhere about Google's censorship of conservative web sites, and others have accused it of a liberal slant in its selection of stories.

Cafferty: Bush 'Might Have Been On To Something' With North Korea

On the 7pm hour of CNN's The Situation Room on Tuesday afternoon, Jack Cafferty admitted President Bush "might have been on to something" when discussing the Axis of Evil in his 2002 State of the Union address (video link from Expose the Left to follow). The topic of the hour was North Korea's long-range missile "testing". North Korea is a country in Bush's Axis of Evil.

CAFFERTY: That was January 2002, the president referring, of course, to Iraq, Iran and North Korea. Fast forward four years. The U.S. has now been involved in the war in Iraq for well over three years with no end in site. Iran continues its efforts to enrich uranium, insisting it's just for peaceful purposes while many around the world fear they are actually embarking on a nuclear weapons program. And now we have North Korea going ahead today with test missile launches, including the failed launch of at least one long- range missile today. Looks like President Bush might have been on to something, doesn't it. Here's the question, which country from President Bush's axis of evil, Iraq, Iran, or North Korea poses the greatest threat to the United States. E-mail your thoughts to caffertyfile@cnn.com or go to cnn.com/caffertyfile. John?

CNN Puts Food Police on Patrol in the Grocery Aisle

By Greg Sheffield | July 5, 2006 1:49 PM EDT
Where did he go wrong? Syndicated sports columnists Norman Chad was trying to lecture that there were not enough black sports editors in America, only 4 of 305. As Tim Graham noted, he even managed to get in a dig at Newt Gingrich: "We're whiter than Newt Gingrich's Fourth of July barbecue."

But later in the piece, he said he knew one of those few black editors, Garry D. Howard of the Milwaukee Journal Sentinel.

Via Romenesko, we learn that syndicated sports columnist/humorist Norman Chad was decrying the unbearable whiteness of sports section editors, but he encapsulated it with a political wisecrack: "We're whiter than Newt Gingrich's Fourth of July barbecue." (The column ran in the Washington Post on Monday.) 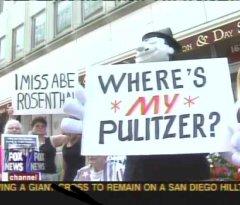 On July 3, the D.C. Chapter of FreeRepublic.com and Accuracy in Media held a protest outside the Washington bureau of the New York Times. Michelle Malkin has pictures from the event.

The protest was reported on Fox News' "Special Report with Brit Hume."

"Fredo, you're my older brother, and I love you. But don't ever take sides with anyone against the Family again. Ever." - Michael Corleone, The Godfather

Mark Hohmeister writes for the Tallahassee Democrat about picking editorial cartoons. While he admits to being liberal, he also notes that one shouldn't pick editorial cartoons based on your personal ideology. Last week he made the mistake of picking one where Uncle Sam was reading the New York Times with the masthead saying "All the Treason Fit to Print."

He heard back from unhappy readers, which didn't surprise me, but he also heard from his former publisher of the Democrat, who said:

"In more than 50 years of various responsibilities for newspapers and editorial pages, I've defended a lot of editorial cartoons. But this one is indefensible."

Is it? I've yet to hear from anyone who can tell me what the Times did was not a violation of Title 18, 794 right down to the letter of the law. Greg Sheffield also pointed out a previous time the media walked away with the blood of American soldiers on their hands.

What should be indefensible is the fact that journalists profit from spilt blood. Peace and tranquility is not in the best interests of the media. 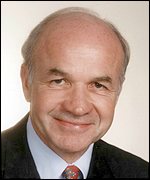 Talk about a decent interval . . .

Just 74 words into its article announcing Ken Lay's death, the AP somehow found it pertinent to report that Lay was "nicknamed 'Kenny Boy' by President Bush."

Oops, the MSM Do It Again: NYT Overstates Closeness of Mexican Presidential Vote

Q: Where is approximately 380,000 votes "the narrowest of leads" in an election?

A: In the New York Times, but only when the leftist candidate is trailing.

NYT Contradicts Itself: Was Bank Spy Program a "Secret" or Common Knowledge?

The Times backpedals a bit from its irresponsible story revealing a successful terrorist surveillance program involving international bank transactions. After playing it up as a lead story June 23, nine days later it's shrugged off as common knowledge by the very reported who trumpeted it on the front page.

Milbank: Dick Cheney Leading a 'Firing Squad' on the Press

Someone at the Washington Post must be leaning their head out of an office door, shouting "We need more Milbank!" Sort of like the old "Saturday Night Live" skit about Blue Oyster Cult needing "more cowbell." So the Post's Sunday "Outlook" section had a new feature called the "Zeitgeist Checklist," which is pretty much a complete ripoff of Jon Alter's dopey "Conventional Wisdom Watch" feature in Newsweek.

What is it about celebrations of national pride that Washington Post columnists find so distasteful? Remember Marc Fisher declaring the Pledge of Allegiance "has a creepy totalitarian feel to it, with or without the obviously unconstitutional, McCarthy-era addition of the God bit"?