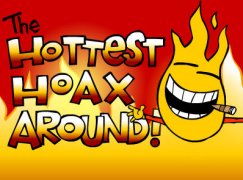 Admit that you have been reading NewsBusters, particulary the story posted by your humble correspondent on Sunday about how the U.S. media has been ignoring observations of a noted climate scientist, Professor Mojib Latif of Germany's Leibniz Institute, that we are entering a period in which the earth is likely to cool for a period of one to two decades.

The very day after the NewsBusters story was published, New York Times writer Andrew Revkin by strange "coincidence" decided to mention Professor Latif and his inconvenient observations about global cooling. Poor Andy sounds more than a bit peeved that Mother Nature is just not cooperating with the global warming dogma:

The world leaders who are meeting at the United Nations to discuss climate change on Tuesday, are faced with an intricate challenge: building momentum for an international climate treaty at a time when global temperatures have been stable for a decade and may even drop in the next few years.

Oops! So maybe we don't have to spend hundred of billions of dollars to fight a problem that doesn't exist? Back to square one. However, Andy just can't let go:

The plateau in temperatures has been seized upon by skeptics as evidence that the threat of global warming is overblown. And some climate experts worry that it could hamper treaty negotiations and slow the progress of legislation to curb carbon dioxide emissions in the United States.

Scientists say the last decade of climate stability — which follows a precipitous rise in average global temperatures in the 1990s — is a result of cyclical variations in ocean conditions and has no bearing on the long-term warming effects of greenhouse gases building up in the atmosphere.

Left unsaid is that maybe, just maybe, the rise in global temperatures in the 1990s were also the temporary result of cyclical variations in oceanic or other conditions.

Stand by now for the very first mention of Professor Latif in a major U.S. media outlet...thanks to a helpful nudge from Yours Truly?

Dr. Mojib Latif, a prize-winning climate and ocean scientist from the Leibniz Institute of Marine Sciences at the University of Kiel, wrote a paper last year positing that cyclical shifts in the oceans were aligning in a way that could keep the next decade or so relatively cool, even as the heat-trapping gases linked to global warming continue to increase.

And yet those "heat-trapping gases" seem to not be causing global warming. Paging Al Gore!

But Dr. Latif, who gives around 200 talks to the public, business leaders and officials each year, said he had been met with confusion and even anger when he tried to describe this normal variation in climate while at the same time conveying the long-term threat of global warming.

Anger generated by speaking inconvenient truths. But not to fear, liberals. Latif is still sticking to the long term global warming dogma...at least for now.

“People understand what I’m saying but then basically wind up saying, ‘We don’t believe anything,’ ” he said in a telephone interview.

Please, stop with the inconvenient observations that run counter to our global warming belief!

Other climate researchers dispute Dr. Latif’s forecast, saying that climate cannot be reliably predicted on such a short time scale, though even they agree that sooner or later, cool stretches are inevitable.

Huh? Climate researchers are saying that climate can't be reliably predicted on a short time scale yet somehow global warming can be presented as a guaranteed scientific fact many years into the future? Sorry, does not compute.

Whatever the next decade might hold, critics of global warming have lost no time in using the current temperature plateau to build their case.

"Temperature plateau" being a euphemism for "cooling." Go ahead and shout it out loud and proud, Andy. COOLING!

Oh, and am I being paranoid in thinking that Revkin is referring to you-know-who in the following passage?

The recent stability of global temperatures makes regular appearance in blog postings disputing the reality of global warming and is frequently invoked by pundits who oppose the climate bill that passed the House earlier this year and is now pending in the Senate.

Blog postings such as in NewsBusters? However, I never claimed that global temperatures are stable. Instead, as evidenced by the "inconvenient facts" such as that provided by Professor Latif, they are actually decreasing.

Finally Revkin makes a shocking admission...global warming dogma just might not be infallible:

Most climate scientists stand firm in their projections of centuries of rising seas and other disruptive effects of a warming planet if humans take no steps to reduce their emissions of greenhouse gases.

Still, those projections are based on models, interpretations of tree ring variations and other indirect assessments of past temperatures that, while persuasive to most climate scientists, are not infallible. A clearer view of whether the recent temperature plateau undermines arguments for dangerous climate change in the long run should come in a few years, as the predictions made by the British climate researchers are tested.

Thank you for allowing the possibility that global warming proponents might not be infallible. It might be nice if you pass that word along to the governments of the U.S.A. and the rest of the world before they toss hundreds of billions of dollars at a problem which might not even exist.

You have made good progress, Andy. We are all proud of you. However, please don't let Pinch catch you looking at NewsBusters on your monitor. It could get you in a heap of trouble.