Cheap Shot of the Day, Courtesy of AP

By Tom Blumer | June 1, 2006 1:25 PM EDT
This is the first paragraph of the AP's unattributed report on the good month for retail sales:

NEW YORK (AP) — Consumers apparently shook off their worries about higher gas prices during May, shopping with enthusiasm at apparel stores and malls and giving many retailers better-than-expected results.

By Greg Sheffield | June 1, 2006 12:57 PM EDT
Economist Thomas Sowell says it's too soon to cheer on the destruction of the mainstream media, who still wield enormous clout.

Conservatives who point out the declining audience for the big television network newscasts, and declining public trust of the media in general, often underestimate how much clout the liberal media still have.

The Strange Sound of Commercialism on Air America Radio

Because it’s been so heavily subsidized, you forget that Air America Radio hosts do shameless commercial plugs like any other talk-radio star. I’ve heard Al Franken chat about his Craft-Matic adjustable mattress, for example.

By Greg Sheffield | June 1, 2006 11:59 AM EDT
It's not quite clear what Reuters hoped to accomplish with this picture. Their photographers take thousands of pictures, most of them useless, and surely this one should have remained in the archives.

If the goal is to provide pictures for liberal blogs, then this fits into that objective. 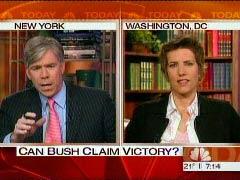 Misty, Watercolor Memories Of The Way Katie Twisted the News

By Tim Graham | June 1, 2006 10:34 AM EDT
As Katie Couric departed the Today show after 15 years Wednesday with hours of "misty, watercolor memories" -- for you in the under-40 crowd, that's Streisand singing "The Way We Were," in, ouch, 1973 -- it’s quite obvious that CBS knew it was not only getting one of America’s most famous journalists, but also one of America’s most liberal ones.

Katie Couric Goodbye Seen As 'Ridiculously Over the Top' 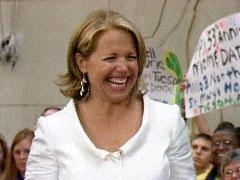 On the "Couric Watch" over at TVNewser, Brian Stelter noticed the early reviews for the looong Katie Couric goodbye on Wednesday were negative. Take B&C Beat at Broadcasting and Cable magazine:

But that isn't the story you want to paint if you're a big media operation like USA Today. Instead, you want to frame it like this:

Study: Global warming boosts poison ivy
WASHINGTON (AP) — Another reason to worry about global warming: more and itchier poison ivy. The noxious vine grows faster and bigger as carbon dioxide levels in the atmosphere rise, researchers report Monday... Compared to poison ivy grown in usual atmospheric conditions, those exposed to the extra-high carbon dioxide grew about three times larger — and produced more allergenic form of urushiol, scientists from Duke and Harvard University reported. "...the shift toward a more allergenic form of urushiol have important implications for the future health of both humans and forests," the study concludes.

There you have it. That means I can expect to get stricken with poison ivy three times more than I have in the past, which is currently a consistent zero times. This coupled with inch higher water must be part of the end of civilization that Al Gore anticipates. Remember, folks, all of this global warming nonsense you're reading about is just part of the 2008 Democratic platform as delivered by big media.

On Wednesday’s CBS Evening News, Anthony Mason trumpeted how North Carolina Treasurer Richard Moore, who got four soundbites, withheld that state’s pension fund votes from the ExxonMobil directors who he thinks gave too great a compensation package to the retired CEO, but Mason failed to identify his Democratic affiliation (not even on-screen) or let viewers in how CBS was delivering publicity benefitting a likely 2008 Democratic candidate for Governor of the Tar Heel state. The North Carolina Democratic Party was so excited by Moore’s move that they sent out a press release: “NC State Treasurer Richard Moore Takes on Oil Company.”

"Outside its annual shareholders meeting, ExxonMobil was under fire today from protesters frustrated with soaring gas prices and the company's former CEO," Mason touted before a woman protester outside the Dallas meeting charged: "He's one of the worst examples of corporate greed." After reciting ex-CEO Lee Raymond’s large compensation package, Mason noted that “ExxonMobil is the most profitable company in the country,” but “it's even starting to feel the heat here on Wall Street." For his evidence from “Wall Street,” Mason turned to Democrat Moore of Raleigh who declared: "I think the sentiment of disgust and outrage is very wide." Mason explained Moore’s power: “Richard Moore is North Carolina's state treasurer. The state's pension fund owns 11 million shares of ExxonMobil, worth more than $660 million. Today Moore, on behalf of the state, withheld all those share votes from the Exxon directors who backed Raymond's pay." Moore called the compensation package “un-American.” (Transcript follows)

Title Problems At The Los Angeles Times? Haditha Is "The Iraqi My Lai"

Forget the forthcoming report. Forget any trials. It appears that the Los Angeles Times has already reached its verdict on Haditha. The title of an editorial today (Wed. May 31, 2006) in the "print edition" at latimes.com is entitled, "What happened at the Iraqi My Lai?"

Have Media Made Hillary Clinton a Dead Candidate Walking?

As published at The American Thinker and read on air Wednesday by Rush Limbaugh:

For Hillary Clinton and her terminally unfaithful husband, last week must have seemed like a Wes Craven version of an old musical comedy reworked and entitled “A Ghastly Thing Happened on the Way Back to the White House.”

With Hillary leading in most polls as the prohibitive favorite to be the Democratic presidential nominee in 2008, many party loyalists and typically favorable media members appear to be jumping off her bandwagon. At the same time, these very folks are falling over themselves to assist in the makeover and revitalization of former vice president Al Gore.

Coincidence? Unlikely. In fact, this is starting to resemble what these same folks did to Howard Dean during his 2004 presidential run.

For those that have forgotten, Dean was riding high in the polls in the winter of 2004. However, few top-ranking Democrats believed that he could beat President Bush in November. As a result, Time and Newsweek both ran cover stories on January 12, 2004 questioning his “electability” beyond the primaries. As Eric Boehlert wrote in Salon on January 13:

By now I am sure you have heard of this incident between US Marines and Iraqi civilians in Haditha? It absolutely must be foremost in our minds that all the facts are not in. Still, the MSM are falling all over themselves saying that, when one of their own was killed by an IED and several more were injured, a squad of Marines lost their collective minds and murdered some two dozen Iraqi civilians.