Take heart, everyone: the NFL is changing. Football players these days are more tolerant, more willing to embrace social progress. They are moving in the direction of the country as a whole. Such were the conclusions reached by CBS’s Jim Axelrod.

In a segment aired one day before the Super Bowl on CBS Saturday Morning, Axelrod proudly told his audience that players’ attitudes toward gay marriage are evolving. Players like the 49ers’ Chris Culliver, who recently said a gay teammate would not be welcome in his locker room, are a dying breed. What’s more -- and this is apparently newsworthy to CBS -- football players are actually capable of disagreeing civilly and rationally about gay marriage. [View video after the jump. MP3 audio here.]

As an example, Axelrod cited Baltimore Ravens teammates Brendon Ayanbadejo and Matt Birk. The former supports gay marriage; the latter does not. Both players received ample screen time, but only Ayanbadejo was given a softball question that gave him a chance to take the moral high ground, at least as perceived by social liberals.

Axelrod inquired, “Is your generation of football player different than the generation or two that came before when it comes to human rights?” Ayanbadejo replied, “Oh, I mean, absolutely. I mean, the young guys now coming into the NFL are a lot more open-minded, a lot more progressive, and it’s an idea of where we’re going as a nation.”

So same-sex marriage is now a "human rights" issue. For his part, Birk is a pro-life advocate as well as defender of traditional marriage. Of course, you won't see Birk's advocacy for the unborn human being as a human rights matter.

With his opinion on the matter established, Axelrod spent the rest of the segment chatting with two other athletes who support gay marriage. One was Minnesota Vikings punter Chris Kluwe, who is “the NFL’s most outspoken proponent of same-sex marriage” according to Axelrod. Kluwe compared the gay marriage issue to segregation, slavery, and suffrage–the great civil rights struggles of the past.

Finally, Axelrod talked to former NBA player John Amaechi, who came out as gay after his retirement. Axelrod prodded him: “Are we seeing the beginning of a new era where athletes will begin to be more vocal about social issues?” Amaechi replied that he won’t be satisfied until many more athletes speak out in favor of gay marriage: “Unfortunately, the fact that we can talk about Chris Kluwe, the fact that his name is not drowned in a list of heroes shows that we aren't there yet, because where are the rest of them?”

If CBS has its way, perhaps Kluwe’s name will soon drown in a list of “heroes.” 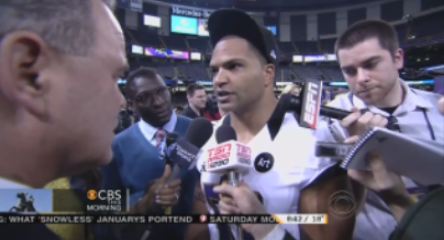 JIM AXELROD: Good morning. Good to be here. [Chris] Culliver's remarks may have come as little surprise to people who have a certain image of the hyper-macho, alpha-male world of professional football. Not exactly known for being on the cutting edge of social change, but that image is outdated, judging from the way the issue was handled this season in the locker room of the 49ers’ opponents.

AXELROD: Off the field, well, that's a much different story.

MATT BIRK: Brendan and I couldn't disagree more on that issue.

AXELROD: That issue is same-sex marriage. Both men are straight, both have children. Ayanbadejo supports the idea.


AYANBADEJO: Now it's time for gay rights and we're going to get that straight.

AXELROD: Birk does not.

BIRK: I believe that marriage should be between one man and one woman.

AXELROD: Last fall, when Maryland had a gay marriage referendum on the ballot, both decided to speak out.

AXELROD: They agree the way they disagree, civilly and rationally, kept the issue from being divisive in the locker room.

BIRK: I don’t know if people are surprised that because we're football players that we could have a civilized discussion or a civilized disagreement, but that's just the way it worked out.

AXELROD: Ayanbadejo goes further, that simply having the debate at all illuminates a change being felt league-wide.

AXELROD (on-camera): Is your generation of football player different than the generation or two that came before when it comes to human rights?

AYANBADEJO: Oh, I mean, absolutely. I mean, the young guys now coming into the NFL are a lot more open-minded, a lot more progressive, and it’s an idea of where we’re going as a nation.

AXELROD: So this isn’t your father’s NFL.

CHRIS KLUWE: No, no, not anymore.

AXELROD (voiceover): Minnesota Vikings punter Chris Kluwe is married, has two kids and is the NFL's most outspoken proponent of same-sex marriage.

KLUWE: I think it's the same–the same struggle that we've had with segregation, with slavery, with suffrage, all the civil rights struggles where one group is trying to tell another group how to live their life.

AXELROD (on-camera): Has anybody come up to you and said, why don't you keep your mouth shut?

KLUWE: Nope, haven’t had that. It's been very respectful, and I think part of that also comes down to the fact that guys in the locker room realize that we are there to win football games. At the end of the day, I don’t get paid for making political statements; I get paid to punt.

JOHN AMAECHI: I think now what we're seeing is a new stridence inside of young people-- young athletes who are saying, you know what? It's not enough, it’s not enough to be neutral. At some point as a person of great power and influence as an athlete, you either stand for equality or you don't.

AXELROD: Four years after retiring from professional basketball, Amaechi became the first player to publicly come out. While the Kluwes and Ayanbadejos leave him hopeful about changing attitudes in the world of pro sports, the pace of change keeps his optimism guarded.

AMAECHI: I think a decade ago there were serious conversations about race happening in locker rooms in the NBA. Homophobia, not so much.

AXELROD (on-camera): Are we seeing the beginning of a new era where athletes will begin to be more vocal about social issues?

AMAECHI: I would like to believe that it's true. Unfortunately, the fact that we can talk about Chris Kluwe, the fact that his name is not drowned in a list of heroes shows that we aren't there yet because where are the rest of them? If you're interested in social justice, you can't pick and choose which parts of social justice interest you.