Some Cinematic Satires of Chris Matthews for the April Fools N.Q.

Edited out of the two-page opus of little ersatz Notable Quotables for April Fools Day were two entries satirizing Chris Matthews and his tendency to burp movie citations about every five minutes of "Hardball." Geoff Dickens, who is the official watcher of "Hardball," weaved real MSNBC sentences with imagined ones:

Rich Noyes suggested the other day that one reason Likud and the Israeli right wing was crushed at the polls was some old-fashioned liberal media bias. Perhaps. But my old friend Joel Rosenberg (best-selling fiction writer) blogs about his dinner table at the Radio and TV News Correspondents dinner, and how he explained the Israeli election returns. I thought: hmm, no wonder we haven't had a lot of reporting from Israel on American TV. Things are pretty good:

April 1 Edition of Notable Quotables Is Up

Wow, these quotes are hard to believe, aren't they?

Dan Gainor reports to me that the Norwegian paper Aftenposten noted that a "comedian" named Otto Jespersen took to his TV show to burn pages of the Old Testament, and riots did not ensue:

The burly, middle-aged Norwegian seems to have a thing for fires: He's perhaps best known for an American flag-burning stunt on national TV three years ago, to protest the US-led invasion of Iraq. 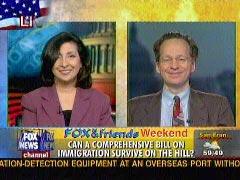 Regular readers of this column know the delight that has been taken in skewering Ellen Ratner for her loopy liberalism, as here, here and here.

Brian Stelter at TV Newser broke the story Friday that "Good Morning America Weekend executive producer John Green has been suspended for one month after his personal e-mails were leaked to the Drudge Report and Page Six, TVNewser has learned. Phyllis McGrady made the announcement at GMA's morning meeting today. A number of ABC News staffers are outraged that Green's personal messages have become a public embarrassment.

A member of Democratic Underground sent Helen Thomas flowers, honoring her for "asking the President the questions all Americans want answered about Iraq!" 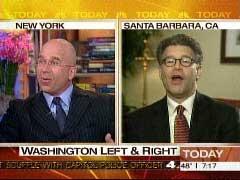 A very tired and very cranky Al Franken appeared on the March 31 edition of the Today show.

A small-time member of Canada's parliament made headlines today by sending out and later retracting a column which called for jail time for reporters who "fabricate stories, or twist information and even falsely accuse citizens."

Colin Mayes, a Conservative from British Columbia, issued his remarks in a column sent out to newspapers in his district.

In my latest article up at FreeMarketProject.org, I take a look at some movie reviews which praise Ice Age 2: The Meltdown for raising the concept of global warming to kids. You can find it here.

On the March 27th edition of his Fox News syndicated program Geraldo At Large, Geraldo Rivera let loose on the Minutemen and other opponents of illegal immigration. During the final commentary portion of the show Rivera's slam included some violent imagery:

Tony Blair: Terrorists "Play Our Own Media With A Shrewdness" Pols Would Envy

Investor's Business Daily reprints (this is at least the second time) British Prime Minister Tony Blair's March 21 speech at the Foreign Policy Center in London. See the whole thing at Real Clear Politics. This part about the media's characterization of insurgent attacks as coalition setbacks and not contemptible violence against innocents jumped out at me:

Hispanic Journalists Group Protests Use of "Illegal" In Immigration Stories

The National Association of Hispanic Journalists is using the recent spate of immigration protests to remind their media bosses that it's very insensitive -- and inaccurate? -- to describe undocumented immigrants as "illegal aliens."