By Greg Sheffield | March 21, 2006 2:24 PM EST
The Washington Post's liberal readers have been so spoiled by the paper's liberal bias that they were outraged when the Post decided to hire a conservative blogger.

The Post launched a new blog called Red America, and it is run by Ben Domenech, who co-founded RedState.com.

Saddam's Trial: A Major Accomplishment the MSM Don't Seem to Care About 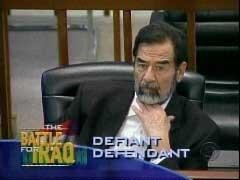 Toppling Saddam Hussein’s brutal regime and bringing the brutal dictator before a court of law is unquestionably a major achievement of the U.S. and our allies. But TV coverage has minimized the historic significance of this case. Instead, the network’s Iraq news has been a depressingly dour drumbeat of terrorist attacks, U.S.

The New York Times: Hamas a Terrorist Group or a “Terrorist” Group?

Today: Sympathetic Report on Polygamy, The “Next Civil Rights Battle”

By Ken Shepherd | March 21, 2006 10:31 AM EST
As millions of college students enjoy spring break, a respected employment firm gave them an early graduation gift: a report showing that the class of 2006 faces the best labor market in five years. But while the media frequently relay reports from Challenger, Gray, and Christmas, the new report has largely been ignored in the media. Reuters news wire reported on March 20: 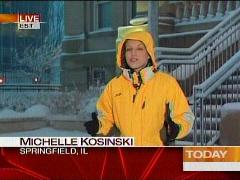 I will always have a soft spot for NBC reporter Michelle Kosinski. After all, it was Michelle's Canoe-Gate stunt that got my NewsBusters career off to a nice start. Michelle was back on the weather beat on this morning's Today show. And once again she made a weather-related allegation that strained credulity.

Laura in the Lions Den, Carville Advises W to Talk About Failure

Was it David Gregory, or an SNL parody of a biased liberal MSMer? The topic on this morning's Today show was whether media coverage of Iraq has presented a distorted picture. Under the circumstances, you might have thought Gregory would have feigned some facsimile of fairness. But his very first question to James Carville advanced the theory that . . . President Bush is a liar.

Asked Gregory: "Is the problem for this president and top administration officials that the public doesn't believe what they say anymore?"

Like a top point guard, Laura Ingraham tenaciously fought through the Gregory-Carville double-team to make her case. She pointed out that NBC and the Today show expended huge resources to cover the Olympics and even to answer the question "Where in the World is Matt Lauer?" She suggested that they devote some of the same resources to broadcast the Today show directly from Iraq, that they accompany troops, speak with US and Iraqi military personnel and with villagers and see the reality on the ground.

Today’s “Bush Concedes Setbacks” piece in the NYT by Elisabeth Bumiller contains questionable passages that give her “angle” away.

Here is a slice seemingly right off the editorial page:

WashPost Hails Leftist Harper's Editor, Even As They Doubt His Veracity

Washington Post magazine-beat writer Peter Carlson writes an admiring profile of Harper's magazine editor Lewis Lapham in the Style section today, headlined "Lewis Lapham Lights Up," as Lapham prepares to step down as Harper's editor. The man is a raving leftist, and while Carlson notes his cover story in the March issue is "The Case for Impeachment," he never quite locates Lapham on the far left. He merely lets friend Tom Wolfe call him "left-leaning."

Appearing as a guest on tonight's episode of the O'Reilly Factor (Mon. 3/20/06), Medea Benjamin, a cofounder of the far-left group Code Pink, made the claim that "North Korea does not have a nuclear weapon." An overwhelming mountain of evidence suggests otherwise.

On Third Anniversary of Iraq War, ABC Allows Some Hope But NBC All Negative

Asked to provide an assessment of life is for ordinary Iraqis on the third anniversary of the start of the war, on Monday's ABC's World News Tonight and NBC Nightly News, Dan Harris and Richard Engel provided different pictures. ABC's Harris conveyed more bad than good, but acknowledged some hope expressed by an Iraqi family. NBC's Engel, however, stuck exclusively to the negative. “Iraqis today show a range of complex, competing emotions,” Harris relayed as he profiled a family in which “the question of whether Iraq is better off three years later provokes debate” with the 15-year-old daughter pleased that “toppling the regime made Iraq free.” After relating how a man in a long gas line maintained such a line “never would have happened under Saddam,” Harris pressed him: “Would you really rather have Saddam back, or long gas lines? 'We don't want Saddam. But we need a better economy and more security.'” Harris concluded with how the family expresses “the same, seemingly contradictory emotions, so common in Iraq today. They sometimes miss the days of Saddam, but don't want him back. They want the Americans to get out, but just not yet.”

A more dire Engel began with how “since the U.S. invasion, there has not been a single day without mortar fire, car bombings, or IED attacks. This is not the world Afrah wanted to bring her daughter into.” Engel highlighted how callers to a radio show “complain about kidnapings, police death squads and murders between Sunnis and Shiites." He concluded with how one man told him that “when he leaves his house in the morning...he tells his family he might not see them again." Engel proceeded to tell anchor Campbell Brown about how “my closest Iraqi friend” thinks “his country is now lost." (Transcripts follow.)

CNN's Schneider on Feingold's Censure Motion: Why Not Impeachment?

To paraphrase that famous George Santayana phrase, perhaps political reporters who highlight liberal efforts to embarrass the President on Friday are destined to find those same moves inadequate on Monday. Having awarded liberal Wisconsin Senator Russ Feingold with the "political play of the week" for his motion to censure President Bush on the March 17 The Situation Room, CNN senior political analyst Bill Schneider during today’s 4pm hour wondered why the senator isn’t proposing impeachment.

Bill Schneider: "Wolf, the philosopher George Santayana wrote those who cannot remember the past are condemned to repeat it. But sometimes that happens with those who remember the past all too well. Senator Russ Feingold’s motion to censure President Bush raises a question. If he believes the President broke the law, why isn’t the senator proposing impeachment?"

By Greg Sheffield | March 20, 2006 5:38 PM EST
With all the criticism heaped upon it by bloggers, including NewsBusters' very own Clay Waters, the New York Times has finally decided to do a story about bias..... That is, bias by Amazon.com.