Stand Up Guy: In Today Show Interview, W Quick on Feet on Katrina, Less So on Miers 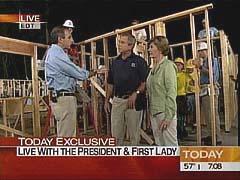 If you invite the chubby kid from down the block to the birthday party, is it fair to criticize him for eating cake?

Uh ... Should the Secret Service be looking into this?

Check out this ad that was found at the top of the Drudge Report the other night (Sunday, October 9, 2005):

"Punch out George W"?? Isn't any kind of violence against the President, whether real, imaginary, or implied, a crime? (I'm asking.)

CBS Off Track With NASCAR Comments

Even when journalists try, they just don’t understand Middle America. CBS proved the point with a story on the multi-billion dollar business of NASCAR. Even in a story made possible by the enormous success of the sport, CBS’s “60 Minutes” depicted racing promotions as “hucksterism” and advertisers as “not wholesome” while the product itself was portrayed as an “good ol’ boy Southern Confederate flag sport” hostile to minorities.

On yesterday's The Situation Room, Jack Cafferty made an over the top statement comparing the upcoming Miers confirmation hearings to a train derailment.

Wolf: James Dobson's claims about Harriet Miers making it into the Cafferty File today. Jack is in New York, and he's smiling, as only Jack can do.

Jack Cafferty: I love this. I mean, I...this is just going to be one of the great shows, unless she backs away, one of the great shows we've seen in a while. If the Miers nomination to be a Supreme Court justice wasn't in trouble before, it is now. And by the way, it was in big trouble before. With evangelical leader Dobson hinting he might have secret information about Miers' views on such issues as abortion, and with his acknowledgment that he talked with Karl Rove at the White House about her nomination, Miers' opponents have been handed a loaded gun. Even if Dobson is called before the Senate Judiciary Committee and actually testifies, there'll always be a suspicion that we're not getting the whole story on her. Nevertheless, all that being said, I can't wait for the hearing. I mean, I wish they'd start this afternoon. Here's the question. Should evangelical leader James Dobson have to testify, be subpoenaed and be forced to testify at Harriet Miers' confirmation hearings...I hope he does. And I hope she does, and I just...I mean, I just can't wait. This is going to be a dream for people like me.

WB: You might have to wait until early December for those hearings, though, Jack.

Jack Cafferty: Yeah, but I mean, you know, this is going to be like watching those super trains that go from the Tokyo airport into downtown Tokyo, go off the tracks at maximum speed. I mean, you just won't see anything better than that.

So let me get this straight .. the pain, suffering, and death of hundreds of people is equal to the Judiciary Committee's questioning of Harriet Miers? Jack never ceases to amaze me.

After Monday's CBS Evening News showed a clip of a Marine recruit at Parris Island explaining that he volunteered because “I want to be fighting the evils that did what they did to us on September 11th," reporter Sharyn Alfonsi related how “all three of the recruits we sat down with say they enlisted because of September 11th.” Alfonsi, however, couldn't let such an apparent link between 9/11 and the war in Iraq go unchallenged and so she quickly admonished the naive recruits as she stressed how “politicians will argue whether the war and 9/11 are related” -- though she added that “clearly here, to these recruits, the two are inseparable."

Alfonsi's clarification about 9/11 connections came in an otherwise very positive story about three Marine recruits and their disappointment that more Americans are not closely following the war. Her piece was the first of a new series, “CBS News Road Tour: The Home Front,” which will take Alfonsi and her mini-van to Ft. Benning in Georgia on Tuesday. Full transcript follows.

An article in today’s New York Times depicted a grim picture of the future of America’s newspaper industry. Stung by declining circulation rates, most of the nation’s major dailies are laying people off:

“Such rethinking is sweeping newsrooms across the country as the industry faces a wave of job cuts, among them 700 announced since May at The New York Times Company, including its business operations and the various media properties it owns, and 14 at The Hartford Courant. Most recently cuts have been announced at The Boston Globe (a division of the Times Company), The San Jose Mercury News, The Philadelphia Daily News, The Baltimore Sun and Newsday, and over the last few years The Los Angeles Times, The Wall Street Journal and The Washington Post have also moved to eliminate jobs.

“Industrywide, ad revenue is flat, costs are up and circulation is eroding.”

The article went on to discuss how ad revenues at the major newspapers have stopped growing as major retailers have refocused their marketing dollars into other channels such as cable television and, of course, the Internet:

New York Magazine: Dan Rather May Have Doubted Memos All Along?

New York magazine reports that Dan Rather may have doubted the Memogate story all along, or least professed his doubts once his credibility went south:

By Joshua Sharf | October 10, 2005 4:35 PM EDT
For the Denver Post, First Amendment protections apparently are "loopholes" to be examined. In an article about free speech campaign finance restrictions, the Post focuses on conservative groups' efforts, while biasing the article in favor of such restrictions in general. (This isn't the first site to notice the - oddity - of the state Democrats becoming concerned about the new campaign finance laws just as the Republicans begin to figure them out.

On PBS, Jim Lehrer Puts Justice Souter on the "So-Called Liberal Wing" of the Court

What follows is a brief exchange from Friday's edition of the PBS NewsHour, during a discussion with liberal columnist Mark Shields and conservative New York Times columnist

Kitty Kelley Continues to Heap Scorn on the Bush Family

The New York Times ran an op-ed this morning by controversial biographer Kitty Kelley. As the subject matter was George W. Bush, it should not be surprising that this article had nothing positive to say about the president:

“SECRECY has been perhaps the most consistent trait of the George W. Bush presidency. Whether it involves refusing to provide the names of oil executives who advised Vice President Dick Cheney on energy policy, prohibiting photographs of flag-draped coffins returning from Iraq, or forbidding the release of files pertaining to Chief Justice John Roberts's tenure in the Justice Department, President Bush seems determined to control what the public is permitted to know. And he has been spectacularly effective, making Richard Nixon look almost transparent.”

At issue this morning is an executive order that Bush signed in November 2001 concerning the release of any former president’s private papers. Kelley sees this as another sinister move by the president:

Only on fantasy television would anyone predict the New York Times would endorse a Republican presidential candidate, but that's what occurred on Sunday's episode of NBC's drama, The West Wing. On the October 9 show, the GOP nominee, California Senator “Arnie Vinick” (played by Alan Alda), lays out a series of proposals on immigration (such as doubling the border patrol), aimed to put his Hispanic Democratic opponent, Congressman “Matt Santos” (played by Jimmy Smits), in a box. In one scene, “Vinick” campaign advisor “Bruno Gianelli” (played by Ron Silver), a former campaign adviser to Democrats including the show's “President Bartlet,” walks into a meeting and declares: “The New York Times loves your guest worker program. Think we might have a shot at an endorsement." At least another campaign staffer points out the naivete of the Democratic operative who has switched sides: "Kiss of death for a conservative." But another adds: "New York has 31 electoral votes."

Liberal commentator Lawrence O'Donnell serves as Executive Producer of the series and Sunday's episode also featured "Vinick," who is Hollywood's dream of a Republican who is “pro-choice,” pro-minimum wage, environmentalist and anti-religious right, going on a rant against the head of the "American Christian Assembly." Vinick asserts: "Tell that lying little creep the United States Senate gets to advise and consent on judges, not the clergy." More on that scene, and links to past NewsBusters and MRC CyberAlert items on the liberal advocacy in the series, follows.

Regardless of all the carping and whining over hurricane-related contracts going to Halliburton and Shaw Group due to potential ties to the Bush administration, as well as some of the awards being “no-bid,” there seems to be no such outrage if a company has ties to former President Clinton’s administration.

WashPost Mangles the Correction of "Novice Protester" Hoax: It's Not "Incorrect"?

Last month, I noticed after a few seconds of Googling that "novice protester" Patrice Cuddy of Kansas, highlighted by Washington Post reporter Petula Dvorak, was not a novice at all, and could be easily found marching against the war before it even began in 2003.

By Greg Sheffield | October 10, 2005 7:17 AM EDT
Near the farmhouse, the foxes will hold a panel discussion on the phenomena of hens going missing from the henhouse.

This Aesop-like fable will be played out next week on Oct. 17 at the National Press Club in Washington, when the Michigan State University school of journalism holds a "media bias symposium."

The event is also sponsored by the Newseum, the Poynter Institute, and the National Press Club.