As reported by NewsBusters here, the media’s current fascination with Rep. John Murtha (D-Pennsylvania) completely ignores the decade of the ’90s when the congressman was a leading pork-barrel spender. Yet, maybe more curious, this love affair is thoroughly dismissing some rather recent earmarking that made the papers before Mr. Murtha became the media’s favorite anti-war spokesman.

WashPost's Dana Milbank Even Gets Snarky With Popes

Dana Milbank's snarky "Washington Sketch" column in the Washington Post Tuesday employs a bad, even mildly offensive, analogy in comparing Bush and Cheney to the last two Popes: "As vice president, Cheney has always played the hard-line Cardinal Ratzinger to Bush's sunny John Paul II. Before the war, Cheney asserted that Iraq had 'reconstituted nuclear weapons.' Since the invasion, he has gone further than others in the administration in asserting Iraq's ties to the Sept.

Another example of network journalists creating their own self-fulfilling story. On Tuesday's NBC Nightly News, anchor Brian Williams set up a full story on how President Bush has returned to his Texas ranch “after an overseas trip that was not supposed to be about Iraq, but that topic ended up following him all the way around the world.” As if reporters, who were the ones posing the questions to him about Iraq and making it a topic on their newscasts, had nothing to do with it! Then, over video of Bush trying to open the closed doors in China, David Gregory opened his piece by finding deep meaning in the minor incident: “The President's botched exit from an impromptu press conference spoke volumes about this latest trip abroad." Gregory proceeded to act as if reporters were mere observers when they were directly responsible for imposing their news agenda: "All this month, from Latin America to Asia, foreign travel has provided Mr. Bush no escape from his political troubles. In Argentina, trade talks collapsed overshadowed by anti-America protests and persistent questions about Karl Rove and the CIA leak investigation." (Full transcript follows.)

On November 4, the night of Bush's press conference in Argentina, a NewsBusters item recounted how “the broadcast networks...treated as of great import how President Bush was 'dogged' at the Summit of the Americas in Argentina, with questions about Karl Rove and the CIA leak matter -- a self-fulfilling agenda since those questions were posed by reporters from the Washington press corps. In short, the media made its agenda the news and then marveled over it.” NBC's “Brian Williams stressed how Bush's 'political troubles following him to Argentina from faraway Washington.' Kelly O'Donnell zeroed in on how Bush's 'domestic woes came along, too' with 'four of five' press conference 'questions related to the political fallout from the CIA leak case.'”

Media Matters and the blog Daily Kos are among two liberal mouthpieces who look to be on a slippery campaign to rewrite one of the more ugly episodes in recent memory for Democrats.

GM Coverage in MSM Ignores the Impact of Unions

General Motors has had its share of trials lately – renegotiating worker benefits and now closing plants. The media continue to blame the auto manufacturer’s worries on high gas prices and foreign automakers. The glaring omission in the coverage is the United Auto Workers, the union that has driven GM’s costs to unsustainable heights.

The BBC has a funny view of international law - make sure the obligations fall on Israel.

Hizbullah launched a failed attempt to kidnap soldiers Monday in an assault on Mount Dov and the northern town of Rajar and a coordinated mortar and rocket barrage on northern Galilee towns and kibbutzim.

By Ken Shepherd | November 22, 2005 2:00 PM EST
No balance presented in Lou Dobbs Tonight story about 'War on the Middle Class'

It may not get much play in the MSM, but the Catalogue for Philanthropy's latest National Generosity Index finds a clear majority of the most generous states are in the Bible Belt where evangelical Christianity is strongest and household income is lowest. The least generous states are mostly in areas in which evangelicals are least common, but household incomes are highest.

Several times over the past few weeks, Katie Couric has used her Today show to push the idea that the United States is now a country that abuses human rights. But this morning’s Today saw a dead human corpse, stripped of his skin and with his skull removed, located just a few feet from where Katie was sitting next to co-host Matt Lauer on the couch.

The corpse was from a traveling exhibit on human bodies, where the preserved remains are dissected to show different aspects of human anatomy. But according to Friday’s New York Times, human rights groups are extremely concerned that the bodies on this exhibit — presumably including the one that showed up on Today’s set — could be dissidents executed by China’s communist regime:

Balancing Out Farewell Praise for Koppel With Examples of Bias

Ted Koppel closes up shop on "Nightline" tonight. He will be widely revered and remembered as a voice for hard news and serious long-form reporting. Several decades ago, Koppel’s format was even welcomed by conservatives at the time as a place to be heard for more than six seconds. ("The MacNeil-Lehrer NewsHour" was another. Both were biased at times, but offered some space to be heard.) But Koppel also has a record with some serious (sometimes atrocious) liberal bias. 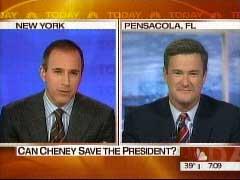 Like Roger Clemens choosing to float one at 68 MPH, do MSMers intentionally toss in the occasional change-up just to keep us critics off balance?

The show was Today, the host Matt Lauer, the guest Joe Scarborough, the topic Iraq, and the on-screen graphic at its biased worst: "VP on the Attack; Can Cheney Save the President?"

But suddenly, Matt tossed in two knuckle balls, and from right field at that.

Left-wing media bias certainly isn't a problem restricted only to the United States. According to the London Guardian, one of France's top TV bosses admitted earlier this month that his network deliberately refrained from showing burning cars in its coverage of France's domestic rioting for fear that doing so would help "right-wing" political parties.

One of France's leading TV news executives has admitted censoring his coverage of the riots in the country for fear of encouraging support for far-right politicians.

Jean-Claude Dassier, the director general of the rolling news service LCI, said the prominence given to the rioters on international news networks had been "excessive" and could even be fanning the flames of the violence. [...]

"Politics in France is heading to the right and I don't want rightwing politicians back in second, or even first place because we showed burning cars on television," Mr Dassier told an audience of broadcasters at the News Xchange conference in Amsterdam today. 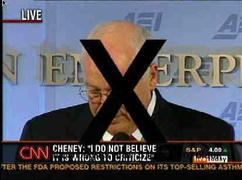 On Monday, during Vice President Dick Cheney's speech which was being broadcast live over CNN, a large black "X" was repeatedly flashed over the Vice President (h/t Drudge).

Voices on the War

By Tom Segel | November 22, 2005 12:19 AM EST
An Associated Press article dated Saturday, November 19, 2005, quotes Representative John P. Murtha (D-PA) as saying “Our troops have become the enemy. We need a change of direction in Iraq.” The article went on to report that his “call a day earlier for pulling out troops sparked a nasty, personal debate over the war.”