Why No Outrage Over New Orleans Mayor’s “Overrun By Mexican Workers” Remark?

At a town hall meeting with small business owners, Mayor Ray Nagin said on camera: “How do I make sure that New Orleans is not overrun by Mexican workers?”

Media Forget History of American Constitution When Reporting on Iraq's

For two days, all parts of the American press have been reporting a "constitutional compromise" which has "gained the support of a main Sunni political party." With this compromise, it is expected that upwards of half the Sunnis (a 20% minority in Iraq) will support its new Constitution, and it will be ratified in the vote on Saturday.

All well and good. But hasn't anyone in the press recalled certain adventures of James Madison? (He was in all the papers.) We in the United States have been through exactly the same process. But NO ONE in the American press has, so far, remembered and mentioned that fact.

There was a bitter fight between the Federalists and Anti-Federalists in Philadelphia in 1787, whether we would have a new Constitution. And if so, what would be the powers of the new federal government. When the Constitution was submitted to Congress for its review, and afterwards to the states for their ratification, that same fight spilled out to the state capitols.

The Absurdity of Dana Milbank and Bush's Body Language

Describing a brief interview NBC's Matt Lauer had with President Bush and the First Lady in front of a Habitat for Humanity construction project yesterday, The Washington Post's Dana Milbank was so obsessed with the President's body language that everything else he wrote about the interview got lost in his frenzied descriptions. For instance, regarding a question about prosecutors' interest in Rove, Milbank described the President's response as:

Media Wont Rest until Taxes Are Raised
Were fighting terrorists. Were rebuilding the Gulf Coast. Can we do all this without tax increases? is the media refrain. In post-Katrina tax coverage, 59 percent of network news stories suggested raising taxes. They turned to everyone from Bill Clinton to the man on the street make the case.

By | October 12, 2005 2:00 PM EDT
Networks flood airwaves with stories suggesting tax hikes to pay for Katrina and other price tags.

By Clay Waters | October 12, 2005 11:48 AM EDT
The New York Times breaks its weird silence on reporter Judy Miller, with David Johnston's article (a page A16 piece that lacks even a front-page blurb) marking her testimony today to the grand jury investigating the leak of Valerie Plame's name.

By Greg Sheffield | October 12, 2005 10:29 AM EDT
When Media Matters took out of context a statement Bill Bennett made on his radio show, the mainstream media were more than willing to comply and show outrage over his remarks.

But another radio host made comments even more explosive, and even elicited a response from the Jewish Anti-Defamation League. The book by disgraced former CBS producer Mary Mapes, Truth and Duty : The Press, the President, and the Privilege of Power, has finally been put back on Amazon.com. But this time the excerpt from the book has been removed.

Actor Woody Harrelson, appearing on Tuesday’s Late Show with David Letterman, denounced “this oil-garchy that calls itself our executive branch” and complained about the “petrochemical industry taking over the world." Then viewers saw a clip of him playing a lawyer in a new movie, North Country, in which his character paints Anita Hill as a maligned victim as he warns a sexual harassment victim about how she’ll be characterized in court as a “nut” or a “slut” since “right has nothing to do with the real world. Look at Anita Hill, because she's you.” That movie, opening next week, is based on a book by former Newsweek White House reporter Clara Bingham, Class Action: The Story of Lois Jenson and the Landmark Case that Changed Sexual Harassment Law.

The Internet Movie Database's plot summary for the film: "A fictionalized account of the first major successful sexual harassment case in the United States -- Jenson vs. Eveleth Mines, where a woman who endured a range of abuse while working as a miner filed and won the landmark 1984 lawsuit." That would place the lawsuit filing seven years before anyone heard of Anita Hill. (More of what Harrelson told Letterman follows.)

Couric: Breaking The Law Is "The Way This White House Possibly Operates"

Does the MSM sense blood in the Bush administration water? That seems to be the case, judging from the breathtaking accusation that Katie Couric just leveled at it.

The context was Couric's interview of Chris Matthews on the subject of the investigation by special prosecutor Patrick Fitzgerald into possible leaks in the Valerie Plame affair.

At Get Religion, Terry Mattingly notes that Gov. Jeb Bush is catching flak from the atheist lobby for encouraging Florida children to read "The Lion, The Witch, and The Wardrobe." Barry Lynn of Americans United for the Separation of Church and State is typically wheezing over anyone encouraging stories with Christian metaphors. (Actually, Lynn's claiming C.S.

Remember all those media predictions about the toxic nature of the floodwaters in New Orleans caused by Hurricane Katrina?  Well, it appears that much like their prognostications of casualties, how long it was going to take to drain the city, and the likely devastation to America’s economy, this too was an extraordinary exaggeration.

Here’s a sampling of the press opinions concerning this water made shortly after Katrina hit:

On Tuesday's Today, Matt Lauer interviewed President Bush and First Lady Laura Bush at a house building zone for those who were affected by Katrina to live in, in which the President is contributing too. Lauer immediately accused Bush of using this as a photo-op situation.

Anti-War, or Patriotism At Its Finest? 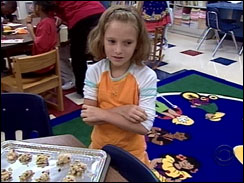 Sharyn Alfonsi did a story on “The CBS Evening News” tonight that brought me to tears.  Now, I don’t know whether the intention was to stoke anti-war sentiment, or just to show how children at Fort Benning, Georgia are coping with their parents being deployed to Iraq.