Apparently, the AP doesn't think that illegal immigrants are breaking the law:

More than 50,000 people gathered downtown Saturday as part of a national protest against a crackdown in immigration laws, including federal legislation aimed at criminalizing illegal immigrants and building more walls along the U.S.-Mexico border. (emphasis added -ed.) 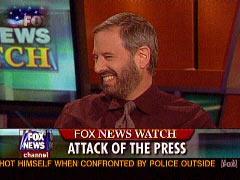 Is Neal Gabler jealous of Helen Thomas' status as a leading Bush media antagonist? You might think so, judging by the barbs Gabler aimed Thomas' way on this evening's Fox News Watch.

Is Tyrus Thomas amazing or what?

Here's your chance to talk hoops on Elite Eight weekend with your fellow NBers.

Today’s Washington Post provided an ideal example of news priorities in the mainstream media. Howard Kurtz’s piece on the resignation of Ben Domenech, “Post.com Blogger Quits Amid Furor,” earned a spot on the front page of the Style section.

Mark Steyn: Reality in Iraq is “Very Different From What Tim Russert Thinks”

For those of you that missed it, Mark Steyn – one of the finest geopolitical writers on the current landscape – was Hugh Hewitt’s radio guest on Thursday (hat tips to Radio Blogger and Real Clear Politics with audio link to follow). The main topic of discussion was – you guessed it – mainstream media bias towards the war in Iraq. One of the best moments was when Steyn went after one of the most prominent media darlings:

Steyn stated the main problem with the press coverage from the Middle East is the “herd think” mentality that emanates when these representatives all get together at bars and social gatherings to, intentionally or not, develop a consensus view:

Washington Post: Impeachment "Talk Bubbles Up in Many Corners of the Nation"

Saturday's Washington Post front page featured the Michael Powell story, "Near Paul Revere Country, Anti-Bush Cries Get Louder." The article begins by noting that three of the ten Massachusetts congressmen have called for an investigation and possible impeachment of President Bush.

It's not surprising Andrea Mitchell found the best angle on the Abdul Rahman case was the another-problem-for-Bush angle. (Isn't that always their favorite angle?) My friend Cam Edwards trekked to the Afghan embassy protest, and reports the NBC producer on the scene was there, and intensely interested in getting anti-Bush soundbites: 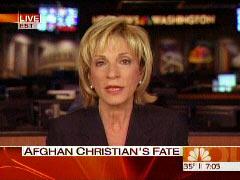 Where is the liberal moral outrage? Oh, to be sure, the left is making its political points in the wake of the case in which a man is facing the death penalty in Aghanistan for having converted from Islam to Christianity. Story here. Administration critics have been quick to question the value of Pres.

In a little half-hour online chat Friday at Washingtonpost.com, WashPost columnist/reporter David Broder complained about the "fiscal profligacy" of the federal government, but specifically against the Bush tax cuts. He sounded the familiar refrain that Americans should be having to "sacrifice" more for the war, even as his questioners pointed out tax cuts are popular.

Bill Maher ended his HBO show Friday night, Real Time with Bill Maher, with a tirade about supposed efforts by the Bush administration to suppress information about global warming. Picking up on the allegations of NASA's James Hansen who was featured on last Sunday's 60 Minutes, Maher charged that “cowboy” Bush “and his corporate goons at the White House tried to censor Mr. Hansen from delivering” the message that carbon dioxide emissions must be reduced within ten years or a disastrous “tipping point” will be reached. Maher then quipped: “This from the crowd that rushed into a war based on an article in The Weekly Standard.” Yes, Hansen was “censored” -- right onto the platform of an entire 60 Minutes segment devoted to his apocalyptic theories.

Maher proceeded to level a serious accusation: “Failing to warn the citizens of a looming weapon of mass destruction -- and that's what global warming is -- in order to protect oil company profits, well that fits for me the definition of treason.” Maher nefariously concluded: “We are letting dying men kill our planet for cash and they're counting on us being too greedy or distracted, or just plain lazy, to stop them. So on this day, the 17th anniversary of the Exxon Valdez oil spill, let us pause to consider how close we are to making ourselves fossils from the fossil fuels we extract.” (Transcript follows.)

Chris Matthews Suggests That Bush and Cheney Are Liars

Chris Matthews was on “Imus in the Morning” Friday (hat tip to Crooks and Liars), and he went on quite a rant about the Bush administration (video link to follow). From suggesting that Helen Thomas was set up earlier in the week to intentionally be toyed with by President Bush, to alleging that Bush and Vice President Cheney both lied about Iraq having ties to al Qaeda in order to sell the war, Matthews was in rare form. Unfortunately, in his rant, Matthews made a number of false statements. For instance (rough transcript):

“Well I am just going to stick to this point that the president led us in there with the background music of American culture. Everybody was led to believe that we were getting payback, we were avenging what happened on 9/11 and that we are going to get them. Vice President Cheney said we are going to attack terrorism at its base. Over and over the language was, “this is where it came from.” In fact most recently the President suggested that it was always the hot pursuit, like a New York police chase, “we chased them back into their country.” “We pursued the terrorists back to Iraq” and it's all nonsense. The reason there are terrorists in Iraq today like Zarqawi is we created the opening by blowing the country apart.”

Well, that’s not actually true, is it Chris? It is widely accepted that Zarqawi moved to the northern section of Iraq in the summer of 2002 where he joined the Islamist Ansar al-Islam group. This was nine months before we invaded, Chris. However, after these material misstatements, Matthews then basically called the administration a bunch of liars:

For those of you that missed it, there was a fabulous exchange that occurred during a Pentagon press conference between Defense Secretary Donald Rumsfeld and CNN’s Jamie McIntyre aired on “The Situation Room” Thursday (video link to follow). McIntyre was questioning Rumsfeld about recent claims of him being “embattled,” “incompetent,” and that he should step down.

Rumsfeld answered McIntyre with tongue firmly pressed against his cheek:

“You like to repeat all that stuff, don't you. On camera? (Turning to cameraman) Did you get that? Let's make sure you got it. He loves that stuff. It's a sure way to get on camera. He'll be on the evening news.”

McIntyre also referred to a recent op-ed by New York Times Diva of the Smart Set Maureen Dowd wherein she wrote that Rumsfeld is being treated at meetings like “an eccentric old uncle who is ignored.”  Rumsfeld fired back, “If you believe everything you read in Maureen Dowd, you better get a life.”

What follows is a full transcript of this segment, and a video link courtesy of Ian Schwartz and Expose the Left. 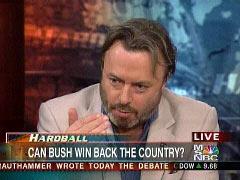 Seemingly on every evening's Hardball, Chris Matthews enjoys chanting a mantra of allegedly failed Bush administration promises on Iraq. Chief among them is his taunt that the White House claimed that our troops would be greeted as liberators.