Media Research Center President Brent Bozell issued the following statement regarding the blatant hypocrisy uncovered about the New York Times. Over the weekend, the Times reported a story about Republican presidential candidate Donald Trump’s tax returns.  The returns may have been obtained and published illegally. This comes just weeks after the top editor at the paper, Dean Baquet, said he would risk jail time to obtain Trump’s tax returns.

In 2009, the Times refused to report the leaked ClimateGate emails that showed how the left was lying to the public about climate change. At the time, the paper explained its refusal to report this story because the ClimateGate emails were ‘acquired illegally and contain all manner of private information and statements that were never intended for the public eye, so they won’t be posted here.’ 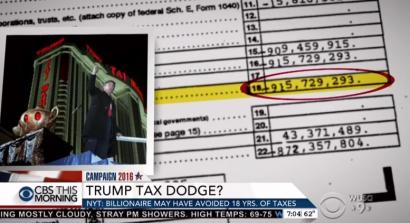 “The duplicity of the Times publishing private tax information about a Republican presidential candidate is blatantly obvious when you consider that they refused to publish the ClimateGate emails. The Times made a public editorial decision not to publish private emails exposing the ClimateGate lies because they damaged their leftwing political agenda. But here they are all too happy to publish private tax return information of a GOP candidate – in possible violation of state and/or federal law – because it advances their leftwing political agenda.

“The New York Times laid bare its hypocrisy on their Trump tax story and now they must explain themselves. If they remain silent, this will be just another example of the Times conveniently jettisoning journalistic standards when doing so would harm Republicans. If the Times is to retain any integrity in its newsroom, they must stop aiding and abetting the Clinton campaign. Sadly, no one expects that to happen.”