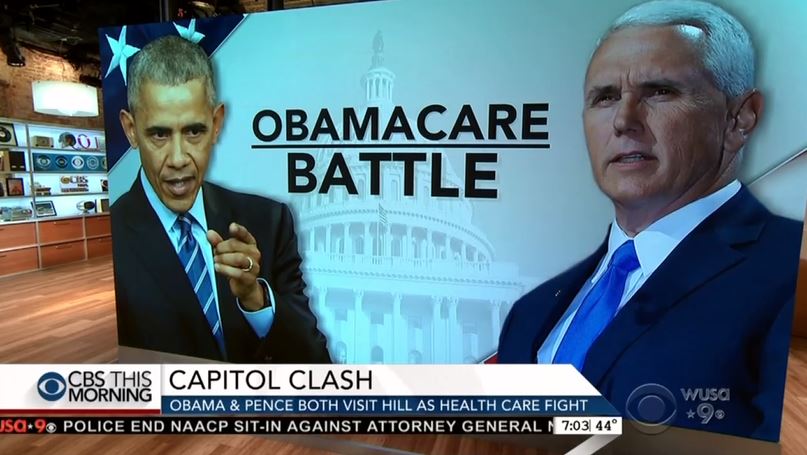 On November 5, 2008, the day after the election, CBS Evening News correspondent Chip Reid said of then-still-president George W. Bush, “he is now not only deeply unpopular, he's a full-fledged lame duck.”

But in the 57 days after the 2016 election, the morning and evening news shows of ABC, CBS and NBC haven’t used the term “lame duck” even once. By avoiding this phrasing, the networks are giving post-election Obama a legitimacy they denied post-election Bush.

Instead of downplaying President Obama’s role, the networks hyped disagreement between him and Trump, calling it a “turf war.” (Mary Bruce and Rebecca Jarvis, December 24, ABC World News Tonight).

CBS Evening News’s Elizabeth Palmer on December 30 questioned why Russia’s government would wait to respond until Trump took office, “which sends the message that Obama’s gesture was made by a president who is passe already and not even worth Russia’s retaliation.”

Correspondent Nancy Cordes on January 4’s CBS This Morning praised President Obama’s trip to Capitol Hill, “to urge Democrats to fight the good fight, to not give up on his signature achievement, to talk up the beneficial parts of the health care law and to try to get Republicans the think twice.”

Not only did the networks repeatedly call Bush a “lame duck,” they openly wished that the country would inaugurate Obama early.

On MSNBC’s Morning Joe on December 5, 2008, Dan Rather, the disgraced former CBS Evening News anchor who infamously pushed completely false information to defame George W. Bush, whined about how long the lame-duck period was: “We can’t afford to waste an hour, much less a day or a week or a month. And this business of being a lame duck President and saying, you know, ‘Adios. I’m going to the ranch. I’m just not going to do very much during this period.’ We can’t afford it....We’re in possibly, possibly the biggest crisis we’ve been in since December 7, 1941, and maybe since the time of the Civil War. So, we can’t afford to have this interregnum.”

Rather wasn’t alone in that sentiment. On November 23, 2008, New York Times columnist Tom Friedman wrote, “If I had my druthers right now, we would convene a special session of Congress, amend the Constitution and move up the inauguration from Jan. 20 to Thanksgiving Day....Just get me a Supreme Court justice and a Bible, and let’s swear in Barack Obama right now — by choice — with the same haste we did — by necessity — with L.B.J. in the back of Air Force One.”

To date, no network journalists have openly wished that Trump was already in office.