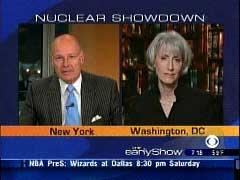 As I mentioned last week, CBS was pushing the notion that the Bush administration ought to kowtow to North Korean demands and agree to bilateral talks. This theme was again highlighted on Wednesday’s "Early Show" by co-host Harry Smith. Smith had the opportunity to speak with Wendy Sherman, President Clinton’s former North Korea adviser, and while he noted that people like former Democratic Senator Sam Nunn, whom Smith describes as "a very wise guy about this stuff," think we should talk directly with the North Korean regime, he omitted any questions about Ms. Sherman’s role in the Clinton administration and its failed polices regarding North Korea. At the end of the 7:00 half hour, Smith inquired:

"The North Koreans have said over and over again we want one-on-one talks with the United States. The Bush Administration has been quite clear they're not interested whatsoever. You have people though, like Sam Nunn from the nuclear threat initiative, a former Senator, very wise guy about this stuff says ‘why don't you go ahead and do one-on-one talks?’ What's to prevent us from doing that? Why shouldn't we do that?"

Ms. Sherman claimed she believed there ought to be one on one talks with North Korea:

"We absolutely should do it. I agree with Senator Nunn; I agree with Jim Baker who says to engage with our enemies is not appeasement. It's about being a tough negotiator, getting more than you give. And I think that it really is a strange position for the United States to be in when China, South Korea, Russia, Japan all have direct talks with North Korea and want the United States to do likewise. It's time to put the shape of the table aside and get this problem solved."