CNN's Ed Henry and Ali Velshi both think taxes should be raised in order to help reduce the deficit. However, neither gave any credence to the notion that raising taxes is detrimental in the current economic conditions on Thursday's "American Morning."

CNN's senior White House correspondent Ed Henry, reporting on the President's deficit-cutting proposals, remarked that in order to trim the deficit, both spending must be cut and taxes increased. This would mean that both Democrats and Republicans would be forced to vote for measures they wouldn't normally support.

Co-host Ali Velshi also agreed that higher taxes are necessary, and that since President Obama has had to "compromise," so to will Republicans and Democrats have to compromise on fiscal issues.  "Just as [Obama] has come around despite what happened the last election, despite the end of the year deals, despite his own debt commission and despite the showdown, the President has come around," Velshi said. 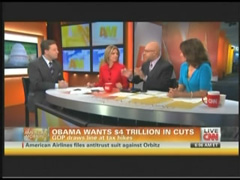 Velshi didn't just predict tax hikes for millionaires, but for those making over $250,000 as well – which could mean tax hikes on many small business owners. "What's starting to happen is people who absolutely objected to ending those Bush-era tax cuts on people earning more than $250,000 are also going to have to come around," he remarked.

The CNN anchor added that the Republican proposal "takes an ax to taxes" in cutting them by $800 billion.

In the next hour of the show, Henry reported that in President Obama's budget proposal there is one dollar in tax increases for every four dollars in cuts. Velshi chimed in that "which, economically speaking, is probably the formula that we're going to have to go with."

ED HENRY: Absolutely. And now, actually, it's going to be hard for him to raise taxes even on the rich. When you look at the Senate, the Democrats lost seats. You've got a lot of conservative Democrats like Ben Nelson of Nebraska, Joe Manchin of West Virginia up for election in 2012. They don't want to raise taxes. So it's unclear that he's gotten anywhere close to 60 votes to cut off a filibuster and get some sort of tax increase through. This is why everyone is going to have to take a step back.

HENRY: Liberals who were screaming about spending cuts, they're going to have to step up. This is a unique opportunity for the Commander-in-Chief to step in and say, look, folks, we've got to do something that not everyone wants to --

VELSHI: Just like he has come around despite what happened the last election, despite the end of the year deals, despite his own debt commission and despite the shutdown, the President has come around. What's starting to happen is people who absolutely objected to ending those Bush era tax cuts on people earning more than $250,000 are also going to have to come around. The reality is you cannot -- you can't have both ways. Taxes are likely to go up in this country.

HENRY: And what's interesting is the President now deputized Vice President Biden to go out there early May, start meeting behind closed doors with Republicans and Democrats on the Hill. The president has set a deadline by the end of June to get a deal. That sounds really ambitious. I mean, you guys know they are far apart right now.

VELSHI: The other way to overcome deficits is by increasing revenue or taxes. Let me show you what the plans call for on that front. A core to fiscal conservative beliefs is that if you cut taxes, people spend more. So the Republican plan really takes it -- takes an ax to taxes, cutting them by $800 billion and, by the way, keeping those Bush-era tax cuts for people making $250,000 or more.

CHRISTINE ROMANS: We keep saying $4 trillion in cuts but it's actually for every $3 in cuts he wants $1 in tax increases. So it's cuts and tax increases, it's getting new revenue, and cutting what we've already been spending --

VELSHI: Which economically speaking is probably the formula that we're going to have to go with to be sound.

HENRY: And you don't have enough money to put a dent in the deficit if you only do one or the other.

ROMANS: The national debt, no matter what, just keeps going up. We're talking about cutting deficits. But we're still adding to the debt all along the way.