Snark on, Michelle!  On the MSNBC show "Up With Chris Hayes" this morning, feminist author Michelle Goldberg attacked Ann Romney as "insufferable" and derided a phrase in Ann's op-ed on the subject of motherhood as "creepy."

Goldberg's "insufferable" shot drew approving laughter from the all-feminist panel.  And surely the attacks on the Romneys for their traditional family values will play well with a certain segment of the electorate. The problem for President Obama: that segment is one that is already almost entirely in his camp.  But these sort of mean-spirited attacks are likely to alienate the very voters in the middle that PBO needs to persuade.  Video after the jump. 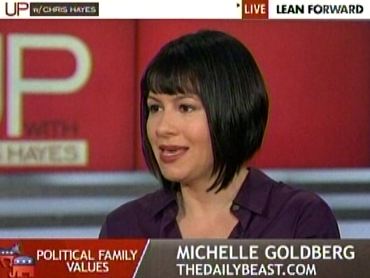 Watch Goldberg unwittingly play into Republican hands by exemplifying how the most enthusiastic Obama backers are fundamentally unsympathetic to the kind of woman, in the person of Ann Romney, that the great majority of Americans surely find admirable.

Note: not to be out-snarked by Goldberg, Hayes himself said of Ann Romney's op-ed "I don't want to say it reads a bit like a hostage video, but . . . "  Happy Mother's Day to you too, Chris!

MICHELLE GOLDBERG: I wonder: I mean, it can't only be me that maybe inititally saw Ann Romney as maybe a sympathetic or neutral figure but who is increasingly seeing her as someone who is kind of insufferable because of the way she's milking this thing.  And, you know, in a lot of ways the op-ed was totally anodyne, right?  You know, yes, motherhood is beautiful.  I find that phrase, "the crown of motherhood" really kind of creepy.  Not just because of its, like, somewhat, you know, I mean it's kind of usually really authoritarian societies that give out, like, the Cross of Motherhood.