Mike Allen might not be a Republican political strategist, but he tried playing one on TV today, telling the GOP it was "crazy" and "suicidal" to be supporting Doug Hoffman over Dede Scozzafava in a special congressional election in northern New York.

MIKA BRZEZINSKI: Voters in New York's 23rd District are electing a congressman next week, and many powerful Republicans, including Sarah Palin and Tim Pawlenty, have already made their endorsement for the third-party candidate over the Republican nominee.

MIKE ALLEN: Well this is crazy, this is a suicidal move by Republicans.  Because the nominee up there is pro-abortion rights, is not sufficiently conservative, the Republican establishment is turning against her. They even accused her of being associated with ACORN, and are going for this conservative [Doug Hoffman].

It's not a matter of Dede Scozzafava being accused of associating with ACORN, as Allen archly put it.  She IS associated with ACORN, having accepted the endorsement of ACORN's political front in New York, the Working Families Party, in her runs for state Assembly.  Fortunately, Joe Scarborough was there to set the record straight.

JOE SCARBOROUGH: Except in this case, there are those of us who are economic conservatives who find it hard to support somebody that supported President Obama's stimulus package--Nancy Pelosi's stimulus package.  And supported card check [the abolition of the secret ballot in unionization elections].  That voted with David Paterson more than a lot of Democrats in Albany. She is not—not only is she not conservative, she's not moderate . . . I don't expect social conservatives in the Northeast, but I sure as hell do expect economic conservatives.  Why would any Republican support this woman, who again is far left even of Democrats who she serves with in the New York State legislature.  This is a bizarre move by the New York Republican party, Mike.

ALLEN: Well, I agree that nominating her was perhaps the original sin, but Newt Gingrich, no flaming liberal, says that [supporting Hoffman] is a mistake; he goes with the shirts and skins, you need to get the 'R,' the number next to the letter 'R,' it needs to get higher if Republicans are going to be a majority.

SCARBOROUGH: Well let me just say about Newt Gingrich, Newt also worked against conservatives in 1994, like me, they found moderate Republican candidates --

SCARBOROUGH: I'm just saying, Newt outthinks himself sometimes, he did in '94, he worked against people like me, Dave Weldon, others.  And what we heard from the NRCC was "oh, you're too conservative to win.  Pat Buchanan and Phyllis Schlafly scared everybody in '92.  The only way we're going to take power in '94 is by reaching out to moderates."  That isn't how that story ended up. So, a lot of us think Newt is making that mistake again.  But what do we know? 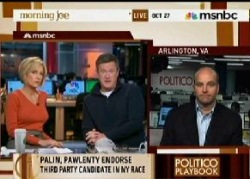 Surely Allen knows that if elected, Hoffman, a lifelong Republican, would caucus with the GOP.  He must also know that, as Politico itself has reported, the latest poll shows Hoffman with a lead in the race.  So who's crazy now?  Allen does great reporting with his Playbook.  May we suggest Mike stick to his successful knitting and forget about a second career as a strategerist?
Campaign Watch Campaigns & Elections 2010 Congressional MSNBC Politico Morning Joe Video Doug Hoffman Newt Gingrich Dede Scozzafava