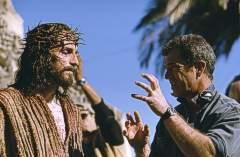 Right up there with "dog bites man," the news that Mel Gibson doesn't like "The Da Vinci Code" should come as no surprise. The creator of the film "The Passion of the Christ" thinks it could mislead some.

Mel Gibson has slammed The Da Vinci Code for attacking his religious beliefs.

Parade on the March Again, Downbeat on Economy

NYT Publisher Sulzberger Goes on a Left-Wing Rant at Graduation

As keynote commencement speaker, New York Times Publisher Arthur Sulzberger Jr."apologized" to graduates at the State University of New York at New Paltz on Sunday for the failure of his generation to stop the Iraq War and to sufficiently promote "fundamental human rights" like abortion, immigration, and gay marriage.

Paul Kirby of Kingston's Daily Freeman quoted from Sulzberger's address, which he began with a facetious "apology" to the class for being part of the generation that let them down due to insufficient liberal activism.

"'I will start with an apology,' Sulzberger told the graduates, who wore black gowns and hats with yellow tassels. 'When I graduated in 1974, my fellow students and I ended the Vietnam War and ousted President Nixon. OK. OK. That's not quite true. Maybe there were larger forces at play.'"

By Greg Sheffield | May 22, 2006 11:40 AM EDT
AR15.com notices that ABC News used a former Salon.com writer and former employee of Handgun Control Inc. to cover the National Rifle Association

You may have noticed the byline on ABC News recent story covering the NRAs pledge to ask mayors and police chiefs to sign a petition stating they will uphold their legal duties not to confiscate weapons from law-abiding citizens during time of crisis a la Katrina.

Hmmmm, you mean the Jake Tapper who used to write for Salon.com? I wonder what happens if we google his name and the words "NRA"...

The Dixie Chicks: A Profile in Courage, Says NYT

Times music critic Jon Pareles thinks the anti-Bush country group The Dixie Chicks were right all along in Sunday’s front page Arts & Leisure feature, "The Dixie Chicks: America Catches Up With Them"

"The Dixie Chicks call it 'the Incident': the anti-Bush remark that Natalie Maines, their lead singer, made onstage in London in 2003. 'Just so you know, we're ashamed the president of the United States is from Texas,' said Ms. Maines, a Texan herself. 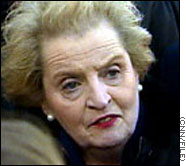 Imagine you're a newswire editor writing the headline for a story in which former Secretary of State Madeleine Albright has accused Pres. Bush of 'religious absolutism.' What would be a fair headline? Something like:

Something frighteningly ominous has been happening on the Internet lately: Google, without any prior explanation or notice, has been terminating its News relationship with conservative e-zines and web journals.

Rep. John Murtha (D-PA) appeared on CBS' The Early Show this morning, along with several others, to discuss winning the JFK "Profiles in Courage" award.

During the interview, Murtha went on an anti-War rant, to which The Early Show's co-anchor Julie Chen said nodded in agreement and said "absolutely":

MURTHA: And I said there's not only no progress, it's worse than it was pre-war. This thing has been mishandled so badly. The american people need to hear. We're spending $450 billion on this war by the end of the year, $9 billion a month, and so we need to change course.

'Today' Touts Pick of Murtha and Mora as 'Profiles in Courage' 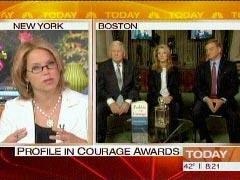 "Let every nation know, whether it wishes us well or ill, that we shall pay any price, bear any burden, meet any hardship, support any friend, oppose any foe, in order to assure the survival and the success of liberty." JFK Inaugural Address, 1961

"We can do just as much by withdrawing our troops." John Murtha, Winner, Profile in Courage Award, 'Today' show, 5/22/06

It's a spicy set of covers on the news magazines this week. U.S. News asks how low Bush can go in the polls. Newsweek is having another agnostic's crush on Mary Magdalene. But Time magazine wins the liberal-bias award for promoting the Dixie Chicks on its cover with the words "Radical Chicks." (Cover copy: "They criticized the war and were labeled unpatriotic.") Josh Tyrangiel's cover story begins predictably by hailing the lead singer:

Will Rather Leave CBS? 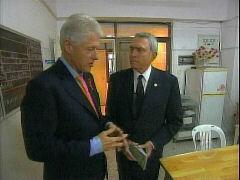 Have CBS and Dan Rather had it with each other?

Maybe fiction is dead after all. Several hundred literary worthies were gathered up by the New York Times and asked to name the best work of fiction over the past 25 years, and the winner was – Toni Morrison, that is, her book “Beloved.” Books by John Updike, Philip Roth and Don DeLillo got most of the votes after that for literature’s version of MVP.

By Warner Todd Huston | May 21, 2006 5:52 PM EDT
The New York Times seems to be quite confused by all this DaVinci Code stuff. All this focus on religion must be too much for them. The latest is a May 21st article by Laurie Goodstein titled “It's Not Just a Movie, It's a Revelation (About the Audience)” that claims, among other misleading things, that Gnosticism is said to be somehow new on the Christian religious scene.

Film Critics As A Whole Give 'DaVinci Code' A Sad C

If you would like to see the range of opinion among film critics on "The DaVinci Code," one very nice inventory of major-media reviews can be found at metacritic.com. It earned a 48 out of 100, well below this weekend's new cartoon, "Over the Hedge," which averaged out to 67.

For a comparison, you can see that "The Passion of the Christ" averaged just about the same, a 47.