At an event in Louisville, Kentucky Wednesday afternoon, President George W. Bush said that “I expect there to be an honest debate about Iraq” and he urged people to be “mindful about what messages out of the country can do to the morale of our troops.” He went on to “welcome the voices of people saying, you know, ‘Mr. President, you shouldn't have made that decision,’ or, you know, ‘you should have done it a better way,’” but castigated those who say “‘he lied.’ Or, ‘they're in there for oil.’ Or ‘they're doing it because of Israel.’ That's the kind of debate that basically says the mission and the sacrifice were based on false premise.”

But on Wednesday’s World News Tonight, Martha Raddatz centered an entire story around, in response to the question of “How can people help on the war on terror?", this soundbite from Bush: "One way people can help as we're coming down the pike in the 2006 elections, is remember the effect that rhetoric can have on our troops in harm's way." That was all viewers heard from Bush -- nothing about how he was specifically admonishing politicians against derisive “Bush lied/war for oil/blame the Jews” hate speech. Nonetheless, Raddatz then moved to discredit Bush’s point by highlighting how “Marine Corps reservist Andrew Horne, a two-time Iraq veteran and now a congressional candidate” asserted that “the President is attempting to limit debate about the war because it is not going well." Horne then denounced Bush for trying to censor the very kind of “honest” analysis Bush specifically said was within bounds: "I don't think, you know, honest criticism damages morale at all, you know. When I was there, it didn't damage my morale one bit."

Raddatz recited how nine of eleven Iraq war vets running for Congress are Democrats, before she wrapped up: "The Republicans are clearly worried about some of these candidates and the war in Iraq, or the President wouldn't keep making these speeches, Bob." Co-anchor Bob Woodruff then endorsed her spin: "Good point.” (Transcripts follow.)

In a new column just posted at MSNBC.com, Newsweek’s Michael Hirsh offered some truly defamatory comments concerning America’s current president. In fact, much of this article could have been written by Harry Belafonte.

“In fact, [Iranian President] Ahmadinejad, who has piled idiocy upon idiocy in a series of offensive remarks that have alarmed the world, has achieved a truly amazing feat. He has made George W. Bush look like a statesman.”

Gloria Borger on the “CBS Evening News” tonight demonstrated some humanity and compassion that is quite rare and sorely lacking from most members of the modern American media. In her report today about the Samuel Alito confirmation hearings, Borger stated that Mrs.

By Greg Sheffield | January 11, 2006 4:30 PM EST
Columnist Todd Manzi describes why left-wing media bias is advantageous to liberals in terms of marketing principles, and why new conservative media outlets are ineffective at targeting the masses.

Some Left-Wing Associates of an NYT "Whistleblower"

Gun Control: The Promotion of Denial

Have you ever asked yourself: Why, when evidence overwhelmingly shows gun banners are wrong, do they persist in making outrageous claims about law-abiding gun owners? There may finally be an answer, so read on.

A piece by Neil Lewis in today's Grey Lady has a curious pseudo-profile of some of the prosecutors (led by head prosecutor Noel Hillman) who cut the plea bargains and deals in the Abramoff case. Members of the Department of Justice's Office of Public Integrity are highlighted in the piece. It begins with a somewhat misleading lede, which is an indication of the cloudiness to come:

Sam Alito fans must feel confident when the Washington Post Style section is mocking the Democrats for their "tender roast" of Alito. Marcia Davis writes lightly about how the Democrats promised a feisty brawl, but didn't deliver. When Sen. Cornyn suggested Alito was a lock, Davis wrote:

By Lyford Beverage | January 11, 2006 8:11 AM EST
This morning's AP article on the Alito hearings from yesterday is actually fairly straight, at least by the Associated Press' normal standards. But there are still examples of typical AP anti-conservative bias. 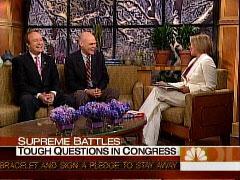 As we detailed here, on yesterday's Today show Matt Lauer yesterday blurted out in the midst of an interview "let's face it, [Alito] is an ultra-conservative."

If that weren't slur enough in the liberal mindset, Dem strategist James Carville continued the assault on this morning's Today, accusing Alito of being: "completely enamored and impressed with power."

By Tom Segel | January 11, 2006 3:59 AM EST
In the latest issue of The Weekly Standard there is an interesting article by Stephen F. Hayes titled “Saddam’s Terror Training Camps”. In it the author reports the former Iraqi regime of Saddam Hussein... “Trained thousands of radical Islamic terrorists from the region at camps in Iraq over four years immediately preceding the U.S. invasion, according to documents and photographs recovered by the U.S. military in postwar Iraq.”

Now this can’t possibly be correct.

As reported on tonight's O'Reilly Factor (January 10, 2006), Sunday's episode of NBC's Dateline (January 8, 2006) declared that recent attacks on the traditional meaning of Christmas were a "giant, laughable lie."

A segment on blogs narrated by Josh Mankiewicz also aired a snippet from Bill O'Reilly's recent appearance on Letterman's Late Show. Which snippet? The part where Letterman told Bill, "I have the feeling about 60 percent of what you say is crap." Real balanced, eh?

From the Dateline segment, as shown on the Factor tonight (available at foxnews.com) (emphasis mine):

MANKIEWICZ (voiceover): "That nutty war on Christmas thing got plenty of traction on the blogs before it ever hit your TV set. Now a lot of bloggers say it's finally been put to bed."

LETTERMAN (snipped from O'Reilly's guest spot): "I have the feeling about 60 percent of what you say is crap." (audience laughter)