Less than 36 hours after the indictments of I. Lewis Libby were announced, America’s first poll results concerning the matter were released just in time for them to be part of all the Sunday political talk shows tomorrow morning.

“55 percent of the public believes the Libby case indicates wider problems "with ethical wrongdoing" in the White House, while 41 percent believes it was an ‘isolated incident.’ And by a 3 to 1 ratio, 46 percent to 15 percent, Americans say the level of honesty and ethics in the government has declined rather than risen under Bush.”

The poll also puts Bush’s job approval at 39 percent. Yet, one has to wonder about its methodology. As the article indicated, “The survey of 600 randomly selected Americans represents a snapshot of initial reactions to the Libby indictment.” To be sure, 600 is an extremely small sample. Moreover, there is no indication of what the breakdown was of Democrats, Republicans, and Independents surveyed, which is particularly important given the belief by most pollsters that weekend surveys normally produce a greater percentage of Democratic respondents than is representative of the population. Regardless, the article by Post journalists Richard Morin and Claudia Deane made some pretty grave conclusions from this data:

At “The Huffington Post’s” blog, Al Franken’s most recent post is called, “Happy Fitznukkah, Everybody!” In it, Franken expressed hope that yesterday’s indictments of I. Lewis Libby weren't a “one-day holiday like Fitzmas” - a not-so comical conglomeration of the words Fitzgerald and Christmas - and waxed elatedly about the possibility of other presents to come such as indictments to Ari Fleischer and Karl Rove:

“The only disappointment was the lack of a ‘treason’ indictment. Looks like thirty years is the most Scooter will get. But who knows? He might get squeezed and end up ratting out the other guys, and get only eight to twelve.”

Yet, maybe the most enlightened opinion - and certainly the most comical - at this thread was posted in the comments section:

One angle the major media hasn't underlined in the current explosion of Plamegate coverage is the legislative origins of the scandal in the passage of the Intelligence Identities Protection Act. As much as liberals like Al Franken love to say they oppose treason, the bill was opposed by a handful of liberals and Democrats. Some nuggets from the Washington Post coverage follow.

President Reagan signed it, and some left-wingers protested from June 24, 1982:

Journalism For Sale At The Newark Weekly News

When it was revealed that conservative columnist Armstrong Williams had received payments for advocating certain positions of the Bush administration, the MSM and the left had a field day. Williams was forced to defend himself on the morning talk shows and was parodied by syndicated cartoons. Most conservatives also rightly criticized Williams.

As it so often does, the Associated Press likes to play word games, especially when it comes to stories on Republicans.

Here's another nugget of recent media history on indictment coverage of Democrats. While the networks have found a grave problem in Vice President Cheney's office in Scooter Libby, the same networks weren't hot to report the indictment of Maria Hsia, who helped arrange Al Gore's infamous Buddhist Temple fundraiser. On July 8, 1998, in the middle of Monicagate, Brent Baker reported in the CyberAlert that Hsia was indicted:

While introducing an interview with former Nixon White House Counsel John Dean on his Countdown show Friday night, MSNBC's Keith Olbermann implied that Plamegate is worse than past White House scandals because, in contrast to scandals from the Nixon, Reagan, and Harding administrations, a sitting White House staff member has been indicted. Referring to Bush supporters who were offended by the title of Dean's book, Worse than Watergate, Olbermann quipped that because of Libby's indictment, "the protests about John Dean's title might instead be coming from the fans of Presidents Nixon, Reagan and Harding."

NBC and CBS Trumpet Sunday Night Interviews with Joe Wilson, "NBC's Got Him!" 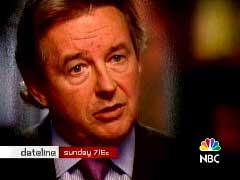 In a ten-second promo at the end of Friday's NBC Nightly News, an announcer excitedly promised, “Sunday: Joe Wilson, the man at the center of the CIA leak scandal and NBC's got him!” Viewers then saw a short clip of Wilson as he sat across from Campbell Brown: “The White House trained their guns on me.” Back to the announcer with matching text on screen: “The Dateline interview: Sunday 7, 6 Central.” CBS ran its plug for 60 Minutes

MoveOn.Org Continues to Mislead its Members

In a recent posting by Tim Graham, MoveOn.Org vs.

Russert: First Indictment of a White House Official in 130 Years

By Mike Bates | October 28, 2005 6:50 PM EDT
After weeks of joyous anticipation by many in the media, a Bush Administration official, I. Lewis “Scooter” Libby, was today indicted by a federal grand jury. NBC's Washington bureau chief Tim Russert wanted to emphasize the event's importance, telling his MSNBC audience: "This is significant, it's the first time in 130 years a White House official has been indicted."

Not according to MSNBC's own Web site. It's "Fact File: White House Staff Indictments" provides a "brief

Brokaw: “What Did Cheney Know & When Did He Know It?”; Scolds Media Speculation 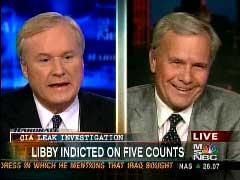 “The real lingering question for me is,” former NBC anchor Tom Brokaw asserted on the 5pm EDT Friday edition of MSNBC's Hardball, “was this a one-man band, or were there others in the administration who were linked to his efforts?” Brokaw added, as if it were the natural thing to wonder about: “And, of course, the question that will be raised by a lot of people not in any way fans of this administration, 'what did Dick Cheney know and when d

An interesting contrast occurred on the morning shows regarding ExxonMobil’s record high quarterly earnings. Over at CNN’s American Morning, Miles O’Brien and Andy Serwer fretted over ExxonMobil’s announcement, with O’Brien declaring it the, “outrage moment of the morning.” Meanwhile, Good Morning America’s financial contributor Mellody Hobson explained how the profits were a result of supply and demand.

By Lyford Beverage | October 28, 2005 5:30 PM EDT
Prosecutor Patrick Fitzgerald had a long news conference this afternoon, addressing the end of service of his Grand Jury and the indictments handed down on I. Lewis "Scooter" Libby. Shortly thereafter, the talk station to which I listened after the PC ran a newsbreak at 3:30 PM EST. During that break, they ran the ABC news, and one of the stories was, of course, the indictments.

Patrick Fitzgerald Does a 'Star' Turn as Captain Queeg

This is a very curious press conference just conducted by Special Counsel Patrick Fitzgerald. With his machine-gun delivery, he repeatedly flopped back and forth between saying that the “outing” of Valerie Plame, wife of discredited Ambassador Joe Wilson was a “serious matter,” and saying that he “reached no conclusion” whether she had been outed, and if so, when and by whom.

"Escaped"?  Did he scale the wall at the Big House?  Pull a Shawshank Redemption and slip out through the sewer system?