The Morning After: Nets Criticize Trump 8X More Than Dems

Wednesday’s network morning shows provided an avalanche of negative reviews for President Trump’s Oval Office address to the nation calling for border security legislation to end the government shutdown, with anchors and correspondents offering up a staggering 43 statements critical of the presidential speech. By contrast, only a scant five critiques were made of the Democratic response delivered by House Speaker Nancy Pelosi and Senate Minority Leader Chuck Schumer.

The glaring disparity in negative coverage of Trump versus congressional Democrats, a difference of over eight to one, also included 13 statements in which both sides of the aisle were blamed for the budget impasse. However, the analysis of the dueling public addresses on the NBC, ABC, and CBS broadcasts was heavily slanted against the President. 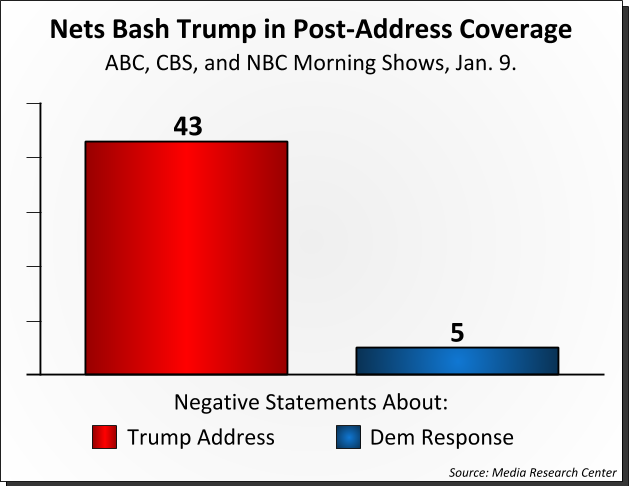 NBC’s Today show featured a total of 13 statements critical of Trump’s speech but only three statements critical of the Democratic response. Three statements criticized both sides. Correspondent Peter Alexander set the tone early on by proclaiming: “Now 19 days into a government shutdown, a political stalemate all but ensuring that 800,000 federal workers will not get paychecks this Friday, the President is not offering a single new proposal or idea, instead emphasizing the same dire message about violence and crime that helped propel him to the White House.”

Delivering a news brief at the 7:30 a.m. ET half hour, co-host Savannah Guthrie declared: “The President says the country faces a crisis at the border. He offered little in the way of concessions to break the standoff that has left parts of the government closed for 19 days.”

One of the few statements critical of Democrats on the NBC morning show came from White House correspondent Kristen Welker, who noted: “The fact is, some Democrats, including Schumer, have voted for border barriers in the past, including the Secure Fence Act of 2006, which authorized a 700-mile fence between the United States and Mexico.”

ABC’s Good Morning America similarly offered 12 statements critical of Trump in its coverage, with not a single statement critical of Pelosi and Schumer. Three statements laid blame on both parties. Correspondent Cecilia Vega lamented: “That speech last night brought both sides nowhere near closer to reaching a deal to end this shutdown.” Moments later, she hammered the President: “In his ten-minute speech riddled with factual inaccuracies, the President argued there is a crisis at the southern border.”

Again, not one comment was offered by any of the show’s journalists that criticized the Democrats’ presentation.

Finally, CBS This Morning provided an overwhelming 18 statements ripping Trump, while only two statements challenged the Democrats. Five statements characterized both sides as responsible for the government shutdown. “The prime-time platform was new. The arguments, very, very familiar. Notably absent, any new proposals from the President or any hint of concessions that might resolve the ongoing partial government shutdown,” correspondent Major Garrett scolded.

At the top of the 8:00 a.m. ET hour, co-host John Dickerson told viewers: “The President’s demand for a border wall led to the budget standoff that caused the shutdown. In his first prime-time Oval Office address, Mr. Trump repeated many of his arguments for the wall, along with some misleading information.”

Like NBC’s Welker, Garrett provided a single fact-check on Democrats suddenly claiming any border barrier to be “immoral”: “Democrats haven’t always been against funding a southern barrier. In 2006, Senator Schumer and other Democrats supported legislation for fencing on the border.”

Surprisingly, the only other criticism of Democrats on the CBS program came from co-host Gayle King, who commented on the poor optics of Pelosi and Schumer’s address: “It was interesting to see Nancy Pelosi and Chuck Schumer. They both looked sort of startled like deer in the headlights the way they were talking.”

After initially fretting over whether or not to even cover Trump’s speech, the networks eagerly tried to appease Democrats by trashing the address.