In a fawning interview with Bill Clinton on Tuesday's NBC Today, co-host Ann Curry played an ad from the former president's 1992 campaign and remarked: "First of all, how cute were you and your hair hasn't changed. But number two, but number two, you talk about vision there and leadership. So what is President Obama's vision on the economy?" [Audio available here]

Moments later, Curry noted high disapproval of Obama's handling of the economy and wondered: "You know, you often speak of your wife's extraordinary gifts. Do you ever think that the country would be better off if she had won the presidency?" [View video after the jump]

Despite talking about the current presidential campaign with Clinton, Curry avoided asking him for comment about sexual harassment allegations against Herman Cain.

Curry fretted over some of Clinton's critiques of Obama in his new book, "Back to Work": "I want to point out that you also point out a number of mistakes made by President Obama and the Democratic Party....Why offer these criticisms now in this book, are you concerned that they are fodder for the Republican Party?"

However, Curry was back to heaping praise on Clinton as she wrapped up the interview: "Alright, well clearly you want us all to work together so we can get back to work and Bill Clinton, thank you for caring so much about America to write this book." Clinton replied: "Thank you. I do."

Here is a full transcript of the November 8 interview:

ANN CURRY: Well, we have somebody here, Matt, who loves history, and that's President Bill Clinton. He's here out with a new book offering his ideas for turning around the economy. So we're going to talk to him about that and the current presidential race.

CURRY: We're back now at 7:41 with former President Bill Clinton. The nation's unemployment rate now stands at 9% with 14 million people out of work and President Clinton is offering his proposal to get people off the unemployment lines in his new book, "Back to Work: Why We Need Smart Government for A Strong Economy." Mr. President, good morning.

CURRY: "Back to work" is a prescription for economic renewal. Is there anything that could be done right now that is not being done that could spark the movement towards creating more jobs?

CLINTON: Yes, but it won't bring us all the way back. Let me explain what I mean. What happened to us was we had a financial collapse and a real estate collapse. If you go back 500 years, when countries do this, it takes a long time to get over, sometimes five to ten years, sometimes even longer. So I wrote this book to try to explain how we can beat those odds, but there's no instantaneous fix.

I think the President's proposals on the payroll tax cuts for employers and employees would help and I think they should pass. Then I think we have to get the money going into the economy again, which means you have to get the bank money released, primarily that's reforming the mortgage crisis, get corporations to invest back in America again. There's $4 trillion in banks and corporations that could be invested here, and that would take the world out of the financial crisis.

CURRY: The question is, what is going to get them to invest that money? And you just mentioned that you compliment the President on some of his policies but I want to point out that you also point out a number of mistakes made by President Obama and the Democratic Party, including not making a stronger case for efforts to stabilize the economy in 2009, failing to craft an effective national campaign message to counter the Tea Party's anti-government rhetoric of 2010, and bungling their response to the country's debt by not choosing to raise the debt ceiling in 2010 when they had a Democratic majority in the House. Why offer these criticisms now in this book, are you concerned that they are fodder for the Republican Party?

CLINTON: First of all – No. Well, probably because this is the second you question you asked me. Which proves the thing I said in the book. The first half of the book is what happened to us politically and economically in the last 30 years. Conflict makes better politics and news coverage, cooperation makes better economics. So the second question out of the box. The book lavishly praises the administration's economic policy, it's energy policy, this whole thing, and the second question I get asked is this. This is the way America works.

CURRY: But you do criticize the president.

CLINTON: No, well, first of all, I made a mistake, as it turns out, on the debt ceiling, because I didn't think it was subject to the filibuster. Turns out the White House told me, Gene Sperling told me they did try to raise the debt ceiling and Senator McConnell said he wouldn't do it unless they caved to all their demands. But on the other thing, I also pointed out we made the same mistake when I was President in 1994, we didn't run a national campaign. So the debt – the Tea Party line basically was the only thing people heard.  But I think that the important thing is what are we going to do now and what works best in real life is cooperation, not conflict, and so we got a big disconnect between where our politics have worked, conflict works, and the way our economics works.

If you look at Silicon Valley, if you look at San Diego, where they have the Human Genome Center and more Nobel Prize-winning scientists than in any other city. Look at Orlando, where I was yesterday, where they have a hundred computer simulation companies. Look at Cleveland, where the Cleveland Clinic and the Cuyahoga Community College are training these mid-career people with high school educations who've lost their jobs and are desperate to go back into health care work. Pittsburgh switching from steel to nanotechnology, all of these places you got the government and the private sector working together. That's what works.

CURRY: You say cooperation. I want to play you a clip, because it's not the only thing I think you've said that has worked. In 1992, there was a presidential campaign video in which you talked about something else. I want to show you that video.

CLINTON: We've got to put our own house in order and restore the middle class, reduce poverty, bring this country together again. I've got a fine national economic strategy for the short and long run, but in the end, a plan is just a piece of paper. To make it change lives you need leadership and vision and action. That's been the work of my life and that's why I'm running for president. 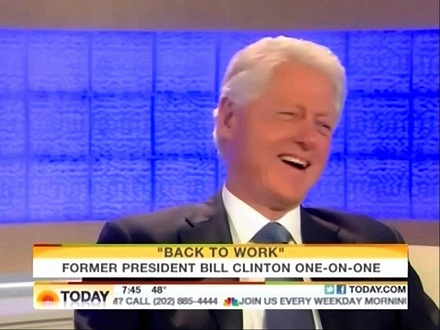 CURRY: First of all, how cute were you and your hair hasn't changed. But number two, but number two, you talk about vision there and leadership. So – so what is President Obama's vision on the economy?

CLINTON: He wants to work – he wants it to work for everybody. He wants to have broad-based prosperity, shared prosperity, a growing middle class again, not the kind of growth we had in the last ten years where almost all the income gains went to the top 10%, most of that to the top 1%, and you had median income declining, as it still is, poverty rising, that doesn't work. To build a shared economy, with shared prosperity, you have to have growing jobs, and until you get job growth, until you get economic growth, we can't balance the budget. I don't care what you do. They're finding that now in the UK. You can cut spending, you can raise taxes, you can do whatever you want. If you can't balance the budget until we grow this economy again.

CURRY: I want to know if you – what you think about this, because when you look at the President's disapproval rating on the economy, it's 57%, according to the latest poll. You know, you often speak of your wife's extraordinary gifts. Do you ever think that the country would be better off if she had won the presidency?

CLINTON: I don't think about it.

CLINTON: Because I deal with the world as it is. I think he's done a better job than he's getting credit for. I think he now has a congress that doesn't want to do anything with him, and until the American people send them a signal that they want – send the Tea Party Republicans a signal – that they want cooperation, you're going to have trouble. And I think it's unfair to compare President Obama adversely to me. They're talking about my last five years as president, the proper comparison is what happened to me in 1995, in my third year, same thing that's happened to him. We went through the same thing, not much happened. We fought, then there were two government shutdowns, and the voters decided they agreed with the approach I was taking. The congress got the message, then we started working together.

So there hasn't been an action-forcing event yet. And you can see by this book I essentially I agree with his energy policy. Green technology jobs are growing at twice the rate of ordinary jobs. We've lost manufacturing jobs every single year in the eight years before he became president. We've got a chance to get them back again. He's got a good export strategy, he's got a great idea for this infrastructure bank that puts private money and public money together. This book is about how to do this. It's not about politics. His politics will improve when the economy gets better. But the American people need to send a signal to Congress that they want them to work together. Not that he's right all the time or that I was right. They've got to work together.

CURRY: Alright, well clearly you want us all to work together so we can get back to work and Bill Clinton, thank you for caring so much about America to write this book.

CLINTON: Thank you. I do.

CURRY: And the book, again, is called, "Back to Work."