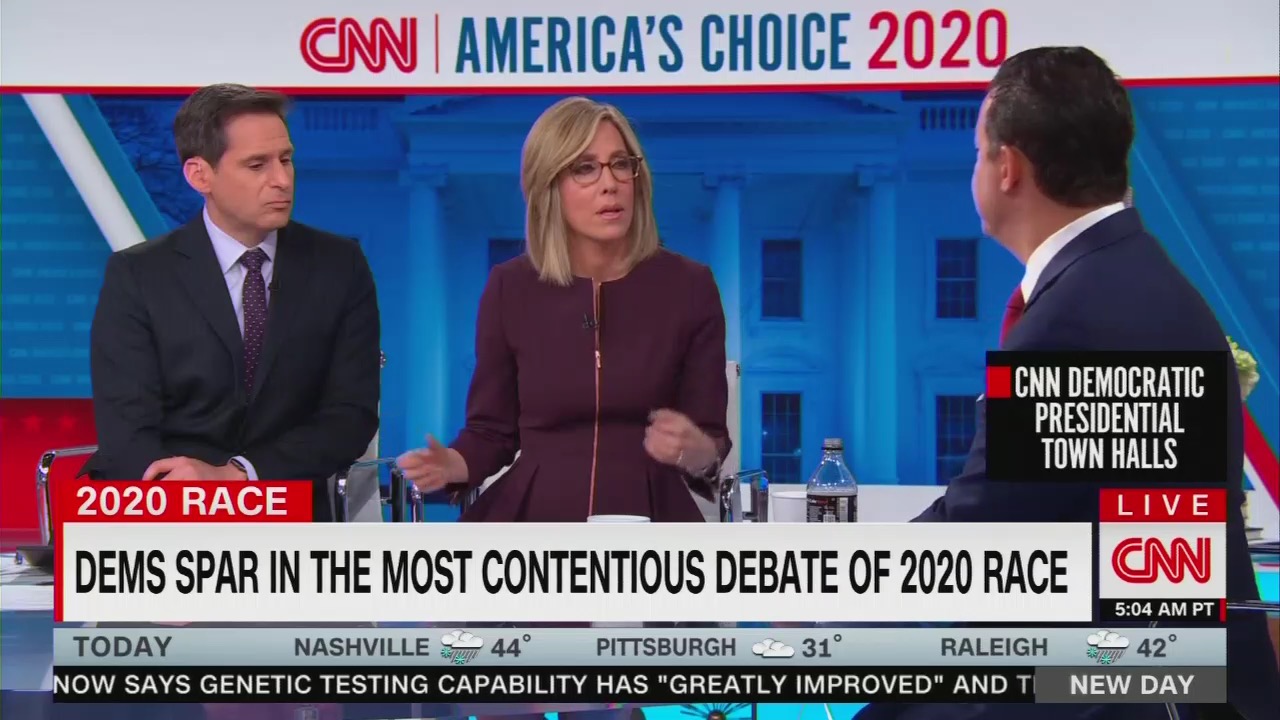 The morning after the Democratic primary debate in Las Vegas Wednesday night, CNN host Alisyn Camerota was very worried Democrats were being too harsh on each other. In particular, she was bothered by the candidates comparing Michael Bloomberg to President Trump.

During CNN’s three hour New Day show which Camerota co-hosts with John Berman, she repeatedly asked her guests to confirm how scary it was for Democrats to make “moral equivalencies” between Democrats and Trump.

It began at the top of the 7am EST hour, after commentator Paul Begala blasted the “Democrat demolition derby.” Camerota fretted to fellow panelist David Gregory that Elizabeth Warren was making a “hurtful” “moral equivalency” by comparing Michael Bloomberg to Trump during last night's debate:

“David Gregory, do Democrats also take a huge risk if they compare anyone on that stage, any of their alleged allies or at some point they'll need them to President Trump? Is that kind of moral equivalence helpful or hurtful for Democrats?” she worried.

Again during the 7am hour, Camerota seemed offended by Democrat candidates going after Amy Klobuchar for not knowing the name of Mexico’s president. She mocked President Trump’s foreign policy knowledge to political correspondent Arlette Saenz, panicking that there would be irreparable “damage” done by Democrats eating each other:

One person who wasn't one stage as much as he has been in previous debates was President Trump, Arlette. I mean, they were going after each other for forgetting a name of a foreign leader? When certainly there are criticisms that, you know, President Trump could take for handling a foreign policy, et cetera. We all know those. And so, you know, obviously this is what happens in a primary. We get it. They go after each other. Somebody needs to emerge victorious. But there is a question of, at what point is too much damage done and are they all sort of tarnished by this process?

Saenz touted President Obama “warning” Democrats of becoming a “circular firing squad” and taking their focus off President Trump. She also complained that there wasn’t enough Trump bashing during the debate:

“And while they were attacking each other and trying to get to best of each other, their focus was taken away from their target at the end of -- over in November. Which is President Trump. And there were only a few moments in the debate where you heard these candidates trying to make contrast with him,” she stated.

Again, during the 8 am hour Camerota seemed aghast that Democrat candidates would make a "moral equivalency" between President Trump and their competitors:

On the flip side, John Avlon, you talk to us so often about moral equivalence and avoiding it and situational morality and avoiding it. And do you think there was some danger just for the Democrats in general of Elizabeth Warren seeming to compare Michael Bloomberg and Donald Trump in terms of the moral equivalence of, for instance, their derogatory comments about women?